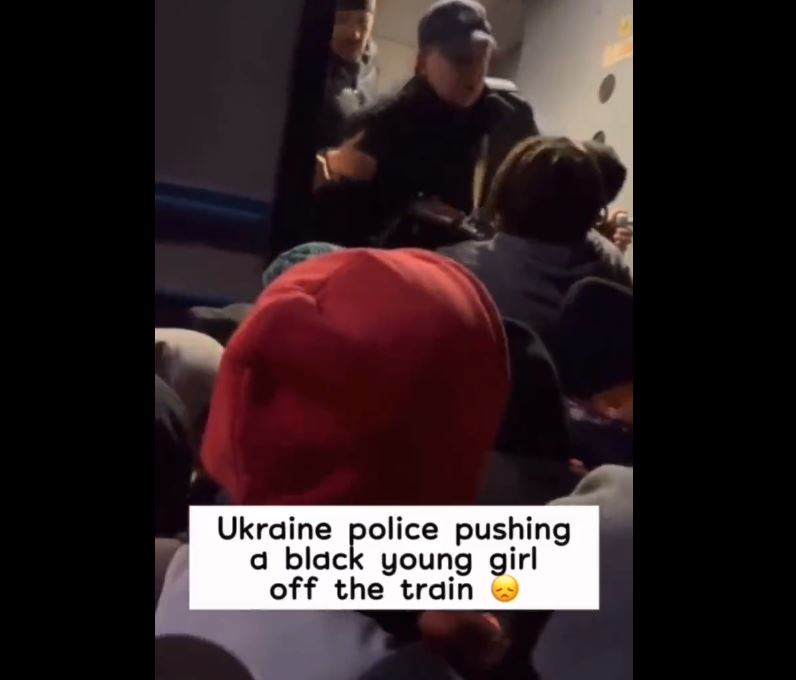 Nigeria, South Africa and other African governments are scrambling to help their citizens escape the conflict between Russia and Ukraine following reports of racist and unfair treatment of Africans at border crossings.

Africans in Ukraine, many of them students, are among hundreds of thousands of people trying to flee into Poland and other neighbours.

Nigeria on Monday urged border officials in Ukraine and elsewhere to treat its citizens equally.

“There have been unfortunate reports of Ukrainian police and security personnel refusing to allow Nigerians to board buses and trains heading towards the Ukraine-Poland border,” said presidential adviser Garba Shehu in a statement.

Shehu referenced a video on social media where a Nigerian mother with a young baby was filmed being physically forced to give up her seat.

He said there are also reports of Polish officials refusing Nigerian citizens entry into Poland from Ukraine.

“It is paramount that everyone is treated with dignity and without favour,” said Shehu.

“All who flee a conflict situation have the same right to safe passage under UN Convention and the colour of their passport or their skin should make no difference.”

A group of South Africans, mostly students, were stuck at the Ukrainian-Polish border, the country’s foreign ministry spokesperson, Clayson Monyela, said on Twitter.

The South African ambassador to Warsaw was at the site trying to get them through, according to Monyela who on Sunday had said Africans were being “treated badly” at the Polish-Ukraine border.

“Everybody receives equal treatment. I can assure you that I have reports that already some Nigerian nationals have crossed the border into Poland,” she told local media.

She said Nigerians could stay for 15 days. Even invalid documents were being accepted to cross the border and Covid-19 restrictions were lifted, she added.

Some Nigerians who made it across the borders described frightening journeys in the dark to reach traffic-packed frontiers where they were made to wait as officials gave priority to Ukrainian women and children.

Stephanie Agekameh, a medical student now in Poland, said officials at the Medyka border crossing were responding first to Ukrainians.

“One of the officers came and told us it’s harder for us foreigners because they have to get in touch with our government in different countries,” she said by text message.

Speaking from Korczowa in Poland, Nigerian managerial sciences student Agantem Moshe, said Ukrainian police had pushed Africans out of the way to make way for women and children.

“From the Polish side it was smooth, they were professionals. In Ukraine, they kept us outside in the cold,” he said.

The UN said that more than half a million refugees from Ukraine had so far crossed into neighbouring countries.

Nigeria’s embassy in Bucharest said it had received 130 Nigerians from Ukraine. Another 74 were accounted for in Budapest, where 200 more were expected on Monday, the foreign ministry said.

Another 52 had arrived in Warsaw with another 23 being processed.

“We assure Nigerians that all hands are on deck and arrangements are being put in place to effectively evacuate our citizens,” Nigerian official Gabriel Aduda said in a statement.

Ghana’s government said it would meet with parents of students stuck in Ukraine on Tuesday and sent embassy officials to border points to help.

Democratic Republic of Congo Foreign Minister Christophe Lutundula said on Twitter he would meet with the Polish ambassador to help with the passage across the border of about 200 Congolese, mostly students.

Ivory Coast, which according to state media has 500 nationals in Ukraine, said it was also making arrangements for their evacuation.

Kenya’s foreign affairs ministry said last week around 200 Kenyans were safe and accounted for but that some were stuck at the Polish border because of visa restrictions.

Nigerian accountant Lukmon Busari was relieved his son, a fourth-year medical student, was already out after waiting for a day on the Polish border.

“Initially they didn’t allow them to move as they gave priority to Ukrainians, to women and children. Eventually they allowed them into Poland,” Busari told AFP by telephone.

“According to him, the Polish authorities did a marvellous job. He left on Thursday and got to the border on Thursday night, and he got into Poland on Friday.”

His son was currently resting in Poland before coming home.

“We are seeing how we can clear a flight for him to come back to Nigeria.”