Vaccination, one of the most important medical discoveries in history, is the method of injecting a weakened form of an infection into the body to prevent getting the disease later in life. Our body meets the deactivated form of the virus or bacteria in the vaccination, builds up the immune system against it and is able to fight off the infection if it ever meets it again.

The first-ever vaccine was for smallpox, a deadly infection once feared across the Earth. It was introduced in 1798 by an English doctor called Edward Jenner. So what did the Turks have to do with this?

I first heard of Edward Jenner from my GCSE biology textbook – a name to memorise along with the other famous scientists who made discoveries. Many years later I came across this name again, but I learned of a few details that weren’t mentioned in my textbook. It seemed that when, in 1798, Edward Jenner first described the vaccine for smallpox, people in the Ottoman Empire had already been doing something similar for at least a hundred years.

Lady Mary Wortley Montagu, wife to the English Ambassador to Constantinople, had written letters in 1718 describing social meetings between the Ottoman women, who would bring their children together and by making a scratch on their arms, introduce pus from the smallpox wounds of an infected person. After this procedure, known at the time as ‘variolation’, the child would get a mild version of the disease and then become immune.

Lady Mary, who had already survived a disfiguring attack of smallpox, had her own children variolated in Constantinople and brought this miraculous procedure back home to England. Being an educated lady of high social standing she wrote about it to the Royal family, which prompted the Princess of Wales to have her children variolated.

So that’s the story of how this method of variolation, the intentional spreading of the smallpox virus to healthy people for immunity, spread to Europe. There is evidence to suggest that the Ottomans probably learned this from other civilisations in Africa and Asia, with knowledge of the smallpox virus travelling across the world during the eighteenth century.

Ironically, Edward Jenner himself was variolated against smallpox as a schoolboy in Gloucestershire.

The reason that he is credited with the development of the first vaccine is because of his pioneering technique. He realised that you didn’t need human smallpox to make somebody immune (the method used in the Ottoman Empire carried a risk of death), as it could be achieved by using a similar version of the disease suffered by cows.

‘Cowpox’, when injected into the skin of humans, had a much safer record. Jenner observed that milk-maids seldom caught smallpox – perhaps because they usually caught cowpox first. But it was more than just this that sets Jenner apart: he performed scientific studies and wrote research papers about his findings – something the Ottoman doctors failed to do.

A Greek doctor once told me, “We Greeks and Turks do ten things, but write down only one. We must be like the Germans: they do one thing and write it straight down!” He was referring to good documentation, something which struck a chord with me immediately. The work that Jenner did rightfully earned him his celebrated place in medical history, but how many of us knew about the people along the way that contributed to this discovery? 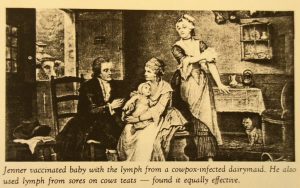 Would the Renaissance have been possible without the Arab scholars who preserved the ancient Greek texts? Hadn’t they developed the ideas for centuries before they were translated from Arabic to Latin and studied in Europe? Science and discovery does not happen overnight – it matures slowly over centuries.

The lesson from this piece of history is evident. History is determined by those who write it down. Inquisitive minds must look into every new detail tirelessly, record meticulously and publish with determination. This is the true innovation that has changed the fields of science and medicine in the last few centuries.

We can also take a glimpse into the life of the Ottomans in the 1700s, which mesmerised Orientalists like Lady Mary Wortley Montagu. We see that, even then, Constantinople had access to the latest medical techniques, a lead which is being developed once more in certain fields by Turkish doctors today.

Turkey Cracks the EU Wide Open
Erdogan: Turkey will not accept to be confined to Antalya shores