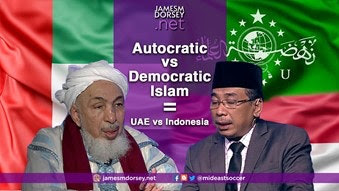 Indonesia has emerged as a primary battleground between democratic and autocratic visions of Islam in the 21st century.

Mr. Widodo risks finding himself in the battle’s crossfire. Although closely associated with Nahdlatul Ulama, Mr. Widodo has agreed to cooperate with the UAE on religious affairs in return for massive Emirati investment in the Southeast Asian archipelago nation.

At the heart of the battle between rival theologically packaged visions of governance is the relationship between Islamic clerics and the state.

Mr. Bin Bayyah favours a state-controlled clergy that stifles free-flowing debate by avoiding what the jurist terms the “chaos of the fatwa.” The jurist heads the Emirates Fatwa Council, established in 2018 “to take the fatwa out of the hands of terrorists and extremists.”

Hamdan Al Mazroui. the head of the Emirati General Authority of Islamic Affairs and Endowments at the time, said the Fatwa Council had been created to “ensure alignment of fatwas in the country and ensure preaching of moderate Islam.” Control of religious debate in the UAE mirrors the country’s crackdown on freedom of expression in general.

The Fatwa Council counts among its members, Professor Amany Burhanuddin, a prominent Islamic scholar, who heads the Indonesian Council of Scholars for Women and Youth.

In diametric contradiction to Mr. Bin Bayyah and the UAE, Nahdlatul Ulama, under the leadership of its newly elected chairman, Yahya Cholil Staquf, a proponent of Humanitarian Islam that propagates democracy, respect for human rights, and pluralism, has launched a frontal attack on the once-powerful Indonesian Ulema Council.

The Ulema Council is a remnant of erstwhile state control that many view as the country’s top body of Islamic scholars made up of representatives of all strands of Sunni Islam.

The assault is designed to marginalise the Council that seeks to retain that authority as a de facto independent group. By undermining the Council, Nahdlatul Ulama encourages the very “chaos of the fatwa” that Mr. Bin Bayyah and his UAE backers would prefer to repress.

Created in 1975 by then-President Suharto as a quasi-independent body, the Council has long projected itself as the authoritative voice of Islam. However, control of the Council was up for grabs after Mr. Suharto was toppled in 1998 by a popular revolt, even if successive Nahdlatul Ulama supreme guides have since chaired it.

The Council long propagated discriminatory policies against Muslim sects accused of being heretic such as Ahmadis and Shiites and gender minorities. It did so with the support of conservative clerics of Nahdlatul Ulama, including Mr. Jokowi’s vice-president, Ma’ruf Amin.

Mr. Amin played a key role as chairman of the Council in mass protests that in 2017 brought down Jakarta governor Basuki Tjahaja Purnama, aka Ahok, an ethnic Chinese Christian, and led to his sentencing to two years in prison on charges of blasphemy against Islam.

The Nahdlatul Ulama assault started with the group’s supreme leader Miftachul Akhyar last week resigning his post as chairman of the Ulema Council. The resignation, which has yet to be accepted by the Council, appears to have thrown it into disarray.

At the same time, the ministry of religious affairs has deprived the Council of its de facto monopoly on halal certification by opening the sector to competition.

Halal certificates are big business. The Halal Product Assistance Agency issues the certificates based on a fatwa issued by the Council to companies in the food, fashion, education, pharmaceuticals, cosmetics, tourism, media, travel, medical. health, art, culture, and finance sectors.

With the undermining of the Council, Nahdlatul Ulama is attempting to remove the last remnants of state influence on the issuance of fatwas.

It no doubt opens the door to what Mr. Bin Bayyah fears most. Echoed in statements by top UAE officials, Mr. Bin Bayyah blames instability and volatility in the Middle East on a cacophony of fatwas that fuel unfettered debate rather than provide uniform state-approved guidance to the faithful.

In Mr. Bin Bayyah’s mind, autocracy, uninhibited by religious jurists who do not know their proper place, is best positioned to ensure societal peace. Mr. Bin Bayyah remained silent when his Emirati paymasters rendered his theory obsolete with military interventions in Libya and Yemen. The interventions fuelled civil wars while political and financial support for anti-government protests in Egypt that overthrew the country’s first and only democratically elected president in 2013 produced a brutal dictatorship.

More than 800 protesters against the coup were killed in its immediate aftermath. The UAE’s intervention in Yemen in cooperation with Saudi Arabia sparked one of the world’s worst humanitarian crises, while UAE support for Libyan rebel leader Khalifa Haftar in contravention of a United Nations arms embargo helped push the North African nation into protracted violent conflict.

Mr. Bin Bayyah’s silence on chaos fuelled by Emirati autocrats suggests that he “is not opposed to ‘chaos’ unconditionally, but rather he only refers to as ‘chaos’ efforts to oppose autocracy on the part of democratically-oriented forces in the region,” said Usaama al-Azami, a British Middle East scholar of South Asian descent who also trained as a classical Islamic scholar.

Mr. Bin Bayyah’s silence was grounded in his belief that jurists should not impinge on the decisions of a ruler because he does “not know the facts of the matter or the consequences of particular courses of actions.” Moreover, Mr. Bin Bayyah argues that Islamic scholars may not be aware of a country’s “internal tensions or external concerns that may lead to civil war which need to be taken into account in matters of state.” By contrast, the ruler understands the underlying reasons for his decisions and delays with situations that are hard for others to understand,” Mr. Bin Bayyah said.

Rather than subjugating Islamic scholars to state control, Mr. Staquf, the newly elected Nahdlatul Ulama chairman, has pledged to take the group out of politics. The assault on the Indonesian Ulema Council may be the first step in that direction. Still, the litmus test will be the future of the numerous Nahdlatul Ulama activists that serve in Mr. Widodo’s Cabinet and as ambassadors and board members of state-owned enterprises.

“While the new chairman has publicly pledged to return NU to being a politically neutral organisation, signs suggest it may well retain its close ties with the Jokowi regime, working with the government to promote the brand of ‘moderate Islam’ Jokowi endorses at home and abroad,” said Indonesia scholar Alexander R. Arifianto.

Nahdlatul Ulama could conclude that preventing Mr. Jokowi, tempted by UAE financial largesse, from buying into the Gulf state’s autocratic notion of ‘moderate’ Islam is a good reason to maintain the group’s close ties to the president.

UAE Crown Prince Mohammed bin Zayed has pledged to lead a committee that will oversee the construction of a new Us$32.5 billion capital city for Indonesia and invest $10 billion in the country’s sovereign wealth fund with a focus on infrastructure.