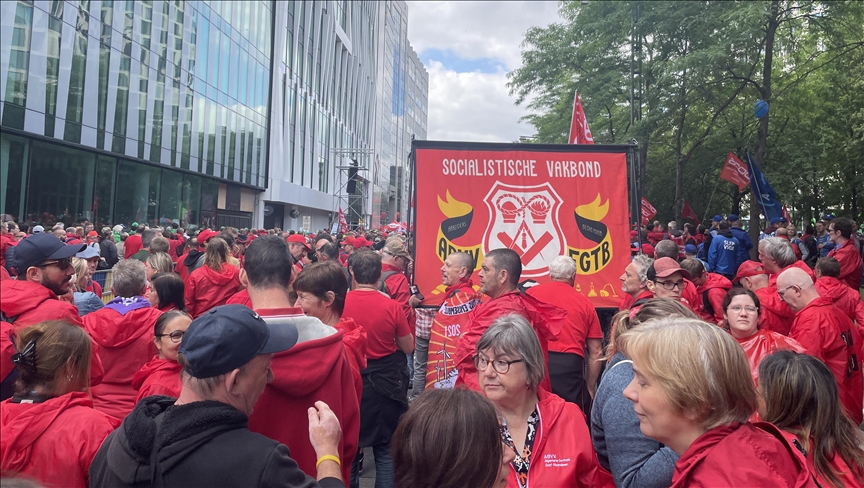 Around 80,000 people marched through the Belgian capital Brussels on Monday to protest the high cost of living and the lack of a sufficient increase in wages.

At the urging of the largest labor unions in the country, the protesters met in front of the Brussels North railway station.

A giant screen set up in front of the station displayed the words “Life is too expensive, we want higher wages.”

Carrying the red, green and blue pennants of their union and wearing clothes in the same colors, the protesters walked up to the Brussels-South railway station a few miles away using the main roads.

They chanted anti-government slogans throughout the march.

Traffic was disrupted in the central areas of the city due to the protest.

Extensive security measures were put in place around the protesters.

Reaction to cost of living

The demonstrators called for improved working conditions and wages, noting that the cost of living has recently reduced the purchasing power of employees.

With the indexing system in practice in Belgium, employees’ wages are being increased as much as the rate of increase in inflation.

Employers, however, are uncomfortable with automatic wage indexing and want it canceled.

But the trade unions demand that the indexation system be maintained and that the laws limiting wage growth rates in the private sector be changed.

Inflation in the country reached its highest level since 1982 at 8.97% during May.

Sweden’s state TV interviews terror leader amid membership bid to NATO
Erdogan: “Our country has been home to the highest number of refugees for the past 7 years”