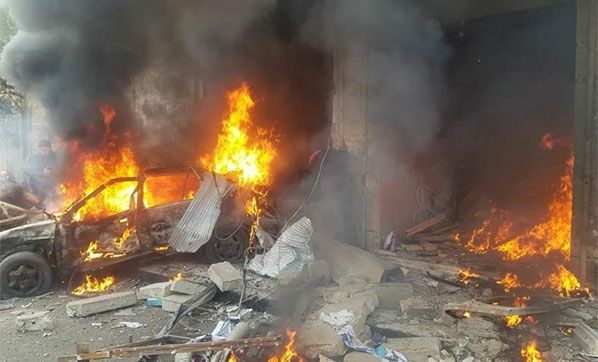 The United States-backed YPG terror group targeted civilians in 3 separate attacks in 2 days murdering 15 and leaving more than 50 people injured in Syria over the weekend. Experts say appointment of Brett McGurk would further terrorize the peaceful regions under Turkish control by reinstating Washington’s support which was cut off by Trump administration.

YPG first attacked Kurdish civilians in Afrin city on Saturday with a bomb-laden car. The explosion took place at a busy bus stop in the industrial section of the city where hundreds of hard working locals frequent. 5 people died and 22 have been injured during the attack. Turkish Defense Ministry released a statement saying that YPG/PKK terror group once more targeted innocent civilians.

The YPG terror targeted densely populated civilian areas following day in Azaz and Al Bab. Azaz has been a peaceful city since it fell under Turkish control as it has been away from frontlines in Syrian quagmire. The VIBED attack in Azaz took place in the heart of the city near the government headquarters. 4 people were murdered and more than 20 wounded in Azaz bombing. Just moments later, another attack took place near Al Bab city at a checkpoint. Explosion murdered 6 people and injured 5. Turkish authorities have yet to announce who is responsible for the double attack on Sunday but YPG is the only terror group with sources to infiltrate in areas, according to the experts.

WARNING GRAPHIC FOOTAGE: This is not a movie – this is the act of savage terrorist who have no regard for the sanctity of human life. The sole purpose of these attacks is to terrorize the local population and make them feel unsafe in opposition controlled areas. pic.twitter.com/sCGeam7vby

“This is the act of savage, terrorist who have no regard for the sanctity of human life. The sole purpose of these attacks is to terrorize the local population and make them feel unsafe in opposition controlled areas,” said Turkey-based Syrian journalist Obaida Hitto who has been following the Syrian civil war. Hitto pointed out that in some cases, locals unknowingly deliver bomb-laden cars of the terror group. “They (terror group) set someone up who has no idea they are delivering a bomb concealed in a shipment of goods. In some cases, bombs go off while the delivery vehicle still moving,” Hitto reiterated.

Territories under Turkish control in Syria have enjoyed relative security and peace as ISIS have mostly been evaporated and the Trump administration ended previous Washing policy of unconditional support for the terrorist YPG. However, since Brett McGurk, a staunch supporter of terrorist YPG, has been appointed as the National Security Council’s Middle East and North Africa coordinator for the Biden administration, YPG has regained sources to infiltrate into peaceful areas to terrorize local civilians. McGurk was formerly the special presidential envoy to the U.S.-led multinational military coalition against the Islamic State (ISIS) group. McGurk resigned in December 2018 in protest when President Donald Trump announced he was going to withdraw all U.S. troops from Syria.