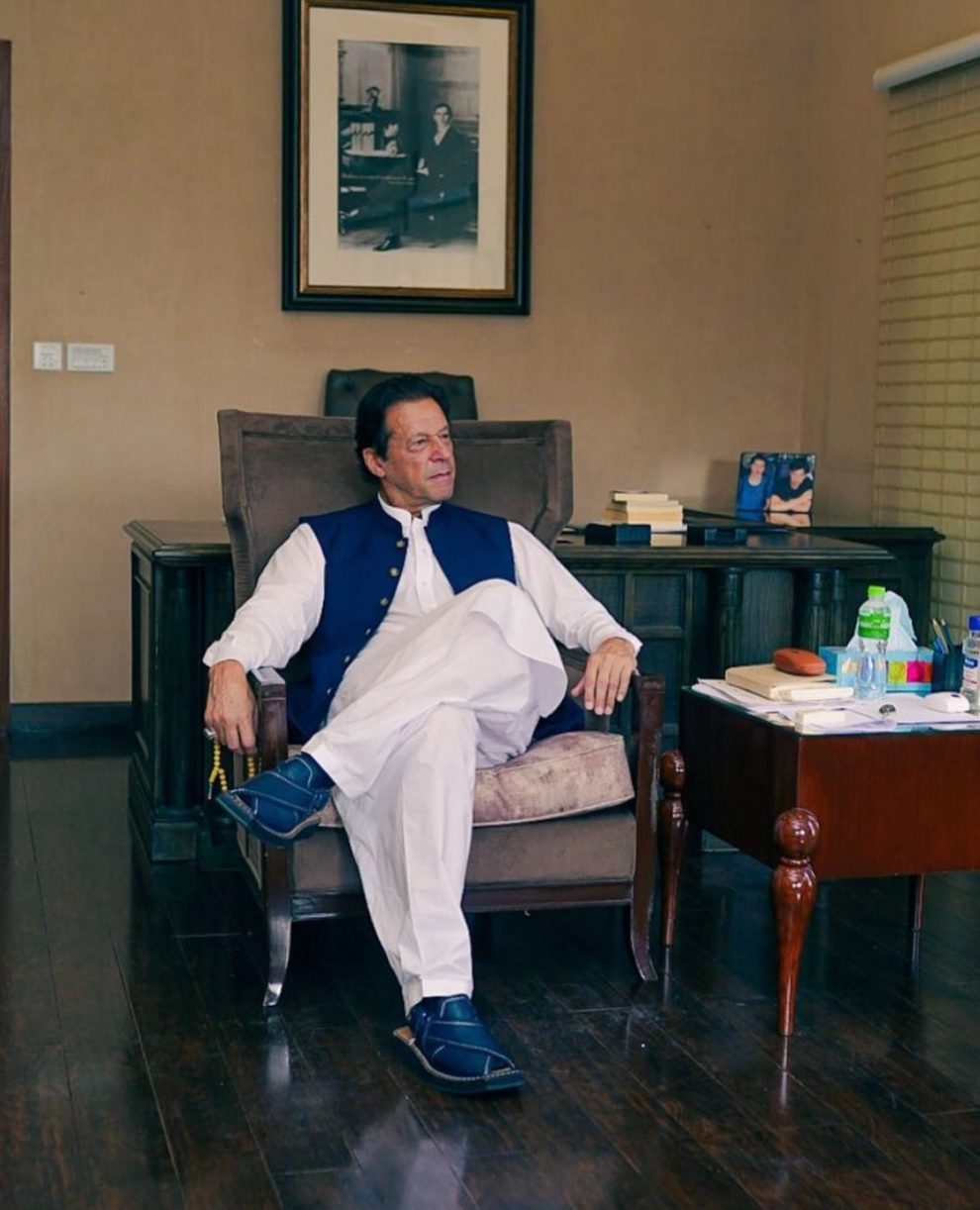 ISTANBUL – Pakistan is undergoing historic moments after the government of Prime Minister Imran Khan was ousted.  The Pakistan Tehreek-e-Insaf (Movement of Justice), or the PTI, alleges a US regime change operation.

With the powerful Pakistan military apparently behind cobbling together various opposition parties, which have been at the neck of each other until recently, Khan’s ouster has triggered an unprecedented public mobilization in the country with calls for reforms and an immediate general election.

Khan has claimed the US did not like his “independent foreign policy” and used pawns inside Pakistan to oust the government he formed in 2018.

Despite facing a fierce opposition, whose leaders have significant cases of ongoing corruption, and a coordinated media campaign against him, Khan’s government, all indicators suggest, was performing well over his predecessor regimes.

Notably, the economy has been better at least in the past 17 years. Exports were all-time high while Khan was implementing progressive welfare schemes, including government-funded health cards, scholarship schemes for the young, subsidized housing scheme for people from modest backgrounds and free housing and meals for labor class who worked in metropolitan cities.

More than three months after Khan exited Prime Minister’s Office with a single hand diary, Straturka spoke to the globally acclaimed professor of Decolonial Thought and Social Theory, Salman Sayyid, to understand where Pakistan, home to over 220 million people, is headed.

Professor Sayyid is the Head of the School of Sociology and Social Policy at the UK-based University of Leeds and a Professor of Decolonial Thought and Social Theory. His new book, The Promise of Pakistan, will be coming out soon.  In this conversation, he discusses decolonization, Pakistan, and the possibility of the Riyasat-e-Medina.

The interview is being published verbatim.

The current crisis in Pakistan presents a historic opportunity for the country’s people to bring about meaningful change and end decades of misrule. The overthrow of the Imran Khan government and unprecedented popular mobilizations across the country against his removal have created new political opportunities, which if grasped can achieve the Pakistan that was hoped for in 1947.  The forces arrayed against PTI include not only all the major parties who have been exposed as being guided by dynastic interests with no commitment to democratic governance. It also includes the establishment who believe that Pakistan cannot be a sovereign country guided by the principles of its foundation. It also includes Westoxicated sections of civil society, who believe themselves to be liberal and progressive but will allow their Islamophobia to prevent any meaningful emancipatory reforms.

The popular mobilization throughout the country is unprecedented not just in terms of the numbers or their geographic spread, but also their composition. The decision to remove Imran Khan’s government is being criticized by people who rarely take a public stance against the establishment e.g. ex-senior military and civil service officers.

The situation has emerged where there is a clear dividing line between the corrupt order (chors and their enablers in the sections of the state apparatus and civil society) and the people of Pakistan committed to the proposition that they are not beggars without choice.

It’s not very often that any people get a chance to rewrite their history. This is the moment when the people of Pakistan could rewrite a better future for themselves and their children.

Popular and accountable rule in Muslim countries is impossible if the Islamophobia of the very vocal group of Westoxicated, self-declared liberals, and technocrats of state apparatus remains. These factions will oppose any kind of opening to Muslimness to safeguard their colonial mentalities.

The Westoxicated liberals, many of them on the left, have always stood on the side of authoritarianism, military rule, (and) other forms of dictatorship, because they realize that real popular rule would have to go through the route of Muslimness.

The people who cheered on General El Sisi of Egypt, against democratically elected President Mohammad Morsi, were the Westoxicated. Their Islamophobia cannot contemplate a future in which expressions of Muslimness provide a platform for serious public discourse.  Their love of democracy does not extend beyond its associations with Western liberalism and imagined Western life-styles.

For much of Pakistan’s history those who believe in it have not been able to rule it, and those who ruled it, have never really believed in it. This has meant that most of Pakistanis have been effectively dis-franchised, by dynastic groups pretending to be political parties, by technocrats unable to see beyond colonial lens, and the Westoxicated who have distaste for the very idea of Pakistan.

Pakistan and Problem of Westoxicated elite

This powerful diaspora, which is overwhelmingly supportive of Imran Khan, interrupts the Westoxicated cheer-leaders of Islamophobia and makes it difficult for them to win international civil society support for the imported regime.

Need for a renewed understanding of military

For example, when such critics dismiss the Pakistani armed forces as a military Inc, they seem to ignore the key role that industrial-military complex plays in the US economy.

These discussions do not help understand the role of the military in Pakistan nor develop robust and just policies for its future.

We need fresh thinking about what the Pakistan military is and what is should be, we cannot simply try and squeeze it into the template of Eurocentric readings of Western history.

One way of thinking about the military is that it was de facto only national political ‘party’ in Pakistan.

If you compare it to dynastic parties which populate most of the Pakistan’s political landscape, you can see it is more meritocratic, more transparent, more accountable, and more of a value-based organization than most of Pakistan’s parties. This does not mean the military does not have problems or could not be better, but the fact that to this date no COAS (Chief of Army Staff) has been able to hand over power to family members provides a sharp contrast with the venality of most of Pakistan’s political establishment.

It is imperative that the institutional integrity of the military is not compromised through corruption and epistemological Westoxication. The danger for the defense establishment is elite capture by Islamophobic forces hostile to the project of Pakistan.

The professionalization of the military should not be at expense of its commitments to the Pakistan project. A military without an ideology or values will succumb to transactional logics and Eurocentric realpolitik. If this happens the military becomes prison guards jailing its people rather than guardians of sovereignty and freedom.

The weakness of Pakistan has contributed to the increased Islamophobia in Kashmir, and in India. It has increased the likelihood of India becoming even more aggressive over the Indus Valley waters, the treatment of the Kashmiris.

It is important to recognize that values are a source of national power. A country that stands for something, that has a vision and abides by its values will be better placed to deal with risks and hazards.

The inability of Pakistanis to speak out on behalf of the treatment of the Rohingya or the Uyghurs not only weakens the country’s position regarding Kashmir, it undermines its long-term freedom. It advertises the fact this is a country which has no principles, and its elite can be bought and sold without any difficulty. The recent attempts to abandon the Palestinians should be seen in this light, as an attempt to isolate Pakistan and make it more vulnerable to hostile pressure.

It is a movement for transformation

The popular mobilizations against the imported and imposed regime of the PDM is transforming the PTI into a nation-wide political force. These mobilizations have reduced the Pakistan People’s Party (PPP), Pakistan Muslim League (Nawaz) to mere localized petty transactional factions, unable to command respect let alone rule seriously.

In Pakistan’s history, there have been two forces with nationwide reach: Qaid-e-Azam, and the army. There is now a possibility of a third nationwide force that can represent all Pakistanis: the PTI.

There is a potential for a nationwide political force, that is based on its values, not venality.  That is committed to a reforming the country rather than just holding office.

The failings of Pakistan is not due to its people, or the idea of Pakistan itself. It is a failure of its political elite, and its inability and unwillingness to institutionalize a country which is strong enough to protect Muslimness inside Pakistan, inside South Asia and neighboring countries. That is its failure.

Ultimately, it’s a failure of values and principles. Policies without principles will always be reactive, not strategic, they will not change the landscape or help bring about major reforms.

When Shahbaz Sharif says, “beggars can’t be choosers,” the question asked should be, who has made this country of 220 million into a nation of beggars? Who looted its foreign exchange reserves? Who has done this?

The same people who sneered at East Pakistan for being backward should explain how is that Bangladesh has a higher GDP per capita than Pakistan now. South Korea had some GDP per capita as Pakistan in 1950!

Imran Khan and the Riyasat-e-Medina

The idea of a Riyasat-e-Medina is about a welfare state in which common people are valued, protected, and empowered. However, you can’t have an Islamic welfare state without major tax reforms that make taxes progressive and universal.

(For example, the welfare states of Nordic Europe, regularly collect nearly half their GDP in taxes).

Without increasing the resources available to the Pakistani federation, it will not be possible to implement Riyasat-e-Medina in the current conjuncture.

What is needed as Pakistan approaches 75 years is a new social contract.

Let's celebrate the victory of justice in #Punjab of #Pakistan once again by listening to our song, "Absolutely Not"!… #AbsolutelyNot

Pakistan’s sovereignty is restrained by the continuation of colonial mentalities and institutions.

For example, the legal system in Pakistan is still dominated by the 1930s legislation inherited from the British Raj. The army is still dominated by regiments whose histories glorify Western colonial wars. Pakistan’s electoral system is another British inheritance and produces some of the most unrepresentative national legislatures in the world.

Principles and values are necessary to guide policies and protect you from predatory actions so you can deliver Riyasat-e-Medina.

Achieving Pakistan is a serious task and requires courage and imagination: theory and practice, heart, and mind.

At this moment in Pakistan’s history there is a great opportunity to harness the will of the people revealed by their refusal to accept the rule of chors.

The people of Pakistan are rising not just to bring back the PTI but to build a new republic and make a better country. There is a real chance to achieve Pakistan and keep the promise made in 1947.