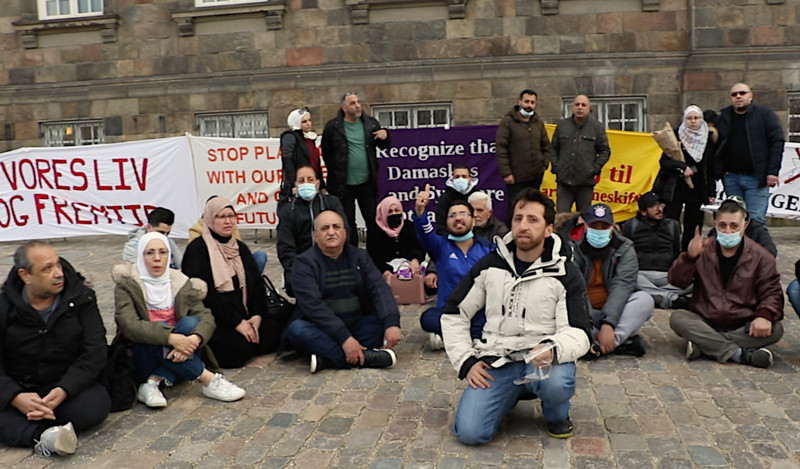 “I would rather take my own life here in Denmark than go back to Syria!”.

This was what I heard from Syrian refugees in Denmark in response to the Danish government’s decision to strip them of their residency permits, claiming it is now safe for them to return to Syria.

The decision will also separate parents from their children and tear families apart, because the new policy will exempt men aged 18 to 42, who would be due to complete Syria’s compulsory military service.

As the Danish government knows, Syria’s constitution says that these men will be conscripted into the Syrian military or punished for evading enlistment.

Most of the refugees believed they were protected by Denmark’s immigration policy, but the government has since denied this, declaring it had always been clear that the protection it gave to refugees was only temporary.

Most refugees also did not understand the paperwork they filled out when they got into the EU country, as documented by Human Rights Watch, an international NGO.

There were translators on site to help, but many people did not know what they were signing at the time.

Some said the most important factors in their cases were never written down in their original interviews.

And so, Denmark’s 35,000 Syrian refugees find themselves in a frightening limbo.

Syrian pupils and students in Danish schools are struggling to study while uncertain of their fate.

Others are having their lives shattered for a second time.

Omar Al Nator and his wife Asmaa fled Syria in 2011 and now own a successful grocery store in Ringsted, in the Danish region of Zealand.

They spent seven years learning Danish, local people love shopping with them, and they are part of the community.

When Omar Al Nator heard their residency permit was revoked, he was so shocked he had a health crisis and had to close the store.

To add to the stress, they are to be separated from their two sons, who are protected under the Syria military-conscription clause.

The Al Nators appealed, but the Danish authorities rejected their case.

They have since been told they have only 30 days to return to Syria or face being detained in a deportation camp.

They come from Daraa, in southern Syria, and the regime killed several of their family members in a 2011 uprising there.

“After waiting 18 days, the court’s decision is for us to leave Denmark. We have 30 days before we must go back to Syria, where we escaped the murderer Bashar Al-Assad and his crimes of killing and detaining the Syrian people,” Asmaa Al Nator said.

Some other cases are even more disturbing.

Delsha, a young mother, fled Syria with her three children, her mother, and her brothers, when they faced military conscription.

They are stateless or unregistered Kurds, known as Maktoumin, originally from from Al Malikiyah in northern Syria.

They have no home to go back to because it was destroyed in the war and they risk imprisonment.

Delsha’s ex-husband, who remained in Syria, has also threatened to kill them.

He even made a video with a gun and a knife, shouting about it, and thanking the Danish government for sending them back.

But despite the clear peril, Danish judges have also said that Delsha, her three children, and her mother must leave.

Many refugees fled the regime’s brutal secret police, which still terrorises the country.

There were very real risks of arrest, persecution, and torture by Syrian security services for some deportees, according to Ammar Hamou, the head of Syria Direct, a news organisation based in Amman.

Hamou took part in consultations with the Danish immigration services, who, he said, relied all too willingly on input from a Syrian general in charge of immigration.

For their part, Syrian refugees have been protesting in front of the Danish parliament in Copenhagen for a month, demanding a change to policy.

They come from different ethnic groups who were often hostile to each other in Syria, but who have learned to trust each other while living together in Denmark.

The Syrian regime deliberately cultivated hostilities between Syria’s diverse religious, sectarian, and ethnic groups for decades in order to divide and rule.

That is how the dynasty of former Syrian president Hafez al-Assad and now his son Bashar al-Assad has held power for 50 years.

For many, the time in Denmark helped heal painful divisions.

And losing their hard-won freedom by being deported to Syria’s ruins would be devastating.

Denmark is one of the EU’s wealthiest countries and has a relatively small Syrian community.

But for Haifaa Awad, a Syrian-Danish doctor and activist, who recently spoke at a Danish demonstration in support of Syrian refugees, the centre-left government of Danish prime minister Mette Frederiksen has a right-wing agenda on migrants.

“Our Social Democratic leaders want to show those voters who voted them in on a far-right platform that they will take a very hard line on refugees,” Awad said.

It remains to be seen if the UN or human rights organisations make Denmark think twice before going ahead.

Denmark is a signatory to the 1951 Refugee Convention, which gives it solemn responsibilities for people’s care.

And Denmark’s Syrian-refugee decision is a test of Frederiksen’s respect for human rights and rule of law.