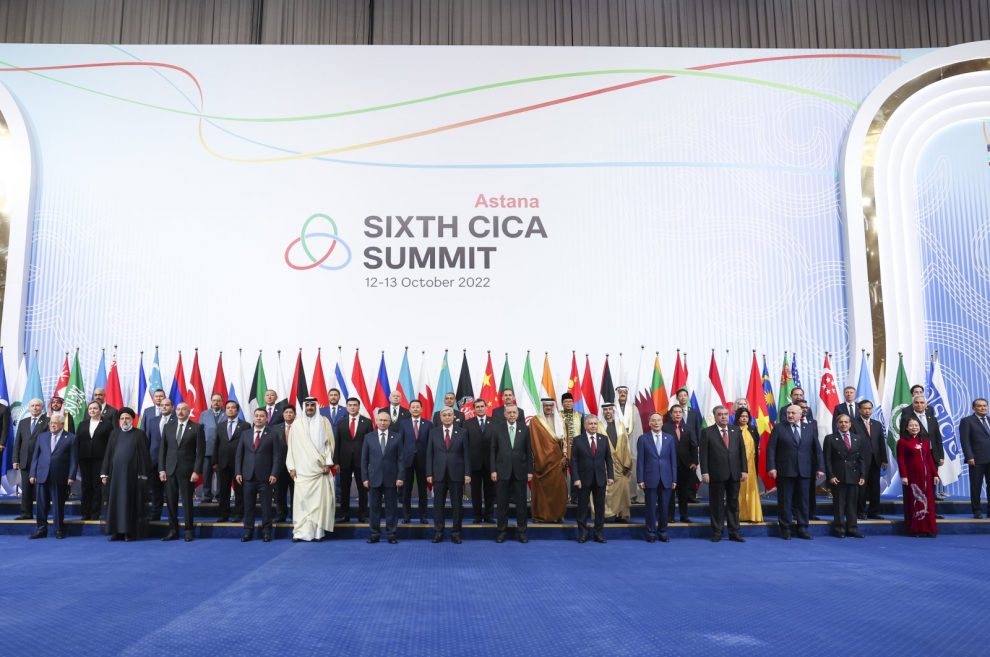 President Recep Tayyip Erdoğan spent two days in Astana, Kazakhstan earlier this week to attend the 6th Conference on Interaction and Confidence Building Measures in Asia and the Türkiye-Kazakhstan High-Level Strategic Cooperation meeting. On the occasion of that visit, Ankara and Astana concluded 20 agreements that will take their relations to the next level.

Obviously, the world paid close attention to Erdoğan’s visit due to his meeting with Russian President Vladimir Putin. For the record, that level of interest was not unprecedented. The world has been watching Erdoğan’s diplomatic traffic and contacts with his Russian counterpart quite closely since Moscow’s invasion of Ukraine. After all, the Turkish leader has pursued an exceptional policy of balancing and active neutrality as the only head of state that speaks simultaneously with Ukrainian President Volodymyr Zelenskyy and Putin. In this sense, Erdoğan has been trying to kick off diplomatic talks to end the war. It is a welcome development that Saudi Arabia and the United Arab Emirates (UAE) followed in Türkiye’s footsteps to try and open a dialogue channel between the West and Russia. It is an indisputable fact, however, that the Biden administration was unhappy with the OPEC+ decision to reduce oil production.

Erdoğan’s post-2015 leader-to-leader diplomacy with Putin represents a distinct experience. The frequent contacts between the two presidents over the course of the Ukraine war and what those conversations have achieved, too, bear extraordinary importance for the academic literature on diplomacy. It goes without saying that each of the two leaders’ previous meetings (in Tehran, Sochi and Samarkand) yielded certain results. Those efforts made possible meetings between the Russian and Ukrainian delegations in Antalya and Istanbul, followed by the grain deal, additional security measures for the Zaporizhzhya nuclear plant and the prisoner exchange.

Furthermore, the Russian president recently sent a clear message to European leaders, suggesting that the delivery of natural gas via the Nordstream pipeline could be redirected to the Black Sea and adding that Türkiye could be transformed into a major hub for natural gas. Ahead of his face-to-face meeting with the Turkish leader in Astana, Putin told reporters once again that Türkiye had become the safest route for the European Union. That proposal, which followed acts of sabotage targeting the Nordstream 1 and Nordstream 2 pipelines, means a lot for Türkiye’s ambitions for producing energy and becoming a secure hub for deliveries. Accordingly, Putin reminded European leaders of Türkiye’s geopolitical significance and Erdoğan’s diplomatic skill. In light of the most recent developments, Ankara is likely to consider the Russian offer from an integrated perspective by taking into account its interests in Europe, the Eastern Mediterranean, the Black Sea, the Caucasus, Central Asia and the Gulf. Meanwhile, the Kremlin’s announcement that Putin could meet U.S. President Joe Biden at the G-20 Summit if they were to receive such an offer highlighted anew the diplomatic option and Türkiye’s potential role as a mediator.

The Kremlin seems to believe that it has largely taken from Ukraine what it hoped to get in light of the annexation of four Ukrainian regions. It carries out a heavy bombardment to force Kyiv to accept that outcome in addition to stating that it is ready to launch diplomatic talks. It makes perfect sense for Putin to want to meet the U.S. president, too. After all, there are two agreements that need to be in place for the current war to end: An agreement between Russia and Ukraine as well as the grand bargain between Russia and the West. The Kremlin resorts to the threat of using nuclear weapons in an attempt to force Ukraine and the West to agree to peace under the new conditions. The United States, by contrast, does not want the war of attrition to stop just yet. Undoubtedly, Ukraine giving up will be out of the question as long as Zelenskyy keeps winning on the battlefield in a conventional sense. In this regard, the real power struggle here occurs between the West and Russia.

The West won’t agree to a grand bargain with Russia unless and until the Europeans know how they will spend the winter and their leaders make up their minds about the lessons learned.

Indeed, Biden turned down the Kremlin’s offer to meet in Bali in November.

As the only NATO leader meeting with the Russian president, Erdoğan pursues a policy that enables him to contribute to the reconciliation processes between Ukraine and Russia as well as Russia and the West. Furthermore, Türkiye-Russia relations, which featured competition and cooperation in Syria, Libya and Karabakh, reached a new stage as a result of the Ukraine war. Accordingly, Moscow needs to work more closely with Ankara in the Eastern Mediterranean, Africa and Central Asia. That is the context, where one ought to situate the possibility of direct flights between Russia and the Turkish Republic of Northern Cyprus (TRNC). In light of the most recent developments, Washington and Brussels are compelled to devise a new policy toward Türkiye that will enable them to repair their relations with Ankara.