By Stijn Mitzer and Joost Oliemans

Bin atlı akınlarda çocuklar gibi şendik – A thousand cavaliers, we were cheerful like children during the raids (Akıncılar, by Yahya Kemal Beyatlı)
The A-10 Thunderbolt II was specifically developed as a close air support (CAS) aircraft, tearing up enemy tanks and providing air support against enemy ground forces with its powerful 30mm cannon. Largely designed around the GAU-8 Avenger rotary cannon, the mere presence of an A-10 over the battlefield is often enough to strike a lasting sense of fear into any foe on the ground. At a first glance, the Bayraktar Akıncı features little of the aspects that made the A-10 such a fearsome anti-tank hunter, even lacking any type of cannon armament whatsoever.
But war has changed. No longer do aircraft sweep in for low-level attack runs using cannons and unguided rockets as their primary means of armament all the while exposing themselves to a wide range of enemy anti-aircraft systems. Nowadays aircraft mostly rely on precision-guided muntions to take out enemy ground targets, often flying well above the ceiling of enemy air defence systems. Even aircraft like the A-10 ultimately had to adapt to this switch in tactics, employing JDAMs and the Paveway series of PGMs. Survivability made way for remaining undetected (either through stealth, or distance), wheras developments in modern munitions have meant that the raw amount of weaponry carried now outweighs aerodynamics and speed.
Employing the cheap but highly-accurate MAM-L munition, Azerbaijani TB2s neutralised at least 92 Armenian T-72 tanks during the Nagorno-Karabakh War. [1] Their success has led some to argue that the demise of the tank is finally here, with bulky armour providing little protection against top-attacks from munitions like the MAM-L. But rather than heralding the end of the tank as a fire-support platform, the Nagorno-Karabakh War actually proved the feasibility of using drones in high-intensity conflicts. It can be said that the TB2 functioned exceptionally well under these circumstances, destroying at least 548 Armenian targets at the confirmed loss of just two drones. [1]
The number of destroyed tanks increases even further when also including the examples neutralised in Libya and Syria in 2019 and 2020, where TB2s became responsible for the confirmed destruction of at least 30 more tanks. A list of tanks visually confirmed to have been destroyed by Bayraktar TB2s over Nagorno-Karabakh, Syria and Libya can be viewed below.

With the introduction of the first Bayraktar Akıncı into operational service in August 2021, the anti-tank capabilities of Baykar’s UAV lineage only appears to be increasing. Indeed, up to 18 MAM-Ls (or MAM-Cs depending on the mission requirement) can be brought to bear by the Akıncı compared to four on the TB2. This positions the Akıncı as the perfect system to annihilate entire armoured columns in just one sortie or to support ground offensives by picking off enemy targets ahead of advancing forces.
The ROKETSAN MAM-L has been specifically developed for use by UAVs and light attack aircraft. The MAM series of munitions can engage both stationary and moving targets with high precision, as witnessed during the several conflicts it has meanwhile seen action in. The recent introduction of INS/GPS to the MAM-L has dramatically increased the range of the munition from 7km to upwards of 14km, allowing it to outrange most mobile (Russian) air defence systems currently in service worldwide. 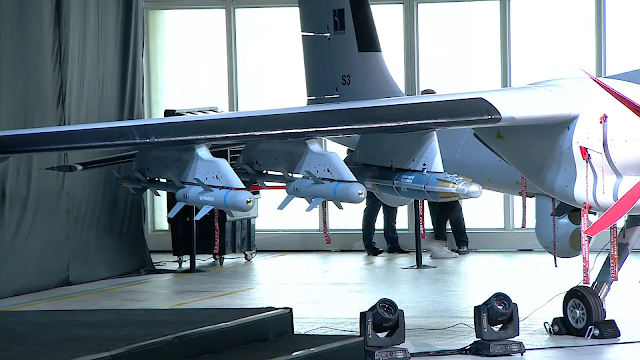 Bayraktar Akıncı brings a host of novel capabilities to the field of unmanned aerial warfare, and for their novelty, a focus on just these capabilities is perhaps justified. However, the mere fact of its increased payload capacity is perhaps just as important. Though the carriage of 18 MAM-Ls is unlikely to occur during wartime, it showcases the impressive payload capabilities of the Akıncı and its potential as one of the most dreaded flying tank destroyers of our times. New munitions are being developed alongside the Akıncı at an impressive pace, ensuring drone technology is always one step ahead of enemy countermeasures. The future of unmanned aerial warfare has finally arrived, and the Akıncı could well be at the forefront of that future.