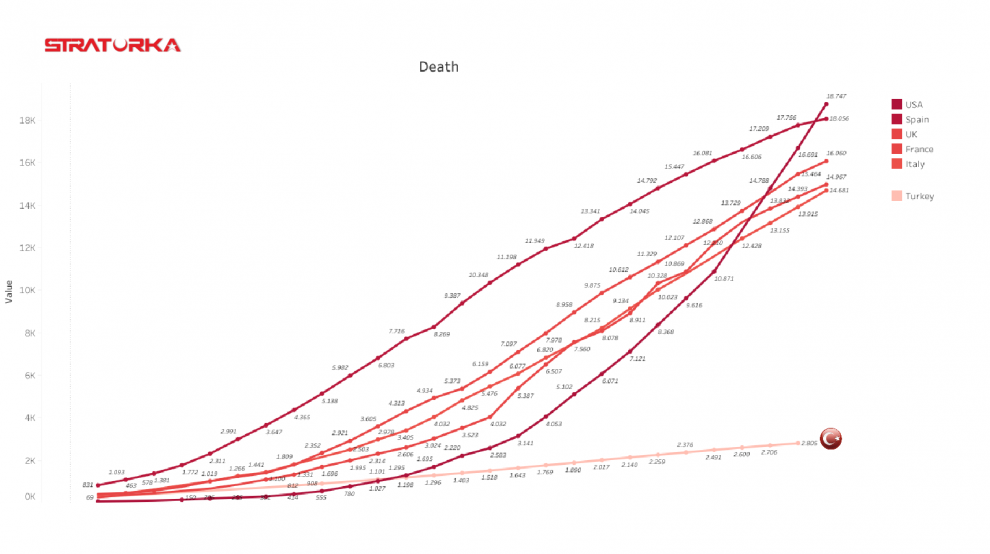 It is magic within magic that doctors can produce scientific articles about medical treatments and even about surgeries while actually performing it. There is a flow of such documents on the antiviral treatment of COVID-19 cases all over the world. One such article reviewed the success rates of drugs used in Turkey such as chloroquine, hydroxychloroquine, lopinavir/ritonavir, favipiravir and remdesivir. Managing to be the first country where the number of recovering people surpassed the number of new cases, we have to understand Turkey’s approach in the fight against the virus.

Turkey had its share of coronavirus infections: It ranked seventh worldwide with more than 100,000 total confirmed cases. If you consider the increasing number of tests, while the number of new infections is decreasing, you are witnessing a local miracle.

Turkey is simply doing what the World Health Organization (WHO) calls “contact tracing.” Accordingly, if a person has symptoms, he is supposed to go to a medical facility and start the treatment procedure. Meanwhile, the health authorities immediately start to trace all his recent contacts and get them tested. Those who test positive are taken to a medical facility and treated with hydroxychloroquine and azithromycin. Favipravir is also used for intensive care patients who have severe pneumonia.

For the last three months, the medical board at the Ministry of Health has had total authority over all other ministerial activities. Health Minister Fahrettin Koca, medical doctor in pediatrics and former chairman of the board of trustees at a medical university, orchestrated this work with a meticulous diligence from day one. Turkey had the highest intensive care unit (ICU) bed capacity per 100,000 people compared with most European countries, China and the U.S. in the beginning of the virus outbreak and added more ICU beds since then. The country also quickly became self-sufficient in manufacturing its own testing kits and ventilators. To date, Turkey has provided tons of medical aid to at least 60 countries, including testing kits, masks, medical protective clothing, etc.

Yet we have an awful putrid smell coming from abroad, a foul decay in academic reporting, that has been in play against Turkey. Case in point, the negativity from Soner Çağaptay, who has penned two hostile books about Turkey and President Recep Tayyip Erdoğan in the last two years, and his new cohort Deniz Yüksel. Writing for the Center for European Policy Analysis (CEPA), another tabloid rag created by the war-mongering Victoria Nuland and her NeoCon husband Robert Kagan, Çağaptay-Yüksel claimed that:

“…(Erdoğan’s) handling of the pandemic showed him failing at the wheel—and revealed competition among his advisors. In contrast, opposition politicians such as the recently elected mayors of İstanbul (Ekrem İmamoğlu) and Ankara (Mansur Yavaş) have emerged as problem-solvers. They and their counterparts in other large cities run by the opposition Republican People’s Party (CHP), such as İzmir and Eskişehir, have spearheaded social efforts to battle the pandemic, launching fundraising campaigns, encouraging citizens to wear masks in public…”

It shouldn’t be that difficult to put together so many unfounded claims in one paragraph for a person who managed to write two such books in such a short time. If you claim to be writing a scientific article, however, you need to base your thesis on solid evidence. What competition among advisors? In a country where a presidential system has recently been adopted, why should municipalities be implementing their own policies to solve a national problem?

A first-year university student would be sent to the writing center to see an advisor for such a prose. Yet, this passes as a testimony about the coronavirus fight of a successful country that donates ventilator parts to the country where this article was published.

You may treat a deadly virus, but there is no cure for neo-conservative Orientalism.