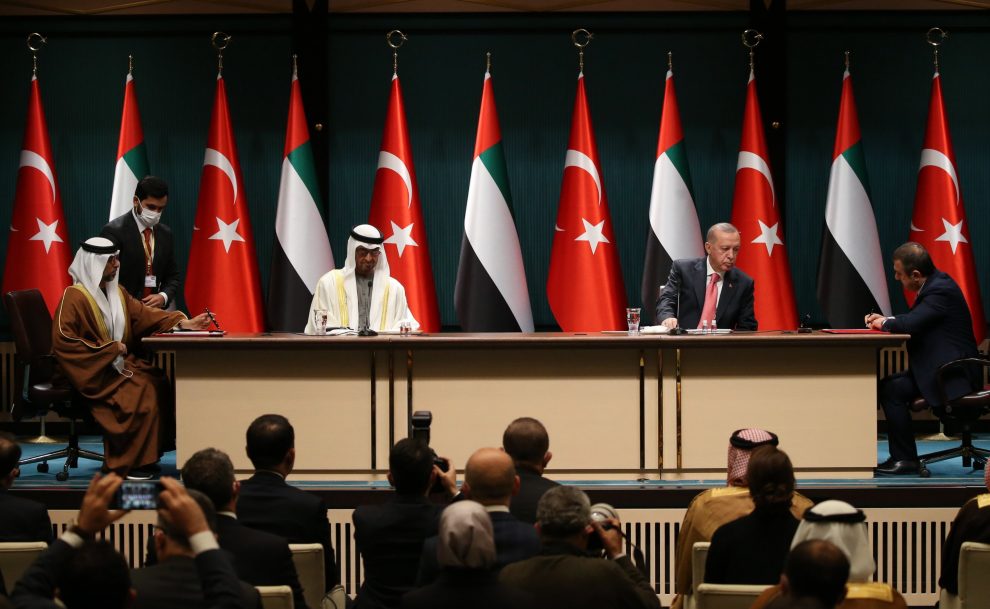 The decision by Turkey and the United Arab Emirates (UAE), which experienced major tensions in many areas just a year ago, could potentially influence normalization attempts in the Middle East. It would certainly make sense to view that rapprochement as one of the most significant developments of the year.

It remains to be seen where normalization, which was informed by assessments of mutual interests, will take the countries and how it will impact disagreements in some key areas like Libya, the Eastern Mediterranean and Syria.

One must underline, however, that Ankara and Abu Dhabi have been encouraged to work together, after nearly a decade of fierce competition, by geopolitical considerations and lessons learned from ambitious foreign policy initiatives.

It is no secret that regional powers across the Middle East have pursued normalization for some time. There are ongoing attempts to de-escalate tensions between Saudi Arabia and Iran, the UAE and Iran, and Saudi Arabia, the UAE and Qatar. The driving force behind those developments was the Biden administration’s decision to end America’s support for Saudi Arabia and the UAE, reversing Donald Trump’s policy. At the same time, the diminishing influence of the “maximum pressure” policy against Iran, with which the United States could reach another nuclear agreement, encouraged regional powers to revisit their strategic calculations.

Needless to say, the UAE took the relevant steps quicker than the rest. That country has repeatedly stated that it pursued normalization with Turkey, Egypt, Israel and Saudi Arabia. The quick recovery, which has taken place between Ankara and Abu Dhabi, and Tehran and Abu Dhabi, however, has not taken place elsewhere yet.

Normalization between Turkey and the UAE is rooted in realism and pragmatism. Ankara’s decisiveness and accomplishments during the Qatar blockade of 2017 and as a result of its intervention in Libya, two years later, compelled Abu Dhabi to develop a new kind of relationship with Turks. Moreover, problems with the Emirati intervention in Yemen required that country to take certain steps in a different direction.

Having relied on its military might in Syria, Libya and the Eastern Mediterranean, Turkey, in turn, opted for normalization with fellow regional powers, including the UAE, to cement what it gained during the tensions. At the same time, the breakdown of global supply chains during the coronavirus pandemic created certain economic opportunities for Turkey and the UAE, which resulted in this week’s visit and the conclusion of 10 major agreements.

At a time when observers expect normalization with the UAE to expedite normalization with Israel, Egypt and Saudi Arabia, the following question remains: How will this economic rapprochement between Ankara and Abu Dhabi impact other problem areas?

It would be unrealistic to expect two ambitious nations to address their disagreements right away. Shared economic interests could obviously encourage certain types of renegotiation and bargaining regarding regional crises. Still, this new chapter is about simultaneous competition and cooperation between Turkey and the UAE in places like the Eastern Mediterranean, Greece, Libya and the Horn of Africa. That development will inevitably entail a new kind of relationship. Indeed, both sides know how the other will react if they were to step on their toes.

Moving forward, this new type of relationship will face the following tests: The UAE’s support for Greece could make Turkey uncomfortable, and the UAE’s steps to empower the Assad regime, YPG militants and Iran in Syria will be a problem. Meanwhile, in Libya, where a fiercely contested election will take place soon, Turkey and the UAE could play tug-of-war or launch a joint initiative. Additionally, Ethiopia could emerge as an area of cooperation.

It goes without saying that there are other areas of competition that will be relevant, but here’s the main point: Turkey and the UAE have reached the stage where they can manage their competition through negotiations.