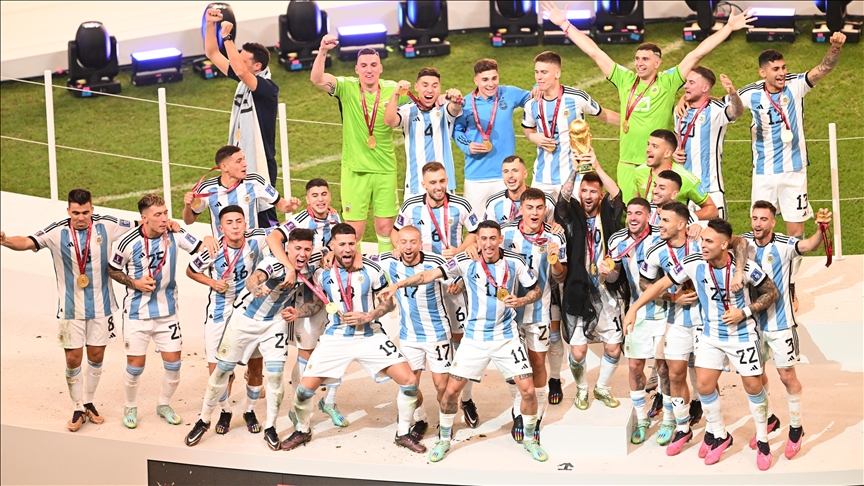 The two sides ended level on 3-3 after an enthralling 120 minutes at the Lusail Stadium, with Kylian Mbappe’s stunning hat trick twice pulling France level from behind to force the game to spot kicks.

Messi opened the scoring in the 23rd minute, coolly dispatching a penalty after winger Angel Di Maria was brought down by Ousmane Dembele.

Di Maria then got on the scoresheet in the 36th minute, finishing off a sweeping move from close range to send Argentina into the break firmly in control.

They could have had a third in the 58th minute, but French goalkeeper Hugo Lloris saved Julian Alvarez’s close-range shot.

France narrowed the gap in the 80th minute with a penalty kick from Mbappe, the first of what would become the first hat trick in a World Cup final in 56 years.

Mbappe had his second just a minute later, finishing off Marcus Thuram’s assist with a crisp strike to level the match at 2-2.

Messi was denied a late winner by a fine Lloris block, leaving the scores tied at 2-2 after normal time.

Despite several efforts, neither side was able to break the deadlock in the first half of extra time.

Messi scored his second of the night in the 109th minute, forcing the ball in after Lloris blocked Lautaro Martinez’s shot.

There was yet more drama in store as France were awarded a penalty for a handball by Gonzalo Montiel in the 117th minute, and Mbappe stepped up to score his third.

Argentina claimed a 4-2 win in the penalty shootout to lift their third World Cup in history.

For Martinez, Argentina’s triumph was a matter of “destiny.”

“It was a very complicated match. They came back to equalize in the game, but it was our destiny,” he said after the pulsating clash.

“All that I have dreamed of has been achieved. I have no words for it. I was calm during the penalty shootout, and everything went as we wanted,” he added.

Mbappe went home with the Golden Boot for his tournament haul of eight goals.