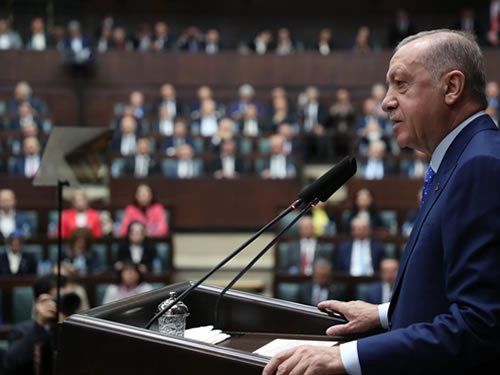 Addressing AK Party’s parliamentary group meeting, President Erdoğan said: “We are the foremost among the countries lending the biggest support to the Alliance’s activities in practice. Yet, this doesn’t mean that we will say ‘yes’ to every proposal brought before us. NATO’s enlargement is meaningful to us only to the extent that our sensitivities are respected. Asking us for support for NATO membership while providing every kind of support to the PKK/YPG terrorist organization amounts to incoherence to say the least.”

President and Justice and Development Party Chairman Recep Tayyip Erdoğan made a speech at the party’s group meeting at the Grand National Assembly of Türkiye.

Commencing his address by marking the 103th anniversary of May 19, 1919, which he described as one of the most critical milestones in the Turkish nation’s fight for independence, President Erdoğan said: “May 19, which had taken its place in our history as May 19 Commemoration of Atatürk, Youth and Sports Day, symbolizes our nation’s resolve to draw up its own path without giving into impositions even under the harshest circumstances. Both the dignity, glory and honor of this process—which started from Samsun, continued in Ankara and reached its final goal in İzmir, and was afterwards crowned with the proclamation of the Republic—belong to our nation. On this occasion, I remember with mercy all who contributed to the execution and victory of our national struggle, first and foremost Ghazi Mustafa Kemal Atatürk, as well as our martyrs, ghazis and heroes.”

“WE EXPECT OUR ALLIES TO UNDERSTAND OUR SENSITIVITIES”

Noting that the world today is faced with greater and bigger threats caused by the Ukraine-Russia war following the pandemic crisis, President Erdoğan stated: “The global system of economy and government is being shaken to its foundations. Economic troubles, which are best epitomized by the inflation triggered by exorbitant hikes in energy and raw material prices, distress all, developed countries in particular. The fact that the humanity has come to the brink of a great confrontation yet again after the Second World War as made visible by the war on Ukrainian territory has brought security balances to the forefront. NATO is in pursuit of enlarging its eastern borders. Accordingly, various steps are being taken with a view to enlargement.”

“It would be fair to say that it is with some tears in our eyes and with a little smile on our face that we are watching the solidarity and cooperation displayed in the region following the Ukraine crisis, the resources being mobilized, the arms being opened and the tolerance being shown,” the President stated, adding: “That is so because we, as a NATO ally that has been fighting against terror for years, with its borders being harassed and massive conflicts taking place next to it, have never experienced such a picture. Our only expectation from our NATO allies is for them to show the same good faith to Türkiye’s efforts aimed at protecting its own borders and reinforcing its security and stability. We expect our allies to first understand our sensitivities and then to respect and finally, if possible, to support them.”

Stressing Türkiye’s sensitivities as regards the administrations which have turned into a source of instability right beside its own borders, President Erdoğan stated: “We pay the price for these troubles by hosting refugees numbering millions. And we couldn’t see any ally understanding our problem on this issue until after refugees headed for western countries. What is more, we know so-called allies who covertly provoked this process just in order to put Türkiye in trouble and these are, take no offence, our allies in NATO, we know them very well.”

President Erdoğan continued his remarks as follows: “We have sensitivities arising from our responsibilities towards our brothers with whom we enjoy strong historical and humanitarian ties. Whatever the conditions, we cannot turn our back on these people, to whom we are linked by the legacy of a common history and civilization. It is clear that our allies don’t share this approach of ours although they show unlimited tolerance for some countries within NATO and the European Union that engage in every kind of spoiled acts and abuse the massive resources allocated to them.”

Underlining that Türkiye continues to properly fulfill its responsibilities within the Alliance despite the attitudes the NATO allies display towards Türkiye, President Erdoğan stated: “Today as well, we are the foremost among the countries lending the biggest support to the Alliance’s activities in practice.  Yet, this doesn’t mean that we will say ‘yes’ to every proposal brought before us. NATO’s enlargement is meaningful to us only to the extent that our sensitivities are respected. Asking us for support for NATO membership while providing every kind of support to the PKK/YPG terrorist organization amounts to incoherence to say the least.”