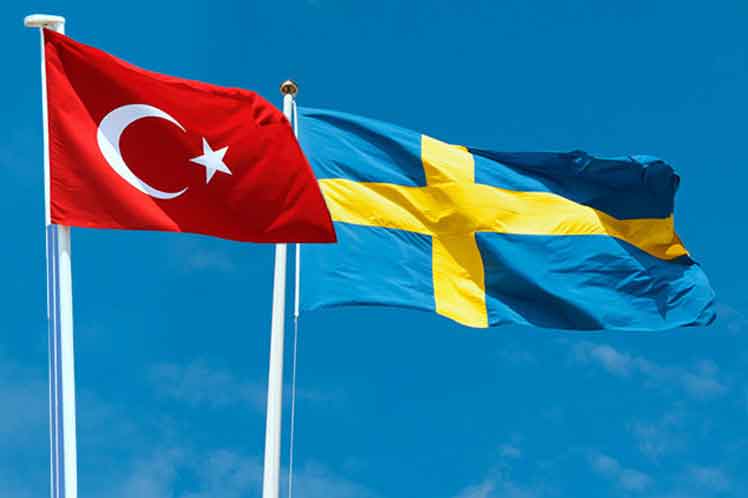 My two cents, as someone who has been following Sweden’s NATO accession bid, has had the opportunity to chat with Sweden’s PM and understands Turkiye’s concerns. 1) It’s very clear to see from the timing of this recent ugly act by the PKK that not only Turkiye, but Sweden’s NATO bid and Turkish-Swedish relations are being targeted by the terror group. Sweden has entered a critical stretch. It must not allow its interests and national security to be held hostage by a handful of terrorist sympathizers.

2) Sweden is an advanced democracy with a great legal system, which is often cited as the reason for allowing the PKK terror group to undertake its propaganda. With the utmost respect for Swedish laws, I truly believe that when laws compromise a State’s pursuit of critical interests, national security, and provide loopholes for terror propaganda – they need to be amended. I can not imagine the people who wrote these laws envisioning them being to be used with the intent to propagate a terror group’s narratives. I do hope that Swedish people are fed up with being used as collateral damage by the PKK. Sweden deserves to be under the NATO security umbrella just as Turkiye deserves having allies it can trust. Turkiye’s conditions for membership and concerns are very legitimate and can be met if there is political will.

3) In my brief chat with the Swedish PM, I felt that he was sincere and truly wanted to address Turkiye’s security concerns and complete the NATO membership process. But sincerity requires action. I’m far from being an expert on Swedish domestic politics, and I don’t know the level of support, he and his coalition government have to amend laws that would exclude terror propaganda from freedom of speech, but I hope that Swedish public opinion towards supporting the necessary amendments is growing. For those that say this sets a dangerous precedent regarding freedom of speech, I would say that I Swedish democracy and its legal system is advanced, mature, and responsible enough to determine and establish this precedent. As we enter an age of hybrid terrorism, which creates new challenges, we will have to adjust to create solutions. The discussion on freedom of speech and terror propaganda will become more frequent. Sweden has a golden opportunity to create a Swedish model on this issue. 4) I see a lot of articles that read, “Turkiye is blocking Sweden’s NATO membership.”

The only one blocking Sweden’s NATO membership is the PKK, and only Sweden has the power to lift that block. After the MOU between Turkiye, Sweden, and Finland was signed at the NATO Madrid Summit, the ball was placed in Sweden’s court, literally and figuratively. Turkiye provided both NATO candidates with a very specific roadmap for membership. Turkiye has always been a strong advocate for NATO expansion. A Sweden and Finland that respects Turkiye’s security concerns would be a valuable addition to NATO from Ankara’s perspective.

It would create a longer eastern front and ease the security burden on Turkiye’s shoulders. But, Ankara wants allies it can trust, and it hopes that its decisive stance on this issue will show member states how serious it is on the issue of the PKK. If the terror group in question was ISIS or AQ, this whole process would most likely have been solved very quickly. There is no such thing as a good vs bad terror group. The recent vandalism in France by the PKK and its sympathizers should be a stark reminder that these groups can easily pose a threat to their host country the minute they want. Terrorism is a shared enemy of NATO and Turkiye and Sweden. Whether the name of the group is ISIS and AQ, or PKK and FETO – terrorism in all its forms is a threat against humanity.