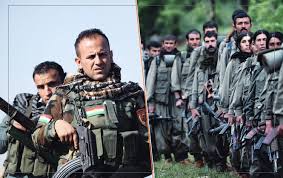 The last decade can be considered the PKK terrorist group’s golden age. Feeding off the Gülenist Terror Group’s (FETÖ) infiltration of the Turkish state and abusing the vacuum of power caused by the crisis in Syria, the PKK had the confidence to incite civil war in Turkey’s southeastern provinces. In 2016, the PKK brainwashed children from poor neighborhoods, taking them into their ranks in a bid to occupy city centers.

The PKK resorted back to violence once the reconciliation process came to a close. The peaceful process had the support not only of the predominantly Kurdish southeastern provinces but the country as a whole. In managing the proceedings, President Recep Tayyip Erdoğan took a serious political risk. But unfortunately, the PKK went back to its old ways, launching terrorist attacks from trenches the group had built in cities.

The PKK’s trench terrorist attacks coincided with a period of national and regional turmoil. FETÖ attempted a coup, the Syrian balances of power were precarious and the Turkey-U.S. alliance had been damaged. All the while, Iran, Russia and even the Daesh terrorist group were attempting to influence war-torn Syrian territories.

In the face of these growing threats, Turkey launched an all-out offensive on terrorism, namely targeting Daesh, the PKK and FETÖ. The move would mark a paradigm shift in Turkey’s military and foreign affairs.

Turkey succeeded in vanquishing each of the terrorist organizations, countering the YPG/PKK 30 kilometers (18.64 miles) from its borders. As the first state to directly wage war against Daesh, Turkey shattered the group’s invincible image. The PKK, retreating into Iraq, now threatens the political stability of the Kurdistan Regional Government (KRG) in the country’s north.

Following the U.S. invasion, Iraq was stormed by both Iran and the PKK. The U.S and Iran’s main objective was to perpetuate the image that the country was in political turmoil.

As the Iraqi central government struggled to protect the country’s territorial integrity, Turkey proved itself to be the only regional actor to support the country’s political stability.

Turkey’s military operations drove the PKK from its borders, leading the terrorist group to turn its attention to the KRG government. Since the Sinjar agreement heavily restricts Iran’s cross-border operations and influence in the region, it tries to apply pressure on Turkey, Iraq and the KRG using the PKK.

Turkey emerged stronger from the recent Nagorno-Karabakh conflict, while Iran failed to take concrete steps and was excluded from the diplomatic processes. Since the killing of Iranian Gen. Qassem Soleimani, a key figure in the country’s cross-border operations, Iran’s strategic capabilities have become limited.

Transformed into a militia force at the hands of the U.S. and Iran, the PKK now not only terrorizes Turkey’s Kurdish population but also Iraq’s. Despite the KRG’s former President Masoud Barzani declaring the Kurdish-on-Kurdish war “haram” (forbidden by Islamic law), the PKK has already transformed into a murderous ring, threatening the Kurdish people in U.S. and Iranian interests.