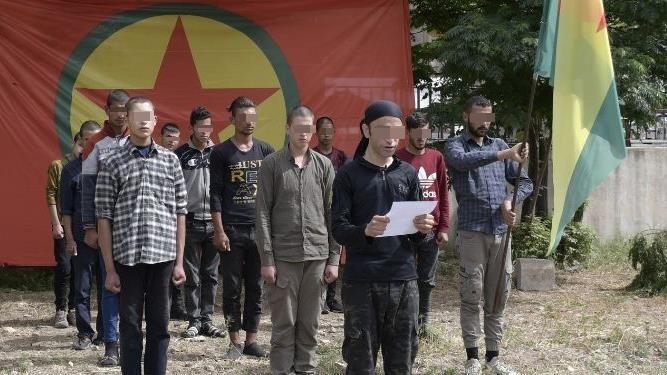 In decline after Türkiye’s successful operations against it, the PKK terrorist organization continues to forcibly recruit children that it kidnaps in Syria and Iraq.

The terror group has sustained heavy blows as public support has been cut off in Iraq, Syria, Iran, and Türkiye, especially after the Claw operations that Ankara launched in recent years.

Its weakened state is also apparent from its so-called media outlets, which have made calls for public demonstrations and protests that have fallen on deaf ears.

While supporters of the terror organization are barred from demonstrating in the Iraqi city of Erbil, its protests in the city of Sulaymaniyah have also had few participants.

The PKK is trying to preserve its flagging power by deceiving and forcibly recruiting children, whose families are now increasingly raising their voices in protest against the terrorists.

A sit-in protest staged by the families of young people abducted or forcibly recruited by the PKK and its Syrian offshoot, the YPG, has now passed its 1,000th day outside the office of the pro-PKK Peoples’ Democratic Party (HDP), showing the world how the organization abuses children.

The PKK/YPG continues its use of children as fighters despite an agreement with the UN to release them.

Mohammed Alo, a Syrian Kurdish activist, told Iraqi journalists that the PKK-affiliated “Revolutionary Youth” organization kidnapped a girl named Culya Tarik Dedo in front of a school in the Syrian city of Aleppo.

According to a report from Gulanmedia, an outlet affiliated with the Kurdistan Democratic Party (KDP), Iranian mother Meryem Hidir said her 13-year-old daughter Esrin Muhammed was kidnapped by the PJAK, the Iranian branch of the PKK, and that her daughter was killed while trying to escape the organization.

In another case, the PKK kidnapped two people in Duhok in July 2019, according to Iraqi media, with their fate still uncertain.

According to a report by the northern Iraqi Rudaw television network on May 21, Meryem Ferid Muhammed was kidnapped by the terrorist group in the town of Ayn al-Arab in northern Syria on Oct. 31, 2021. Her father, Ferid Muhammed, requested her rescue on live TV.

Sakir Muhammed Hibo, a 14-year-old boy from the city of Qamishli, and Fehed Abdulrahman, a 15-year-old from the Ayn al-Arab’s industrial zone, were also reportedly kidnapped by the terrorists. Their families spoke to local media, asking for their children to be rescued.

Iraqi media also reported the abduction of two young brothers in Aleppo, forcing them to join the PKK/YPG’s armed ranks.

According to local sources, Ibrahim, just 9 years old, and Muhammed Sevki Yusuf, 10 — both born in the nearby town of Afrin — were kidnapped last Sunday by PKK/YPG terrorists in the city center of Aleppo, some 42 kilometers (26 miles) from their home town, on June 5.

Anadolu Agency reported that on June 10, images on social media close to the PKK/YPG showed the terrorist organization had recruited 11 more children of Kurdish and Arab origin.

The image shows the children were carrying a poster of Abdullah Ocalan, the jailed ringleader of the PKK, and the terror group’s so-called banner.

Abdulaziz Temmo, the head of Syria’s Independent Kurdish Association, told Anadolu Agency on June 7 that abductions of children under the age of 10 by PKK/YPG had risen over the last six months.

A written statement on April 1 by the Syrian Network for Human Rights (SNHR) said the PKK/YPG had kidnapped two girls, aged 16 and 17, named Rosil Seyho and Zahide Kocar from Sheikh Maqsood neighborhood in Aleppo.

The statement said the terrorist organization did not allow the children they abducted to see their families, and that the girls were taken northeast from Aleppo to the PKK/YPG terror camps in the Manbij district for weapons training.

While the PKK in Iraq forcibly recruits Yazidi children it kidnaps in the Sinjar district of Mosul, Iraq, Yazidis have been holding protests for their children’s release.

The US Department of State also mentions the PKK/YPG’s forced recruitment of children in the 2020 Human Smuggling Report that it released on June 26, 2020.

A January 2020 report by the UN human rights office (OHCHR) also said its findings suggest that the PKK/YPG is using children as fighters in Syria.

In July 2019, Virginia Gamba, the UN secretary-general’s special representative for children and armed conflict, signed an action plan with the SDF — the label that the PKK/YPG terror group uses in Syria — to end and prevent the recruitment of minors under 18. However, the terror group has continued to violate this plan.

The terrorist organization usually takes young people and children it kidnaps or detains to terror camps for armed training, barring them from communicating with their families.

Images and news about child fighters are also featured in the so-called media outlets of the terrorist organization.

In its more than 35-year terror campaign against Türkiye, the PKK — listed as a terrorist organization by Türkiye, the US, and the EU — has been responsible for the deaths of over 40,000 people, including women, children, and infants.