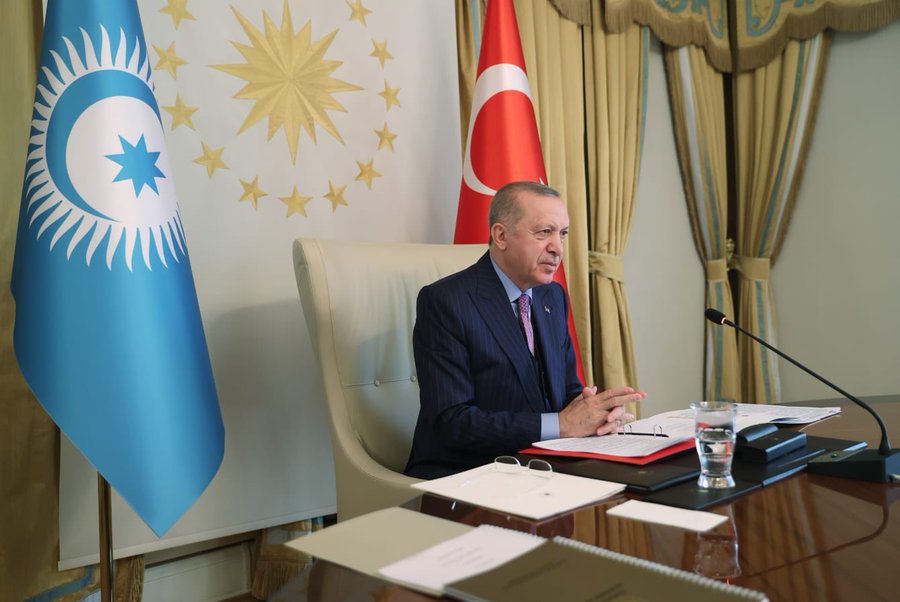 President Recep Tayyip Erdoğan addressed via videoconference the Summit of Heads of State and Government of the Turkic Council.

Extending his congratulations to the Turkic World on the occasion of the Nowruz, President Erdoğan said: “I wish this festival, which is our shared cultural heritage and symbolizes peace, love and toleration, may bring joy, health and serenity to the whole humanity.”

Describing the Turkic Council, established 12 years ago, as the most visible form of the concepts of unity and solidarity, President Erdoğan stated: “Our Council will grow stronger once our Turkmen brothers and sisters join us first as an observer member and then as a full member in a manner that will not undermine its permanent neutrality status. Turkey will support every effort to be made to this end by the Council.”

“The changes facing the world render cooperation structures like the Turkic Council more important,” President Erdoğan underlined, further stressing that the pandemic’s effects on trade volume were minimized thanks to the decisions taken at the extraordinary summit as well as at the following meetings of relevant ministers.

Noting that the Science Committee for Health, formed within the Council, convened six times during the pandemic and that scientists came together as part of the Vaccine Workshop, President Erdoğan stated: “We act in solidarity in accordance with our law of brotherhood regarding issues that concern our independence, territorial integrity and sovereignty as well.”

Congratulating once again President of Azerbaijan Ilham Aliyev for the victory in Nagorno-Karabakh, President Erdoğan said: “Following a 44-day long legendary struggle, the 30-year long occupation was brought to an end and Nagorno-Karabakh was reunited with the motherland.” The President also emphasized the importance of solidarity with Azerbaijan in order to preserve and revive the Turkish heritage in Karabakh.

Acting in solidarity with Turkish Cypriots, an inseparable part of the Turkic world, is also a necessity of brotherhood, underscored the President, adding: “I am fully confident that you will spare no effort to provide Turkish Cypriots with the assistance they need for the removal of injustices and embargoes they have been facing for years. Turkish Cypriots’ participation in the Turkic Council’s activities in such fields as culture, education, science and sports will help alleviate the effects of isolation. I believe that we can elevate Turkish Cypriots to their rightful place through cooperation.”

Drawing attention to the importance of promoting combined transport within the Turkic World, President Erdoğan pointed out that ensuring uninterrupted and unhindered connection to Europe via the Trans-Caspian East-West-Middle Corridor would further increase the strategic value and prosperity of the member states of the Turkic Council.

Works carried out within the Council in this regard should gain momentum, the President further stressed, highlighting the importance of accelerating the ongoing negotiations to conclude the Agreement on International Combined Freight Transportation.

Pointing out that the Turkic Council, having completed its institutionalization in 12 years, also enjoys a significant prestige internationally, President Erdoğan stressed that it was high time to rebrand the Council as an “International Organization” and that a decision to this end would be taken at the Council’s next summit in Turkey.