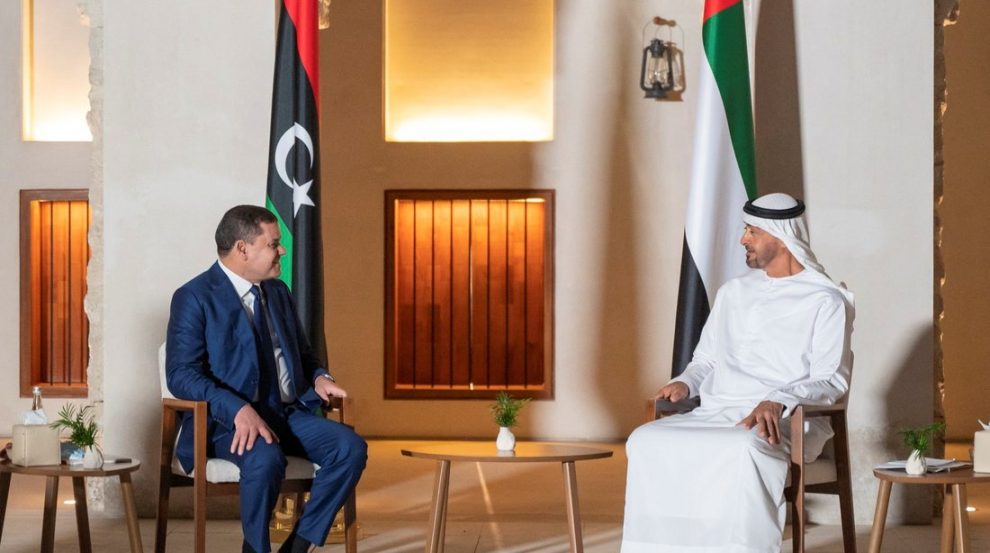 Libya’s internationalized civil war of 2019 paved the way for the rise in prominence of Turkey and Russia in Libya. After initially intervening to back the country’s warring factions, Moscow and Ankara de-escalated and have since focused on entrenchment, attempting to carve up Libya into separate spheres of influence.

Yet, an underemphasized cog in the wheel of precarious peace—which has prevailed in Libya since the end of the 2019-2020 war—is a shift in the United Arab Emirates’ (UAE) policy. While this reconfiguration is partly attributable to the Middle East’s “great reset,” Abu Dhabi’s “zero-problem” policy with neighbors and its thaw in relations with regional rivals, Libya-specific dynamics have also played a central role in shifting the Emirates’ calculus.

The UAE’s interventionism in Libya goes back to 2011. The UAE viewed Libya as a central battleground for the order of post-revolutionary states after the 2011 Arab uprisings, with the aim of curtailing the role of Islamist parties, like the Muslim Brotherhood, in governance.

This policy crystallized as exclusive political and military support for General Khalifa Haftar and his Libyan Arab Armed Forces (LAAF) in 2014.

To support Haftar’s war effort to counter Islamists and political opponents in Eastern Libya, the UAE balanced between unilateral interventionism and funneling support using Egypt as a proxy, leveraging the Egypt-Libya land border. It also used its soft power in the Elysée, supporting France’s impulse to provide military and diplomatic support for the Libyan general.

These efforts boosted Haftar’s international standing while helping him secure control over Eastern and then Southern Libya, as well as Libya’s oil crescent, primarily using UAE-supplied equipment and aerial support.

Emirati military support for Haftar peaked in 2019-2020, attracting negative attention that added to the reputational toll of its involvement in the Saudi-led coalition in Yemen. During Haftar’s offensive, the UAE conducted hundreds of drone strikes on Haftar’s behalf, supplied him with weaponry and jet fuel, and financed Sudanese mercenaries that fought with his LAAF.

Despite this, Haftar’s war effort faced setbacks, prompting Abu Dhabi to re-adjust its foreign policy to pre-empt increased scrutiny over its military adventurism.

Instead of ramping up direct interventionism to support Haftar’s offensive on Tripoli, Abu Dhabi became the conduit for Russian paramilitary forces’ on-the-ground engagement in Tripoli’s suburbs.

According to the US Department of Defense, the UAE allegedly underwrote parts of Moscow’s intervention in Libya by potentially funneling payments to the Wagner Group, a sanctioned Russian mercenary group.

These intervened at a critical moment for Haftar and offset his diminished ability to mobilize ground troops for his offensive. The reshuffle of Libya’s executive after a United Nations-sponsored political dialogue in 2021 was another moment of adjustment for the UAE’s policy.

Coincidentally, the arrival of the Government of National Unity (GNU) quickly followed Abu Dhabi’s formalization of the Abraham Accords and its increased focus on regional neighbors, such as Israel.

While the UAE did not change the essence of its foreign policy, its rhetoric contrasted sharply with the former, more muscular approach to foreign policy Abu Dhabi employed.

Though initially uneasy with Dbaiba due to his ties in Libya’s Islamist milieu, the prime minister—who is also not a champion of liberal democracy—eventually secured Abu Dhabi’s acquiescence due to his transactional approaches aligning with Abu Dhabi’s foreign policy shift.

Adding to Emirati relief was the fact that Dbaiba did not preferentially empower Islamist actors within his executive. This led to a burgeoning relationship between Abu Dhabi and Tripoli, with Dbaiba seeking to revive the Gaddafi-era deals with the Emirates in the telecommunications, energy, and construction sectors, as well as covertly negotiating Emirati companies’ access to operate free-trade-zones, economic zones, and ports.

Conversely, Abu Dhabi’s most notable concession vis-à-vis the GNU has been its quiet scaling down of financial support to pro-Haftar partisan media outlets and TV channels it was suspected of funding, forcing some to shut down. These developments were also influenced by the fact the UAE was engaging in a fast-paced rapprochement with Turkey that led to boosted economic ties with Ankara.

The implications of the United States’ chaotic pull-out from Afghanistan in 2021 had led the Emirates to prioritize expanding alliances in an effort to avoid dependence on the United States.

This led it to focus on regional diplomacy, bringing Abu Dhabi closer to Ankara. In Libya, it was, in turn, more pragmatic for the UAE not to compromise its rapprochement with Turkey by doubling down on Haftar or undermining a Turkish-backed Dbaiba.

Instead, the UAE focused on brokering conciliative meetings and shuttle diplomacy between Dbaiba and Haftar’s circles, attempting to manufacture power-sharing arrangements between both. The replacement of Sanalla as National Oil Corporation (NOC) Chairman—executed by Dbaiba and followed by Haftar lifting his then-blockade on oil ports—is perhaps one of the most notable impacts of this mediation to date.

In choosing not to compromise its rapprochement with Turkey and supporting Dbaiba, the UAE has broken with its long-standing standing partners in Libya: Egypt and France.

Since March of this year, the latter have focused on openly undermining the GNU, instead, backing the bid of former Libyan Interior Minister Fathi Bashagha for the post of Prime Minister. The UAE has conspicuously not partaken in this effort.

While aforementioned dynamics played a part in shaping the Emirates’ new policy of equidistance between Haftar and Dbaiba, other underemphasized factors played a part in the Emirates’ apathy towards Bashagha. For one, his bid forces a relapse into a conflict that would see the UAE compromise its current economic ties with Tripoli.

Moreover, should Abu Dhabi partake in another bout of Libyan war, the Emirates would incur unwanted reputational damage and be forced to compromise its relations with either Turkey, the United States, and/or Russia depending on the position it takes.

Another concern is that Bashagha’s bid for prime minister is backed by prominent figures of Libya’s Muslim Brotherhood with links to Qatar, the UAE’s regional rival.

Lastly, it is also suspected that Abu Dhabi has a personal animosity towards Bashagha, who played a prominent role in countering the Emirati-backed offensive of Haftar on Tripoli in 2019. Some speculate that Emirati officials hold Bashagha responsible for the alleged death of six Emirati soldiers, who were covertly deployed to the Libyan airbase of Jufra, by a drone strike in late 2019.

All in all, the extent to which the UAE’s policy shift towards Libya has been part of a regional recalibration on its part should not be overemphasized.

As an influential actor in the Libyan landscape for over a decade, it comes as no surprise that changes in Emirati policy have had a direct impact on levels of (in)stability in Libya, with Emiratis’ shift in position now positively influencing a protracted lull. But the UAE’s shift has also been affected by developments in the Libyan context, a theater whose only constant is its volatility.

While Libya’s relative peace has endured since its internationalized civil war ended in 2020, policymakers should not rest in complacency thinking this new regional order is the new normal.

The house of cards of ostrich policies, short-term outlooks, and transactionalism upon which the Middle East’s great reset is built may endure a while. However, the geopolitical calculus preserving peace in Libya may well collapse to the country’s exceptionalism long before that.