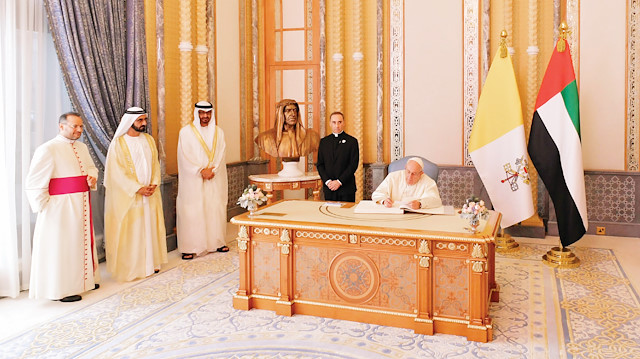 The pope’s United Arab Emirates (UAE) visit is, in every aspect, a milestone in relations between the Islamic world and the global system under Western control.

The ritual led by Pope Francis at a stadium in Abu Dhabi, his meetings with officials, primarily those with the UAE’s Crown Prince Mohammed bin Zayed and Al-Azhar’s Sheikh Yousef El-Tayeb, is the milestone of a century-old strategy that will turn upside down the theopolitical and geopolitical maps specifically of the Arab world, and in general that of the Islamic world.

The timing of the visit is, in this sense, quite telling, and is due to give rise to long-term outcomes that will confirm what I will be stating here.

This visit, made under the title, “Brotherhood of Humanity,” is not going to bring “peace, calm and brotherhood” to the region as claimed. On the contrary, this visit is going to lead to both the geopolitical and theopolitical borders of the region to be drawn in blood. The primary purpose of this visit is theopolitics: this is the official launch of the project to protestantize Islam. I will return to this topic again later on.

Bu we first need to make the observation that the pope’s visit is a result of U.S. President Donald Trump’s visit to Gulf countries and the geopolitics-based move Trump, Egypt’s Abdel-Fattah el-Sisi, and the Saudi king determined by placing their hands on that strange orb.

First, Trump came and laid the geopolitical foundations. Then, the pope came and announced the theopolitical strategy.

I would like to particularly underline the point that it will be theorpolitical maps to determine the future of the Islamic world, more so than geopolitical ones.

This point is crucial.

A century ago, imperialists had drawn the geopolitical and geostrategic maps of the Islamic world and stopped the Islamic civilization’s march by collapsing the Ottoman Empire dividing Muslim India, and tearing the Arab world into pieces.

Now, they want to stop Islam by destroying their theo-political and theo-strategic maps. This is their century-long strategy.

What does it mean to stop Islam, what do I mean by this?

It means the transformation of Islam.

Well, how do they want to transform Islam?

They first want to destroy the mainstream Muslim backbone, which determines the Islamic world’s historic axis, which has been led and represented for a millennium by Turkey. This is why they castrated Pakistan, took control over Egypt, and are trying everything to force Turkey to kneel, the three countries that form the trivet of the mainstream Muslim backbone. This is why Iran’s path was cleared in the last quarter century: Iran was placed in the Arabian region for geopolitical purposes, and the ground necessary to allow Iran to settle theopolitically in the region in the upcoming century.

For now, they want to invent a fake Sunni-Shia conflict, completely destroy the Islamic world’s chance of recovery, and sow the seeds of an Islamic civil war.

They are tasking the Sunni wing of this Sunni-Shiite conflict to the Wahhabi Gulf region led by the Saudis, whose relation with Sunnism is relative at best. By pitting Iran and the Wahhabis against each other – as in Syria, Iraq, Lebanon, and especially Yemen – they are paving the way for Iran.

Thus, they are dreaming of pitting the Sunni world led by Turkey, in other words Turkey, against Iran. Through the strategic steps taken so far, they are laying the foundations that will turn this dream into a strategy, step-by-step.

Turkey is the ultimate target!

Turkey will never – and should never – take this bait. For this, it needs to act in deep stillness with strategic intelligence, and take steps that will foil the theopolitical plans prepared through Saudi Arabia and Gulf countries.

Second, the imperialists are following a theopolitical strategy that will transform Islam and prostestantize it through Saudi, Egypt and Gulf countries. The pope’s visit is an extremely dangerous one that targets Turkey in the long-term in terms of the results that it will herald.

We should know that the imperialists do not care about the Middle East’s oil reserves and natural resources. Their only care is the transformation Islam, and eliminating the dynamics that will allow Islam to reconquer the Islamic world and make a civilizational leap forward.

Turkey is the sole country that will make is possible for the Islamic world to make another civilizational leap forward.

Turkey is the sole country that will foil the protestantization project.

Hence, despite a terrifying secularization process that took place, Turkey gaining strength and becoming a regional power is enough to frighten the West and cause it is to see nightmares.

I will underline it again: The corrosion of Islamic values in Turkey, the formation of a void of meaning, a shallow understanding of Kemalism peaking for this reason, are of course, frightening developments taking place. We need to pinpoint these problems and contemplate over them. We first need to start a radical and realistic self-criticism process, take important steps to ensure the community lays claim to its values, and overcome the socio-cultural collapse we are going through.

After all this, Turkey is going to start to play its historic role once again – as a millennium ago – in determining the destiny of the region, and by the grace of God, we are going to foil the West’s theopolitical strategies aimed at protestantizing Islam.