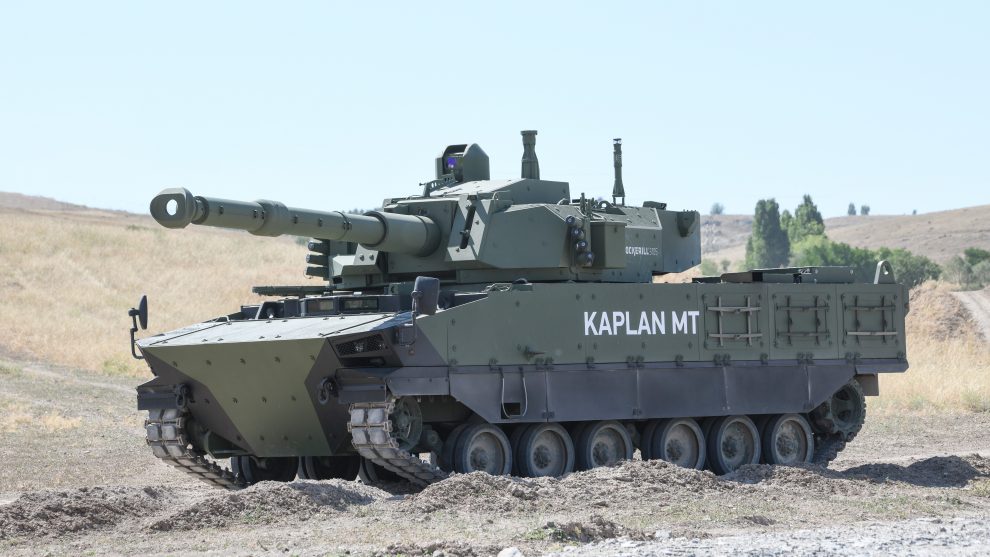 Turkey’s FNSS will ship 10 Kaplan medium tanks to Indonesia. FNSS will also co-produce 8 tanks in Indonesia, the company said in a statement. The total number of tanks to be produced is expected to be 106.

Kaplan has been named as Harimau by Indonesian army.

KAPLAN MT Medium Tank Project was initiated with G2G Agreement between Presidency of Defence Industries of Türkiye (SSB) and Ministry of Defence of Indonesia. In 2015, a corporation agreement was signed between DG Defence Potential of Indonesia and SSB in order to develop 2 prototype vehicles. Within the scope of the project under the KAPLAN MT (HARIMAU) Medium Weight Class Tank Serial Production Long-Term Collaboration Agreement signed between FNSS Savunma Sistemleri A.Ş. and PT Pindad in 2019, FNSS completed the production of the first batch of vehicles with the serial production configuration. The vehicles, developed within the scope of the Project were presented to the representatives from Indonesia Army, Indonesian Ministry of Defence, and PT Pindad management, with the attendance of Defense Industry Presidency of Türkiye and Ministry of National Defence of Türkiye. Following the “KAPLAN MT Medium Tank Platform Production Completion Ceremony” held in FNSS facilities, all tank platforms will be shipped to Indonesia for final turret assembly and delivered to Indonesian Army after the final acceptance stage

After the prototype development studies, FNSS has successfully completed the endurance and firing tests carried out in Indonesia. At the end of 2019, FNSS signed a joint production contract for a total of 18 KAPLAN MT vehicles and completed the design perfection studies carried out with the participation of end users in 2020. The production technical support and supply parts provided to PT Pindad for the vehicles to be produced in Indonesia were completed in 2021. These parts and subsystems were exported to Indonesia as tool kits and delivered to FNSS’ partner PT Pindad. As of the beginning of 2022, FNSS successfully completed its project activities and made the vehicles produced in Türkiye ready for user inspection. Within the scope of the project, the remaining vehicles will be produced in Indonesia by PT Pindad with the technology transfer model successfully implemented by FNSS.

While FNSS completed its design perfection studies in a short period of time and completed its production activities in Türkiye after acceptance, it once again demonstrated its export experience and success with the technology transfer model. The KAPLAN MT project also stands out by being Türkiye’s first defence export program in the Tank Class, which was started within the framework of the Defense Industry Cooperation Agreements signed between the Republic of Indonesia and the Republic of Türkiye.

Mustafa Dzhemilev believes in a favourable outcome of the war for Ukraine
Construction Market in Turkey to Record 4.76% Y-O-Y Growth Rate in 2022