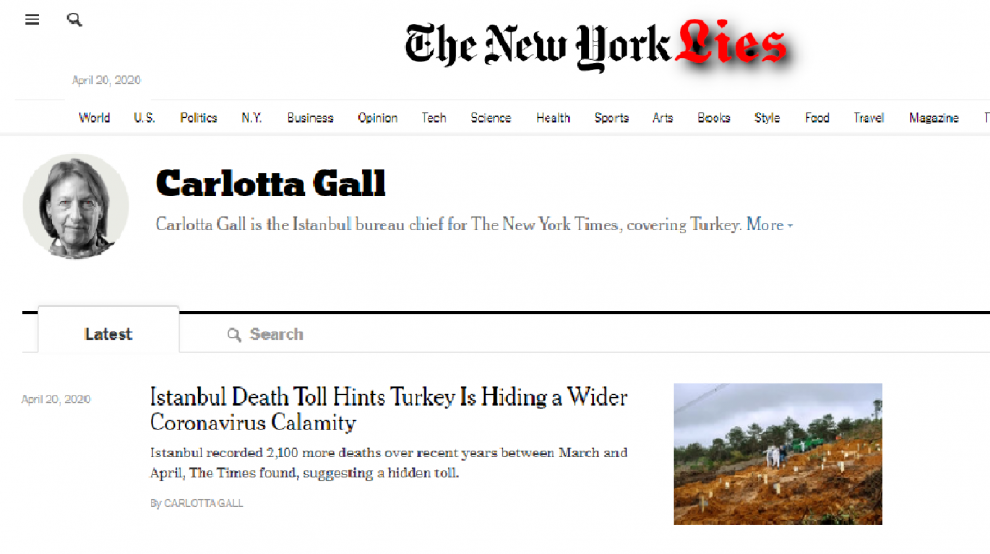 I have been living outside of my hometown for almost my entire life. I left my village on the steep hills of Black Sea Mountains when I was 10 years old. I lived in Istanbul and Ankara in Turkey and several other cities in different continents as far as New York. But that will not stop me from being buried at my distant village’s cemetery when the time arrives. And most of the Turkish people still prefers to be laid to rest in their home towns instead of cities where they have been living for generations.

That is exactly what New York Times and its oblivious Turkey reporter Carlotta Gall did not take into consideration when publishing an article that accused Turkey of hiding real coronavirus death numbers based solely on increased burials took place in Istanbul since the outbreak hit.

One of the most common services of municipalities in large Turkish cities like Istanbul and Izmir is transportation of the deceased people from the cities to the country side for burials. Almost every single municipality provide adequately equipped ambulances to its residents when their family members pass away to transport distant homes to all parts of Turkey.

New York Times claimed on its article published on April 20th that the number of recorded burials in Istanbul between March 9th to April 12th jumped by 2100 when comparing to same period last year and based its whole accusation on this single data. Turkish Health Minister Fahrettin Koca on Wednesday night refuted the New York Time’s accusation with simple statistics.

“Since 2009, the death number in Turkey between Jan 1- April 20 increased 2.89% every year. So for this period of 2020, we expected that number to be 156 thousand. But we witnessed 153 thousand death for the same period,” pointed out Koca in a calm and focus manner. “So Turkey actually recorded less death in the first 4 months of 2020 than previous years,” he pointed out.

So what is the explanation for increasing number of burials in Istanbul while the number of death dropped in Turkey during that period? The answer is in the Turkish culture explained above. Every month, thousands of deceased Turks are transported to country side of Turkey from villages near Iraqi border to hilltop cities on the Black Sea cost for burials. However, banned intercity travels as part of coronavirus lockdowns prevented Turks to take their loved ones to hometowns. Several hundred people had no choice but to laid the deceased family members to rest in Istanbul and other major cities for that matter.

That leaves us with point to explain. How come the number of death has been decreased in Turkey in the first four months comparing to same period last year. That is unplanned result of coronavirus measures like the intercity travel ban. Turkey is notorious for its casualties in car accidents. Turkish government has heavily invested in road infrastructure in the past 18 years but car accidents are still one of the leading causes of unnatural death in Turkey. For example, in 2018, during Aid Al Adha holiday, 119 people have been killed in car accidents throughout Turkey, mostly during intercity travels. So the coronavirus lockdowns and travel bans in place not just protected Turks from the virus-related death.