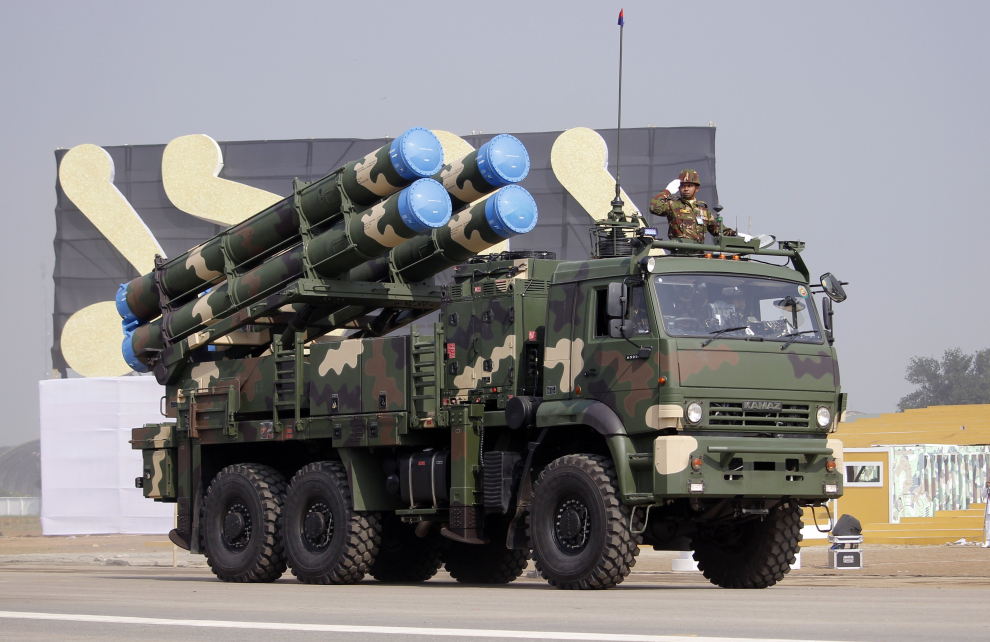 By Stijn Mitzer and Joost Oliemans

Bangladesh is the eighth-most populated country in the world with a population of more than 168 million. Despite boasting a force of some 225.000 military personnel that frequently deploys on peacekeeping missions throughout the world, the Bangladesh Armed Forces are notably lacking in long-range weaponry and modern combat aircraft. Forces Goal 2030, a modernisation programme that was originally launched in 2009, seeks to introduce these and other new capabilities as neighbouring Myanmar already has made great strides in expanding the capabilities of its military.

As part of Forces Goal 2030, the Bangladesh Army has put heavy emphasis on expanding the firepower of its artillery units through the acquisition of 49 122mm WS-22 MRLs, 36 152mm Nora B-52 self-propelled guns (SPGs), Chinese-made SLC-2 artillery locating radars and 36 Slovenian C4EYE tactical reconnaissance UAVs for target acquisition purposes. In 2021 Bangladesh received its most potent weapons system yet in the form of the TRG-300 Kasirga (Tiger) MRL with a maximum range of some 120km. In comparison, the 122mm WS-22 MRL has a range of some 45km.
A total of eighteen TRG-300 MLRs entered service with the Bangladesh Army’s 51 MLRS Regiment based at the Savar Cantonment near Dhaka. The 51 MLRS Regiment also operates the 122mm WS-22, which has 40 122mm rockets ready to fire with 40 more reloads carried on the truck. The WS-22’s 122mm rockets incorporate inertial terminal guidance, and therefore are more precise than those used by regular 122mm ‘Grad’ MRLs, with a Circular Error Probable (CEP) of around 30 metres. The Turkish TRG-300 can fire its four 300mm rockets out to a range of 120km (105kg warhead) or 90km (190kg warhead) with a CEP of less than 10 metres.

The TRG-300 is not the first type of military equipment acquired from Türkiye. The Bangladesh Army currently operates a fleet of Otokar Cobra I and Cobra II infantry mobility vehicles (IMVs) acquired throughout the 2000s and 2010s. These have been deployed in a number of peacekeeping missions. Bangladesh also operates nine Romanian-Turkish RN-94 APCs outfitted as ambulances. [1] Türkiye’s share as a supplier of arms and equipment to Bangladesh is only set to expand, with STM currently a front runner in Bangladesh’s future frigate programme. Bangladesh has also expressed interest in the Turkish Bayraktar TB2 UCAV and the Hisar-O SAM system. [2] [3]

Bangladesh’s TRG-300s are based on the chassis of a Russian KamAZ-65224 6×6 truck. As the launching vehicle for the TRLG-300 is modular, the same launcher can also be used to launch (guided) 122mm and 230mm rockets by simply swapping the rocket pods or launch tubes. This has the effect of greatly enhancing the operational flexibility of the system. The TRLG-122/230 guided rockets can also hit targets designated by UAVs equipped with a laser designator. This synergy with drones significantly expands on the capabilities already provided by the TRG-300s, and could end up as a cost-effective method to further expand on Bangladesh’s capabilities without needing to buy new launching systems.
Türkiye, Azerbaijan and the United Arab Emirates (UAE) are other confirmed operators of the TRG-300. Azerbaijan and the UAE have both used their systems in conflict, with Azerbaijan deploying the TRG-300 (along with TRG-230 guided rockets) against Armenian hardened positions and other targets deep behind enemy lines during the 2020 Nagorno-Karabakh War, and the UAE deploying its systems in Yemen during the Saudi-led intervention in that country. Similar Bangladesh’s TRG-300s, a KamAZ-63502 8×8 truck serves as the basis for Azerbaijan’s TRG-300s. The UAE opted for a different approach entirely, mating the TRG-300 rockets to the massive Jobaria MRL instead, which can carry up to 16 TRG-300 rockets.

The acquisition of the TRG-300 represents the first step by Bangladesh in building up long range fire capabilities for its armed forces. The modularity of the launcher also enables the use of TRLG-122 and TRLG-230 guided rockets without having to purchase additional systems, this making it an ideal choice for diversifying the range of targeting options on a budget. The potential synergy with UAVs during combat operations could further expand on these capabilities at little costs, while introducing reconnaissance abilities that are paramount to a well-functioning military. If rumours of a tentative second TRG-300 regiment (for another 18 launchers) are true, the Bangladeshi military’s prospects of achieving the Forces Goal 2030 are rapidly becoming better and better indeed.