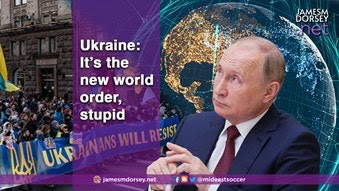 Ukraine is about much more than the security of one sovereign nation. The battle for Ukraine is a battle for the new world order.

In that battle, Russian President Vladimir Putin is living up to the worst expectations of Western policymakers and analysts. Unlike Chinese President Xi Jinping, Mr. Putin is seeking to overthrow the current world order, at least as far Europe and the continent’s security architecture is concerned.

By contrast, Mr. Xi would prefer to ensure China’s place in the existing world order, enhanced with what he would call Chinese characteristics. But, in doing so, Mr. Xi dangerously blurs the lines between maintaining and fundamentally altering the current world order.

What Messrs. Putin and Xi have in common and share with a critical mass of other world leaders, including India’s Narendra Modi, Turkey’s Recep Tayyip Erdogan, Hungary’s Victor Orban, and former US President Donald J. Trump, is that they think in civilisational rather than national terms. In doing so, they define their nation’s borders in civilisational instead of internationally recognized legal terms.

That is what Mr. Putin was talking about when he this week, slumped in a chair with a seemingly bored expression on his face, spoke for 90 minutes, during which he announced Russian recognition of two breakaway Ukrainian republics. Mr. Putin’s version of history was designed to justify Russian and Russian-backed infringements on Ukrainian territory and define the civilisational borders of what he calls the Russian world. The boundaries of that world are defined by the presence of Russian speakers and/or adherents to Russian culture on any given territory.

That is the backdrop to Mr. Putin’s suggestion that none of the states that emerged from the collapse of the Soviet Union — except for Russia—were real countries and that Ukraine had no tradition of genuine statehood. Much like Saddam Hussein’s justification of the 1990 Iraqi invasion of Kuwait, Mr. Putin’s reasoning would deny legitimacy to most states in Europe and beyond. The same is true for Mr. Xi’s claims to the South China Sea or efforts to control the ethnic Chinese Diaspora.

That matters little to Mr. Putin and other civilisationalist leaders whose world is one in which might is right.

Russian recognition in 2008 of two breakaway republics in Georgia, the annexation of Crimea in 2014, and fostering of secessionist insurgents in the Donetsk and Luhansk regions of Ukraine, and the temporary-turned permanent presence of a significant number of Russian troops in Belarus prove the point.

What has gone unnoticed is that since 2014 Mr. Putin has talked about Kazakhstan in terms of the same denial of a national history that he employs when he speaks about Ukraine. Weeks before Russian troops intervened early this year in Kazakhstan to squash mass anti-government protests and then quickly withdrew, Mr. Putin used an unrelated question posed by Kazakhstan TV to remind his audience that “Kazakhstan is a Russian-speaking country in the full sense of the word.”

Dmitry Peskov, Mr. Putin’s spokesman, hit the nail on the head when he recently noted that the Russian President’s autocratic domestic and foreign policies were just “the starting point.”

Mr. Peskov’s suggestion that “there’s a demand in the world for special, sovereign leaders, for decisive ones” spoke to the fact that Mr. Putin has become a model for a class of world leaders that no longer finds it necessary to pay lip service to the rule of law. For these leaders, land grabs, military threats, destabilisation, disinformation, and assassinating one’s opponents are the game’s new rules.

Mr. Putin’s notion of the centrality of Ukraine for securing its place on the world stage has a long pedigree in militant Russian nationalism. It’s a notion that was acknowledged by senior US officials already decades ago. President Jimmy Carter’s Polish-born national security advisor Zbigniew Brzezinski noted in the 1990s that “without Ukraine, Russia ceases to be an empire, but with Ukraine suborned and then subordinated, Russia automatically becomes an empire.”

What happens next in pursuit of Mr. Putin’s goal is anyone’s guess. However, his recognition of the breakaway republics implies that, despite having parliamentary authority to move troops at will across Russian borders, a full-scale invasion of Ukraine may be unlikely.

A retired US general suggested on the sidelines of last week’s Munich Security Conference that Russia could “invest” the Ukrainian capital of Kyiv. The general was not speaking about financial investment; he was reverting to the term’s meaning to describe the siege of a city rather than its occupation that went out of fashion once the Cold War ended.

Despite assertions to the contrary, Mr. Putin is not irrational and on the rampage. On the contrary, he is a brinksman who has proven to be a brilliant tactician. He knows that his demand that NATO withdraws from Eastern Europe and promise to bar Ukraine from EU and NATO membership is unrealistic.

With the recognition of the breakaway Ukrainian republics, he has demonstrated that he’s not worried about US and European sanctions. Russia has amassed some US$600 billion in reserves and reduced to 50% the amount of trade conducted in dollars.

As a result, Mr. Putin, so far, can look at his sparking and manipulation of the Ukraine crisis as a success despite much of the world condemning Russia, as was evident in the United Nations Security Council debate and the caution with which China commented on the crisis. Beyond sending a chilling message to republics across the former Soviet Union, Mr. Putin has exposed weaknesses of the West at a time that liberal democracy is in crisis and under attack from illiberal and undemocratic elements on both the left and the right, some of which enjoy Russian empathy at the least.

To be sure, Mr. Putin may have given NATO and Western solidarity a new lease on life, but the United States and Europe have yet to prove that they are up for the challenge. They have not developed an approach that acknowledges that the Russian leader is playing a long game despite assessing him as a tactician rather than a strategist.

Sanctions are unlikely to project the United States and Europe as capable of preventing Mr. Putin from establishing his new world order in the former Soviet Union or in lands where he could artificially create outposts of the Russian world by supporting Russian-language education as he is trying to do in the Central African Republic.

Sanctions, no matter how painful, have so far proven to be ineffective in forcing policy, if not regime change. Take, for example, Iran. So far, harsh sanctions have not forced the Islamic republic onto its knees, and Russia is better positioned to absorb the impact of punitive penalties.

Add to this that Mr. Putin could be dealing with a different United States by the end of this year if US President Joe Biden were to lose the Senate and/or the House of Representatives in mid-term elections. Similarly, Mr. Putin could be dealing with a more empathetic French leader if President Emmanuel Macron fails to fend off his far-right challengers in April elections.

Mr. Putin’s long game, says journalist and author Anne Applebaum, is for Ukrainian democracy to fail. That, he hopes, would, in turn, contribute to America’s failure and ensure that its democratic rhetoric rings hollow.

“These are big goals, and they might not be achievable. But Putin’s beloved Soviet Union also had big, unachievable goals. Lenin, Stalin, and their successors wanted to create an international revolution, to subjugate the entire world to the Soviet dictatorship of the proletariat. Ultimately, they failed—but they did a lot of damage while trying. Putin will also fail, but he too can do a lot of damage while trying. And not only in Ukraine,” Ms.  Applebaum said.