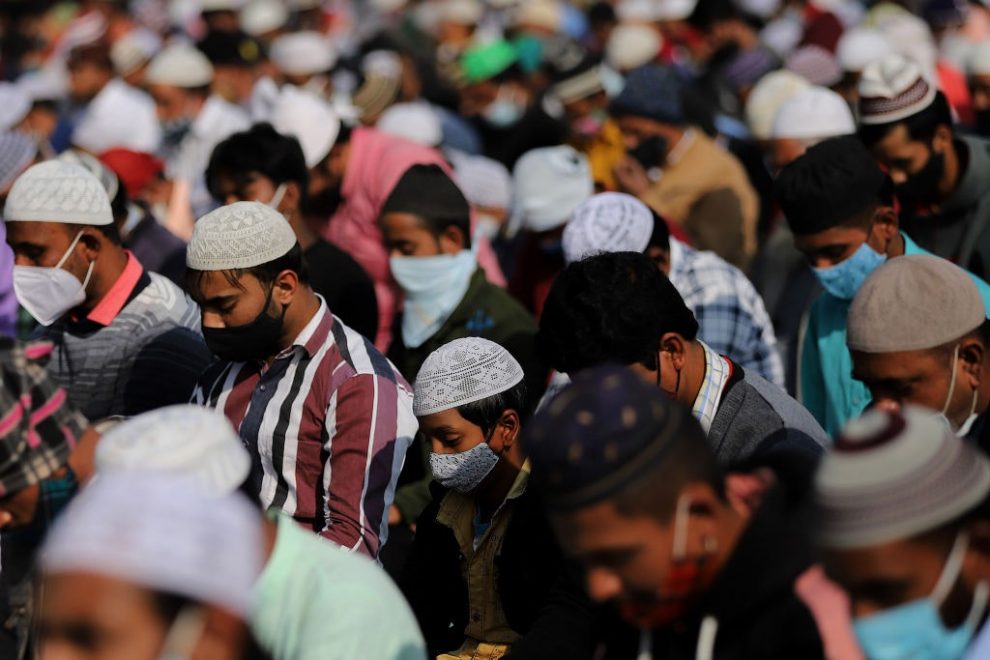 Gurugram, an hour outside New Delhi in Haryana, is nothing if not metropolitan, filled with high-rise glass buildings, massive roads, a preponderance of suited/booted jobs, and a fast-paced, no-nonsense work environment. It’s easy to mistake the aesthetic for less tangible qualities: progressivism, secularism, and inclusivity. So when national headlines announced a series of coordinated attempts to stop Muslims from offering namaz—praying—in the public fields earmarked for their congregational prayers, many Indians were shocked.

But not the Muslims of Gurugram, especially those who regularly use these grounds for their Friday prayers. The organized intimidation was the culmination of a hate campaign successfully seeded and cultivated over the last three years. The ruling Bharatiya Janata Party (BJP) has seemed to watch in silence on some occasions; on others, its leaders have actively participated in a broader anti-Islam campaign.

On December 10, a Friday, hours after Muslims ended their weekly prayer, Haryana Chief Minister Manohar Lal Khattar, a key aide of Prime Minister Narendra Modi’s, announced that Muslims offering namaz in the public grounds of Gurugram “will no longer be tolerated.” These grounds were not only being used legally, but were in fact designated specifically for use by Muslim worshipers, authorised by the Haryana government. Khattar himself, a little over a month ago, had said publicly that everyone has a right to pray, as long as they don’t block road traffic.

But Muslim community members have endured a steady stream of abuse, finding cow dung carefully laid at one of their prayer grounds, hearing chants of ‘Jai Sri Ram’ (Glory to Lord Ram) yelled at Muslims at Friday worship, and watching Hindu nationalist groups conduct their own havan rituals and park their trucks at the prayer spots. Their prayers had been difficult; now they are impossible.

Over the last three months, the 37 public grounds had been the focus of unwanted attention. It began when a fringe right-wing group, Bharat Mata Vahini, held protests while Muslims gathered to pray in Gurugram’s Sector 47 public ground. Soon, the protests spread to prayer grounds across Gurugram in Hindu majority areas. In October,  Kulbushan Bhardwaj, leader of Sanyukt Hindu Sangharsh Samiti (SHSS)—a a newly formed coalition of 22 right-wing groups—denounced “namaz to spread Jihad in Gurugram,” or “Namaz Jihad.”

“We represent the voice of the Hindu community of Gurugram. The ordinary Hindu feels threatened by this Namaz Jihad’,” Bhardwaj told this reporter.  “Children used to play cricket on some of these grounds. So when they see Muslims praying there…it creates an environment of fear, of threat. Tomorrow if Hindus also start doing their prayers on the grounds, it will lead to confrontation. After all, every single day of the week is holy for Hindus. But we don’t just occupy the grounds.”

SHSS groups, sometimes separately, but often in unison, held protests at the Sector 12A ground in late October, where some of their members were arrested by local police.

Undaunted, the protestors returned the following week, and decided to up the ante by holding what they call a Govardhan Puja at the same site. Controversial ruling party leader Kapil Mishra, known for his inflammatory anti-Muslim speeches, was also present at the site, and in his speech invoked Shaheen Bagh (the protest against the Citizenship Amendment Act).

Soon after, cow dung cakes were carefully spread across the Muslim prayer ground in rows. The following Friday, anti-Muslim protestors reappeared at the spot, saying they intended to build a volleyball court at the site. No volleyball court was ever built, but for another Friday, Muslims in the area were stopped from practicing their faith, a liberty enshrined in the Indian constitution.

Successive attempts to keep Muslims out of the prayer grounds have been largely successful.

It should be noted that every single one of these 37 public grounds in Gurugram was being used with explicit permission from the district administration. The controversy began in 2018, when right wing groups attempted to obstruct the prayers of the Muslim community.

At the time, there were 108 grounds in Gurugram where Friday prayers could be offered publicly, but in a meeting between community leaders and with the district administration, the Muslims were urged to accept a much smaller number: 37. The Muslim representatives say they agreed to make do with the significant reduction for the sake of communal harmony, and to accommodate the Hindu majority. When the protestors came back in greater force in 2021, the Muslim representatives met with the authorities again. This time, permission to use eight of those thirty seven sites was rescinded. Instead of ensuring a safe place for Muslims to exercise their fundamental right, Muslims were asked to compromise still further. And again, they accommodated. But the agenda was complete subservience, and that was yet to come.

This agreement was ostensibly the outcome of some Imams and members of the Muslim Rashtriya Manch (the Muslim wing of the RSS) signing a memorandum of understanding, relinquishing the places where organized Hindu nationalist agitators had sought conflict. Other Muslim representatives, however, rejected the memorandum.

“Why should Muslims be occupying public grounds like this? Any practicing Muslim knows that prayer cannot be established like this, forcefully. So if Hindus have a problem with us occupying the grounds, we shouldn’t be praying there. It’s that simple,” Khurshid Rajaka of the Muslim Rashtriya Manch, who was present in the meeting, told this journalist.

The Muslim Rashtriya Manch is the Muslim outreach group of the Rashtriya Swayamsevak Sangh (RSS).The ideological parent of the BJP, the RSS is a Hindu nationalist group, often accused of targeting minorities, specifically Muslims, Christians and oppressed castes.

“Muslims should pray in mosques. That’s where we should have been praying in the first place,” Rajaka added.

Representatives of the Muslim community in Gurugram argue that the area’s 13 functional mosques are too few to accommodate the local population—even now, they pray in multiple shifts every Friday.

“There are just 2 mosques in New Gurugram, and 11 in old Gurugram,” Altaf Ahmad, member of the Muslim council representing the community in talks with the administration, told this reporter. “For the vast majority of working-class Muslims, they cannot afford to travel several kilometers in their short lunch break to find a mosque, pray, and come back on time. Of course we would love to pray in mosques, but there are hardly any mosques in the city to accommodate the people.”

The Waqf board, one of the richest statutory bodies in India, is in charge of lands meant for Islamic sites of worship. It says that it doesn’t own any land around the areas in Gurugram where there is a dearth of mosques and prayer grounds, and so it cannot establish new ones where they are needed. But some of the most expensive structures in India are built on land illegally acquired from the Waqf. Originally, it belonged to patrons in the Muslim community. Now, much of the land is owned by industrialists or residential landlords.

“We have land in Old Gurugram and have mosques there too,” Jamaluddin Khan, the Gurugram Waqf board officer told this reporter. “It is New Gurugram which needs places of worship for Muslims. But the Waqf board doesn’t have much land there. There is some land that the Waqf board has in rural belts of Gurugram, but it is either in a very dilapidated state, or has been encroached.”

The encroachment of Waqf-owned land by builders of commercial complexes and housing properties is a well-documented phenomenon. “Encroachment cases take years to be fought and won, if at all. They all take time in accordance with the due process of law,” Khan said.

All the attempts to disrupt prayers have met with resistance from the Muslim community. The Gurugram Ekta Manch, a secular front made up of city residents belonging to various faiths, has taken the lead in questioning this diminishing number of Muslims prayer grounds.

Altaf Ahmad, who is also a co-founder of this group, said he has spent 15 years in Gurugram, but never faced this kind of “hate.”

“Being a Muslim, of course you hear things every now and then. But the kind of hate that is evident now, wasn’t the case earlier. Growing up, I would see my father’s colleagues come to our home for Eid, we would all share the same festive sentiment,” he said.

“I wouldn’t even use the word ‘tolerance’, because you only tolerate things you dislike. I never sensed that dislike or animosity from any community earlier. Now it is blatant and brazen. Only hate can cause you to stop someone from praying,” he added.

Ahmad has been the one of the most vocal presences in the Ekta Manch, and is also hoping to convince the district authorities that the community needs to keep the grounds they have.

“I know that I might be troubled now because I have been so vocal. Of course it’s scary. My family is worried for me. But if I don’t speak up on something as basic as our right to pray, then what happens next? Prayer is a fundamental pillar of Islam. It’s a right guaranteed to us by the Constitution,” he says.

To Altaf’s mind, the ‘solution’ to the problem won’t come until other non-Muslims also speak up—”the silent majority”, as he calls them.

Altaf says he knows many residents of Gurugram who support him and are happy to speak out against those trying to disrupt Muslim prayers—but only in private. “They don’t want to take a stand in public. Because they too are scared over what they could be put through if they come out in the open in defense of the Muslims,” he said.

On 12 November, as right-wing groups continued to disrupt prayers at grounds throughout Gurugram, 40-year-old Akshay Yadav, who runs a wildlife tourism business in Gurugram’s Sector 12 offered the keys to his shop so that Muslims could come inside and pray.

Inspired by Yadav’s gesture, a gurdwara committee in Gurugram, overseeing several Sikh gurdwaras—houses of worship—offered their premises to Muslims for their Friday prayers.

“See, this is exactly what they do. They intimidate people who are secular, that’s why it’s difficult for people to be more vocal,” Ahmad said.