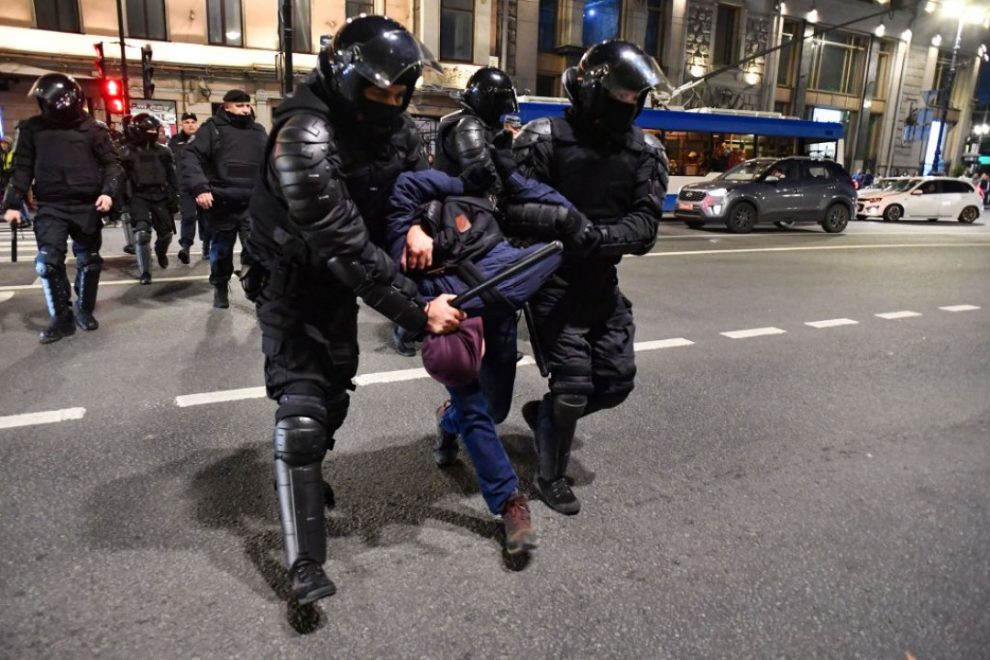 Five days into President Vladimir Putin’s attempt to mobilize Russians to fight against Ukraine, over 260,000 Russian men had fled the country, according to Novaya Gazeta.

Russian media outlet The Bell reported that some men are now being denied exit at airports and border crossings.

Meanwhile, at least 11 military enlistment offices have been set on fire in Russia since Putin’s mobilization announcement on Sept. 21, according to Meduza media outlet.

Despite troubles at home, Russia continues to conduct sham referendums in four occupied regions at gunpoint. Ukraine warns that Moscow plans to mobilize Ukrainian men to fight against their own country.

The Ukrainian Defense Ministry’s Intelligence Directorate reported that the Russian police have set up checkpoints to restrict military-age men from leaving the country’s southern Krasnodar Krai.

Tens of thousands have been drafted, and some have already arrived at military bases, the U.K. Defense Ministry said. Ukraine expects Russia’s newly-mobilized servicemen to be sent to the front line within six weeks, according to the Financial Times.

On Sept. 25, Mykhailo Podolyak, an advisor to the President’s Office, said that Russia was committing genocide by drafting Crimean Tatars to fight against Ukraine.

Forcing Crimean Tatars to fight against Ukraine “is nothing more than Moscow’s attempt to cleanse the territory of a disloyal population,” Podolyak tweeted.

Russian forces continue to conduct sham “referendums” in occupied regions of Ukraine. They also are planning to force Ukrainians to fight against their own country.

In Zaporizhzhia Oblast, Russian troops are set to mobilize 3,000 Ukrainian men in the occupied city of Melitopol by Oct. 10, according to Mayor Ivan Federov. He said that Moscow’s main goal was to mobilize more people.

Furthermore, Luhansk Oblast Governor Serhiy Haidai said on TV that Russia plans on forcibly mobilizing all local military-age men by restricting people’s movement. According to him, Russian troops at gunpoint are forcing residents to vote even if they don’t have their passports.

Russia continues to use the Iranian combat drones, Shahed-136, Southern Operational Command’s spokeswoman Natalia Humeniuk said. She added that there is likely a specific height at which these types of drones can be shot down, but it needs to be further studied.

In eastern Donetsk Oblast, Russian forces continuously fire upon the front line, but their attacks near eight settlements were repelled on Sept. 26, according to Ukraine’s General Staff.

In a recently liberated area of Kharkiv Oblast, a Russian airstrike killed several people, including a 15-year-old, according to the State Emergency Services.

The Security Service has also found another Russian “torture chamber” in the region’s liberated village of Lyptsi, 30 kilometers north of Kharkiv.

In Donetsk Oblast, three people were killed in Avdiivka and Bakhmut, and 11 others were wounded across the region on Sept. 25, Governor Pavlo Kyrylenko reported.

In Dnipropetrovsk Oblast, Governor Valentyn Reznichenko said that almost 3,000 households in the city of Nikopol were cut off from electricity again after a night of heavy shelling in the area.

This was not Europe’s war, but now it is going to be
US is shooting itself in the foot by militarizing Greek islands