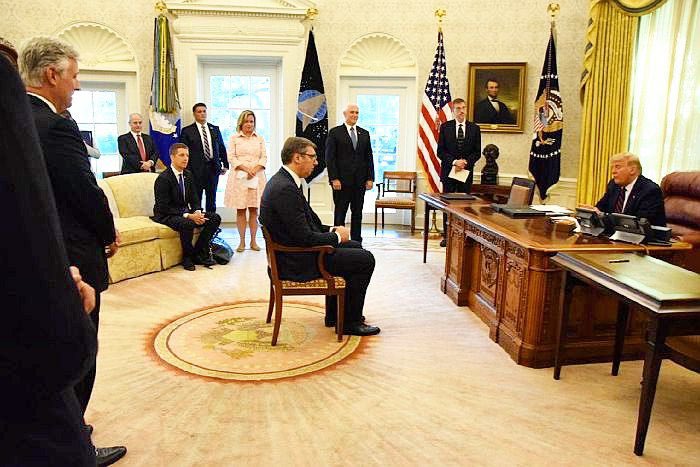 50 years old Aleksander Vucic has been an uncontested politician in Serbia for over a decade. After serving as a minister of defense and deputy prime minister, between 2012 abd 2014, he became the prime minister of Serbia. He won two consecutive early elections as a prime minister and pushed the serving president Tomislav Nikolic aside to claim the top state seat in 2017. The story of the humiliating Oval Office incident actually started then when Vucic wanted to keep in charge by acting as a shadow prime minister and change the political system later.

During Vucic’s presidential election campaign in 2017, an advertisement circulated on Serbian tv’s which showed a passenger air plane, pilots of which were fighting over who should fly the plane. While the aircraft wobbled in the air as a result of pilots’ fight, passengers were terrified. Then Aleksander Vucic appeared on the screen apparently as one of the passengers on the free-falling airplane and said states are just like airplanes, if there is more than one person in charge, they would crash. Vucic reportedly signaled a Turkey-style system change by this commercial to turn the presidency into the head of the execution. He won the presidential election by receiving 55 percent of the votes, staggering 40 percent ahead of his closest rival. He may have seemed domestically strong enough to manage a such radical political change, but attempting to stay in power longer would involve global establishment.

Shocking the entire country, Vucic appointed Ana Brnabic, an LGBT politician with little experience to be able act as a shadow prime minister. But he would soon have to start facing challenges to his rule. First protests against Vucic was disguised in environmental concerns. Thousands of people hit the streets of Belgrade to protest a real estate development project in the heart of the city. Soon after he was elected, Vucic also dealt with large protests “against the dictatorship.” The last one and the most violent one was recently about a weekend curfew decision of the government. Once a powerful politician, Vucic could not manage to implement the curfew decision to stem the novel coronavirus.

Aleksander Vucic’s close ties to racist Cetnic ideology has been seen one of the important reasons that turned him into a strong politician for over a decade. He has a video on Youtube from 1992, right before the civil war erupted in Bosnia, saying they (Serbs) should murder 100 Muslims for every Serb killed. He was never pressured for his Cetnic past by the western media and the establishment. As a matter of fact, everyone in Sarajevo knows that Vucic fired on civilians as a sniper from the mountains surrounding Sarajevo during Bosnian war. However, as soon as the 50 years old veteran politician attempted to defy the global political rules, like Putin and Erdogan, he was called a dictator and faced violent street protests.

On Saturday, Vucic was in Washington with his Kosovan counterpart signing an agreement with the Trump administration. A viral video showed Vucic being surprised and looking at his aids when Trump announced that Serbia agreed to move its embassy to Jerusalem. Presidents do not sit down and read every single clause on an agreement. That is a job for advisers and senior aids. It is certain that Vucic has been sold out by one or more persons in his senior team. And certainly a message to Vucic that he could easily be played when needed. Vucic was humiliated in Oval Office. This humiliation has dealt a pathetic blow to his image which would be impossible to recover from domestically.