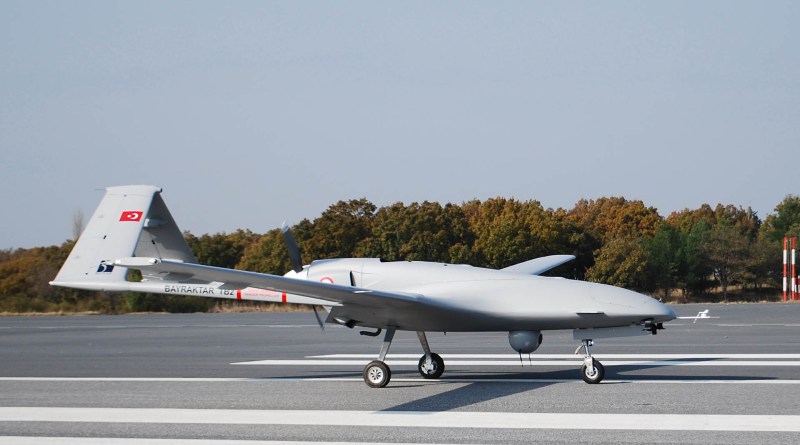 Military analysis circles have lately been abuzz with speculation suggesting that Bulgaria is eying the acquisition of at least six Bayraktar TB2 unmanned combat aerial vehicles (UCAVs) from Turkey. If this procurement goes through, it would reintroduce capabilities long lost to Bulgaria and simultaneously add to a rapidly growing list of countries interested in acquiring the TB2 or currently already in the process of doing so. Bulgaria is said to have kickstarted its attempt at purchasing TB2s in 2020, but postponed the decision because of the COVID-19 pandemic. [1] If the TB2 does eventually arrive to Bulgaria, it will be the second country (or third pending Latvia’s acquisition) in the European Union to purchase the system after Poland acquired 24 TB2s in May 2021.
The Central and Eastern European interest in the Bayraktar TB2 is undoubtedly a result of its repeated successes over Libya, Syria and more recently Nagorno-Karabakh. Another obvious factor at play is the system’s low initial price and operating costs, which actually for the first time makes the cost-benefit analysis of operating modern U(C)AVs a favourable one to countries like Bulgaria, with contemporary systems such as the MQ-9B Reaper simply being too expensive. The fact that the TB2 can be bought from a fellow NATO member will surely also be appreciated, providing an additional degree of security as well as a guarantee of quality that might be lacking from other providers.
It is little known that Bulgaria once operated a significant fleet of reconnaisance aircraft that at one point even included a number of MiG-25RBT ‘Foxbats’. Bulgaria was the only Warsaw Pact country to operate the mighty Foxbat, the highly specialised nature of which and prohibitive operating costs were apparently enough to dissuade all other Warsaw Pact members from acquiring the aircraft. Bulgaria itself would only purchase four MiG-25s, which likely did little to improve the operations and maintenance costs per unit while they were in operational service.
Presumably for this reason, but also the drastically changed post-cold war security climate, the remaining MiG-25s were retired already within ten years of entering service and exchanged for five MiG-23MLD fighter-aircraft with Russia in 1991. Although this marked the end of ‘Foxbat’ operations in Bulgaria, Ukraine would continue to operate its MiG-25PD(S) interceptors and MiG-25RBTs until 1996 while Russia only retired its last MiG-25RB(T)s in November 2013, some 50 years after the type first entered service.
Two decades earlier, in November 1982, three MiG-25RBTs (serials: 731, 736 and 754) and a single MiG-25RU two-seat conversion trainer (serial: 51) arrived at Dobrich Air Base in northeastern Bulgaria. The aircraft subsequently entered service with the 26th Reconnaissance Air Regiment for photo reconnaissance and electronic signals intelligence (ELINT) duties. Tragedy struck on the 12th of April 1984 when a MiG-25RBT was lost after running out of fuel in bad weather, forcing the pilot to eject. Luckily the pilot was unharmed, and this would be the only loss of a MiG-25 in Bulgarian service. In May 1991, the three remaining aircraft roamed through Bulgarian airspace for the last time as they departed for an uncertain future in a crumbling USSR. After the dissolution of the Soviet Union, the aircraft were taken over by the Russian Air Force and flown from Lipetsk and later from Shatalovo, later even seeing action during the Chechen Wars. [2] 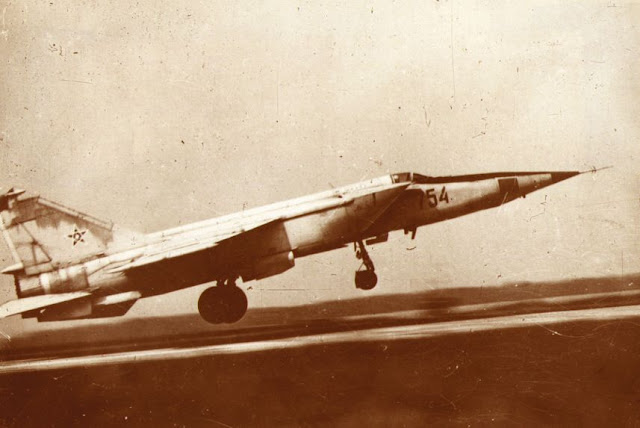 During the 1950s the 26th Reconnaissance Air Regiment was initially equipped with a hodgepodge of aircraft that weren’t particularly well-suited to the reconnaissance role, mostly comprising bomber aircraft that were flown in their original configuration. But in the decades that followed, the unit eventually grew out to become the best-equipped aerial reconnaissance unit in the Warsaw Pact.
In the course of the 1950s, it received fourteen Il-28R (and one Il-28U trainer) aircraft, supplemented by some twelve MiG-15bisR at the start of the 1960s. Though their service in Bulgaria wouldn’t be exceptionally longlasting, it bears mentioning that such aircraft have elsewhere weathered the ages and found use even in today’s day and age, with North Korea still maintaining them in operational condition. [3]
The Il-28Rs and MiG-15bisRs were later supplemented and replaced by MiG-21R combat-capable reconnaissance aircraft and MiG-21MFs modified for the same role. The 1980s would see the unit’s golden decade with the delivery of the MiG-25RBTs as well as Su-22M-4s. [4] [5] As the last remaining MiG-21R and MiG-21MF-R aircraft were retired from service, Dobrich Air Base closed its doors in 2002, followed by the retirement of the Su-22M-4s two years later. Since then, no dedicated reconnaissance aircraft are operated by the Bulgarian Air Force.

When equipped with multiple ejector racks (MERs), the reconnaissance-configured MiG-25RBT could be turned into a high-speed bomber armed with up to eight 500kg FAB-500Ts. There is no evidence to suggest Bulgaria ever received MERs for its MiG-25s or had any interest in deploying its aircraft as bombers in the first place however. [6] This was likely the case because of the terrible accuracy associated with using MiG-25s as bombers, which were originally supposed to deliver nuclear weapons only, so that accuracy wasn’t of too great importance.

The days of Bulgaria operating dedicated reconnaissance aircraft are long gone, with the air force struggling to maintain and eventually completely replace its other Soviet-era air assets like the MiG-29 and Su-25 with more modern Western aircraft. In this respect, a UCAV like the TB2 could present not only a valuable reconnaissance asset, but also form a cost-effective option to take over at least some the roles of the Su-25s and Mi-24s currently still in service, propelling Bulgaria into the age drone-powered warfare at a price more compatible with its current expenditures.
Whether an acquisition ultimately materialises or not, the odds that Baykar’s TB2 has seen its last sale in the European Union are slim indeed. In fact, current interest in the type seems to indicate a virtual wave of exports spanning more than just the European subcontinent is at hand. At present, Bulgaria could well be among the first EU nations to ride this wave, ensuring the continuation of its rich history of operating reconnaissance aircraft.
[1] Avrupa sıraya girdi! Yunanistan’dan Türkiye itirafı https://ekonomi.haber7.com/ekonomi/haber/3057811-avrupa-siraya-girdi-yunanistandan-turkiye-itirafi
[2] МиГ-25 в България https://www.pan.bg/view_article-30-8605-MiG-25-v-Bylgariq.html
[3] North Korea’s Armed Forces: On the Path of Songun https://www.helion.co.uk/military-history-books/the-armed-forces-of-north-korea-on-the-path-of-songun.php
[4] Bulgarian Air Defence and Air Force’s Tactical Air Units in January 1, 1983 http://www.easternorbat.com/html/bulgarian_tactical_air_force_8.html
[5] Bulgarian Air Defence and Air Force’s Tactical Air Units in January 1, 1988 http://www.easternorbat.com/html/bulgarian_tactical_air_force_81.html
[6] http://airgroup2000.com/forum/viewtopic.php?t=4985
Source: https://www.oryxspioenkop.com/2020/01/bulgaria-mig-25.html