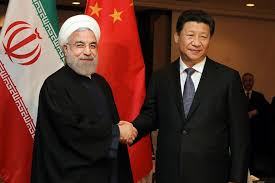 Here are two potential indicators of Chinese interest in moving ahead with a proposed US$400 billion economic and military cooperation agreement with Iran: a Chinese push for Iranian membership in the Shanghai Cooperation Organization (SCO) and renewed interest in a China-Pakistan-Iran-Turkey energy pipeline. China has moved on neither.

While converting Iran’s SCO observer status into membership would primarily signal Chinese interest in substantially increasing its engagement with the Islamic republic, moving ahead with the pipeline could be a geopolitical game changer.

China’s refusal to signal interest in putting flesh on the skeleton of its partnership with Iran following the leaking of a purported, wide-ranging agreement between the two countries suggests that the People’s Republic neither wants to increase tension with the United States by blatantly violating harsh US sanctions against the Islamic republic nor does it wish to upset its balancing of relations with Tehran’s regional rival, Saudi Arabia.

The pipeline that would cater to the energy, economic and security needs of all participants may be on the backburner for now, but geo-politicking in the Middle East and South Asia is likely to spur a renewed Pakistani, Iranian and Turkish push for the project.

Driving a potential push are shifting sands that raise the spectre of geopolitical realignment. They include a rift between Pakistan and Saudi Arabia over the lack of Gulf support for Islamabad in its conflict with India over Kashmir; calls for India to align itself with the Saudi-United Arab Emirates-led alliance against Turkey, Qatar, and Iran; and ambitions of Turkey, embroiled in multiple conflicts in the Mediterranean, to position itself as an energy transit hub.

The pipeline was first touted in 2015 in anticipation of the lifting/and or easing of US and United Nations sanctions against Iran as a result of an international agreement that curbed the Islamic republic’s nuclear programme.

Funded by China, construction that was slated to incorporate an already partially built link between Iran and Pakistan, was to be carried out by a subsidiary of state-owned China National Petroleum Corporation.

The United States’ withdrawal in 2018 from the nuclear agreement and reimposition of sanctions put the pipeline project on ice with neither Pakistan nor China wanting to be in violation of US law.

But Pakistan and Iran, in a first step aimed at reviving the project, agreed last year that the Islamic republic that completed its section of the link between the two countries would withdraw from arbitration procedures that would have likely forced Pakistan to pay a penalty for not living up to its part of the deal. Under the agreement, Pakistan has to complete its leg of the pipeline by 2024.

Chinese scholars Fei-fei Guo, Cheng-feng Huang, and Xiao-ling Wua concluded in a detailed study that “China urgently needs to open up new energy channels to reduce the reliance on the Malacca Strait,” a chokepoint in Southeast Asia that China fears could become a stranglehold in a confrontation with the United States.

The scholars went on to note that “the energy corridor is in line with the energy strategic objectives of China, Pakistan, Iran, and Turkey,” but cautioned that regional conflicts, including in Pakistan’s Balochistan province as well as in south-eastern Turkey and in Iran posed threats.

A Chinese Communist party newspaper, in a rare comment on possible greater engagement with Iran, suggested in July in an oped written by Middle East scholar Fan Hongda that there could be a point in the downward spiral of US-Chinese relations at which China would no longer regard the potential cost of violating US sanctions as too high.

A “factor that cannot be ignored regarding the improvement of Sino-Iranian relations is that China is less and less constrained by US factors when considering its diplomacy with Iran,” Mr. Fan said.

China is not there yet but the Middle East and South Asia’s shifting sands are lending urgency to the project from Turkey, Pakistan, and Iran’s perspective.

Pakistan initially signalled last December its interest in aligning itself with Turkey, Qatar and Iran by agreeing to participate in an Islamic summit in the Malaysian capital of Kuala Lumpur convened to challenge Saudi leadership of the Muslim world.

Complaining about lack of support of the Saudi-dominated Organization of Islamic Cooperation (OIC) that groups 57 Muslim-majority nations for Pakistan in its conflict with India over Kashmir, Foreign Minister Shah Mahmood Qureishi suggested that his country would seek to rally support beyond the realm of the kingdom.

The spat, coupled with Turkish support for Kashmir, much to the chagrin of India, has opened the door to South Asian nations potentially lining up on different sides of the Middle East’s fault lines at a time that China and India are at loggerheads.

The potential line-up and Chinese-Indian tensions are likely to be insufficient for Beijing to divert for now from its Saudi-Iranian balancing act.

Ultimately, that keeps the China-Pakistan-Iran-Turkey corridor on ice but does not take it off the table.

However, greater South Asian alignment with rivalling Middle Eastern states constitutes one more incentive for China to step up its subtle efforts to persuade Middle Eastern states, particularly Saudi Arabia and Iran, to dial down regional tensions and seek arrangements to manage their differences in a way that prevents them from spinning out of control.

The stakes for China are high given that it is investing up to US$62 billion in Pakistan, the People’s Republic’s single largest country investment related to its Belt and Road Initiative that seeks to tie Eurasia to Beijing through transport, energy, and telecommunications infrastructure.

Nonetheless, Daniel S. Markey, author of a recent book on China’s Western Horizon, cautions that “we should not underestimate the extent to which…China remains relatively conflict-averse and conservative, reluctant to throw itself into potentially costly situations…”

At the rate at which Middle Eastern and South Asian sands are shifting, that could prove to be increasingly difficult.