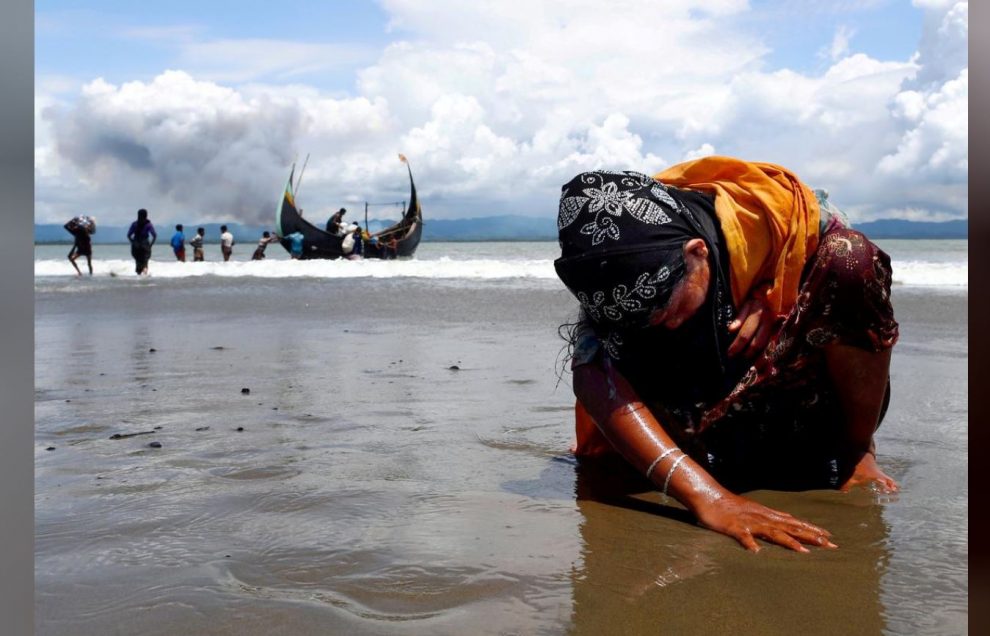 In a landmark development against Myanmar, two of its soldiers have reportedly confessed to war crimes against ethnic Rohingya community.

Fortify Rights, a Thailand-based human rights defender group, claimed on Tuesday that two Myanmar Army soldiers have “confessed to their involvement in massacres, rape, and other crimes against Rohingya in Myanmar.

“Fortify Rights has reason to believe Myanmar Army Private Myo Win Tun, 33, and Private Zaw Naing Tun, 30, are in the custody of the ICC and in The Hague,” the rights group claimed.

The Rohingya, described by the UN as the world’s most persecuted people, have faced heightened fears of attack since dozens were killed in communal violence in 2012.

In a fresh crackdown launched in August 2017, Myanmar’s military carried out genocide and rape, and burned houses in Rohingya villages, according to various rights group.

More than 850,000 Rohingya, a persecuted Muslim minority in Myanmar, have fled to neighboring Bangladesh since 2016 fearing for their lives.

In November 2019, the West African nation of Gambia mounted a legal battle against Myanmar (earlier known as Burma) at the International Court of Justice (ICJ) for her genocide of the Rohingya community who are mostly Muslims.

In January this year, In January, the ICJ – UN’s court — issued a provisional order asking Myanmar to implement certain preventive measures against the genocide of the Rohingya community in Myanmar’s western Rakhine state.

However, Myanmar has denied genocide but accepted that her military had committed war crimes on the Rohingya.

The ICJ and the ICC are both based in The Hague, which is a city on the North Sea coast of the western Netherlands.

On confession of the Burmese soldiers, Matthew Smith, Chief Executive Officer at Fortify Rights, said: “This is a monumental moment for Rohingya and the people of Myanmar in their ongoing struggle for justice.”

“These men could be the first perpetrators from Myanmar tried at the ICC, and the first insider witnesses in the custody of the court. We expect prompt action,” he added.

LIBs 565 and 353 were operational in Rakhine State during military-led so-called “clearance operations” against Rohingya civilians in 2016 and 2017.

The Fortify Rights said in the unpublished confessions, Myo Win Tun has described his involvement in killing Rohingya women, men, and children, and he has admitted to rape in Taung Bazar village and surrounding villages in Buthidaung Township in September 2017.

Zaw Naing Tun confessed to his involvement in killings, burying bodies in mass graves, and other crimes against Rohingya in five villages in Maungdaw Township during the Myanmar Army’s 2017 “clearance operations.”

“The soldiers provide the names and ranks of 19 direct perpetrators from the Myanmar Army, including themselves, as well as six senior commanders in the Myanmar Army whom they claim ordered or contributed to atrocity crimes against Rohingya, including a lieutenant colonel, a colonel, and three captains,” the rights group said.

“Based on these confessions alone, these two men may be directly responsible for killing up to 180 Rohingya civilians,” it added.

The Burmese soldiers have also described locations of mass graves.

According to Myo Win Tun, there is a mass grave of 30 bodies located on “Tower Tai Street,” which is reportedly located near the headquarters of LIB 552 and approximately six miles north of Maung Nu village—the site of a well-documented massacre.

The UN, human rights groups including Fortify Rights have previously identified these and other areas affected by the military-led “clearance operations” in 2016 and 2017.

“These confessions demonstrate what we’ve long known, which is that the Myanmar Army is a well-functioning national army operating with a specific and centralized command structure,” said Smith. “Commanders control, direct, and order their subordinates in all they do. In this case, commanders ordered foot soldiers to commit genocidal acts and exterminate Rohingya, and that’s exactly what they did.”

In a latest development at the ICJ, Canada and the Netherlands early this month said they want to intervene in the Rohingya genocide case against Myanmar.

“The Gambia’s application shows the discrimination and persecution of the Rohingya in Myanmar, which created the conditions for Myanmar’s security forces to perpetrate targeted and systemic atrocities against the Rohingya,” a joint statement by the two countries said.

Earlier, Maldives also expressed its support to Gambia at the ICJ.

Germany-based Ro Nay San Lwin, co-founder of Free Rohingya Coalition, told Straturka.com said the decision of Canada and the Netherlands has made the “case stronger” at the ICJ.

“This has proven that the Gambia is not alone. Over 140 countries have signed the Genocide Convention. Many other countries can join the Gambia. We want to see the world is united against the Genocide perpetrators,” he said.

“It is a call for all countries to fight for justice,” said Lwin. “Other oppressed communities across the world must push the world for justice. The move by these countries is a hope for all. Continuously pushing will change something. No one should give up for any cause.”

He urged international solidarity with the oppressed minorities.

“Justice is the most priority for all oppressed people across the world. No one will have peace without justice,” he added.

Two men believed to be deserters from Myanmar's army are in the custody of the International Criminal Court at The Hague after reporting their participation, under military orders, in the 2017 campaign of killing and rape of countless #Rohingya civilians.https://t.co/ducSq5I9hj

Founding Chairman of Burmese Rohingya Association North America (BRANA) Dr. Wakar Uddin told Straturka.com from Pennsylvania said the support to Gambia at the ICJ “will give a significant thrust to the coalition building in the international community in support of the case”.

“In addition to what is already there, more countries will join now. That will mean the international pressure on Myanmar will be on the upswing. It may also have some impacts in the upcoming national election in Myanmar,” said Wakar, who is a professor at the Pennsylvania State University.

“The current NLD government went to the ICC and defended the country. That worked in favor of Aung San Suu Kyi where she picked up wider support from the public,” he explained.

“Now she might even get more public support in the election against the military’s USDP and it’s allied parties,” he said.