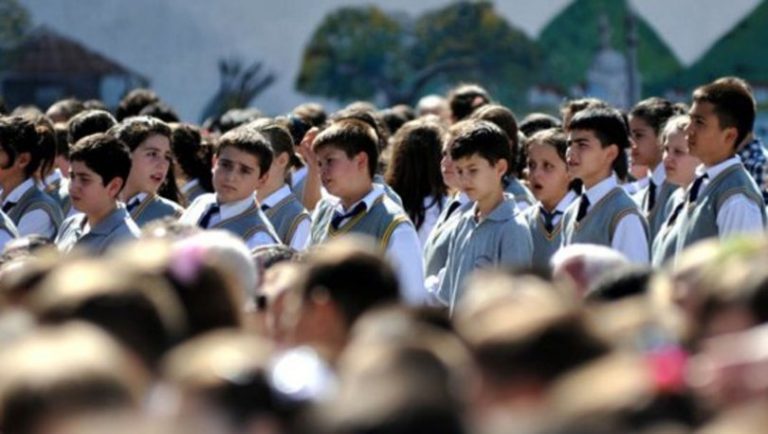 While critics find the student oath militaristic and authoritarian, supporters say constitutional Turkishness with ethnic identities have been confused.

For eight decades, primary and middle school students in Turkey had to start and end the school week by reciting an obligatory oath which has been criticized by many for being militaristic and authoritarian.

Introduced in 1933, the oath starts with “I am a Turk, honest, hardworking,” and ends with saying “How happy is the one who says ‘I am a Turk!'”

Turkish government abolished the practice in 2013 as part of the democratization package but a chamber of the State Council decided in 2018 that the justification for removing the student oath had not been sufficient following an appeal by a union.

A higher chamber of the State Council reportedly overturned that decision banning the oath for good.

Turkish president Recep Tayyip Erdogan has been in a loose but carefully-threaded alliance with the nationalist MHP who gave the harshest reaction to the initial ban 8 years ago. MHP leader Bahceli again chastised the court decision on Monday calling it a ticking bomb thrown into the schools.

Erdogan’s Ak Party who initially introduced the ban is still behind the decision despite repeated western media claims that Erdogan has been hostage to Bahceli’s nationalist policies to survive the alliance in order to win the much-anticipated 2023 presidential elections.

Other than MHP, Turkey’s ultra-secular CHP has also criticized the court decision while accusing Erdogan’s Ak Party for attempting to delete Turkey’s founder Mustafa Kemal Ataturk from the minds and hearts of Turks.

The Council of State decision to uphold the original ban have been hailed by Kurds and other minorities of Turkey. However, those who defend the oath say critics confuse constitutional Turkishness with ethnic identities. Similar constitutional identities exist in European countries like France and Germany despite including different ethnic groups.

The western media and pro-PKK party HDP, on the other hand, have been silent about the decision.

Turkish justice system has harshly been criticized by the western media for being under Erdogan’s control and oppressing Kurdish people. However, recent decision and its possible downward implications for president Erdogan have yet to find place in the western media.