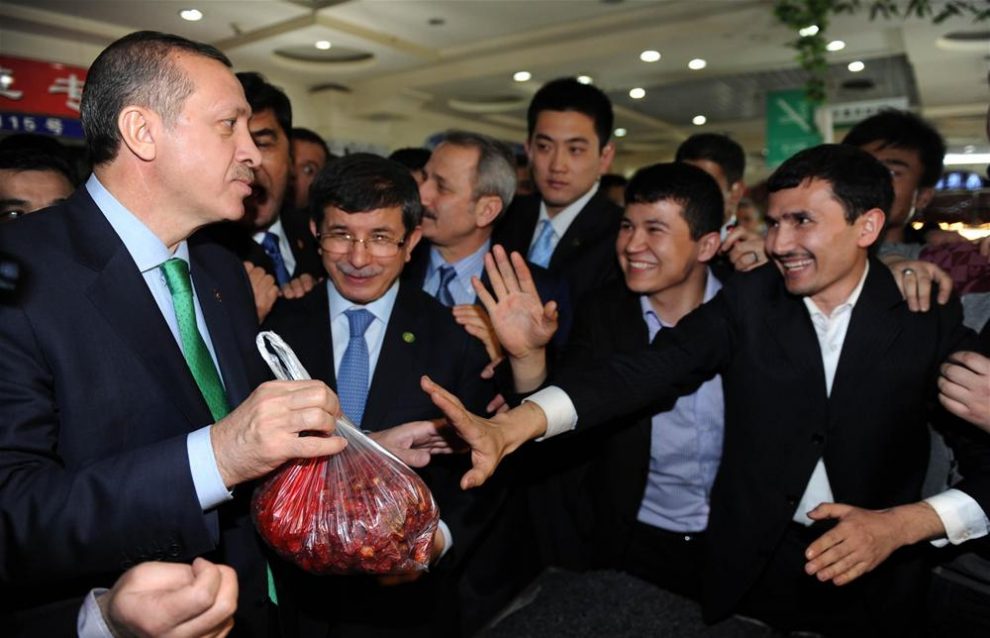 Former Turkish prime minister Ahmet Davutoglu called on football superstar Mesut Ozil who has been persecuted on and off the pitch for his fearless Uyghur defense to tell president Recep Tayyip Erdogan about “Uyghur issue.” He (Erdogan) would then maybe raise his voice about Uyghurs, Davutoglu said. “Shame on you, shame on you,” he continued while addressing a small crowd. However, former Turkish PM’s track record on Uyghur shows his current attitude is nothing but a hypocritical political turn.

Outgoing president Donald Trump administration decided on his last day that China has committed “genocide and crimes against humanity” in its repression of Uyghur Muslims. It was not the first time that a prominent leader called Chinese brutality on Uyghur a genocide. In 2009, after bloody crack down of Chinese regime in Urumqi, capital of East Turkestan (Xinjiang), Turkish then-prime minister Recep Tayyip Erdogan said Chinese treatment of Uyghur was a genocide. Turkey’s relations with China hit the rock bottom following Erdogan’s courageous remarks. Foreign minister Ahmet Davutoglu dubbed Henry Kissinger of Turkey, however, opted for a much softer reaction expressing concern about the developments in which 197 Uyghur were killed.

Davutoglu took the stage after Ankara’s relations with Beijing went south for Erdogan’s “genocide” remark to mend the ties. He called his Chinese counterpart Yang Jiechi to assure Beijing that Turkey is in line with Chinese regime’s policies. “We wont allow activities on Turkish soil which would harm sovereignty of China,” Davutoglu was reported saying to his Chinese counterpart over the phone. Two countries finally eliminated their differences with Davutoglu’s personal efforts and Chinese Prime Minister Wen Jaiabao visited Turkey following year to sign series of cooperation agreements one of which was pledging to fight against terror. An article on that agreement said “fighting anti-China separatist movements in Turkey.” This has all not just happened under Davutoglu’s watch but he was the orchestrator of the events and the agreement. Davutoglu later that year visited Urumqi where almost 200 people had been killed by Chinese regime. Turkish-Chinese relations were elevated to strategic partnership level after that visit.

Davutoglu became prime minister of Turkey in 2014 only to end up resigning from his post after tumultuous relations with president Erdogan. Despite several times stating that he would be part of Ak Party no matter what, he later resigned from Ak Party to pursue his political ambitions which turned him into an arch-rival of Erdogan.

The former Turkish PM took on a popular football subject on Thursday to score political goals against his former ally, Erdogan. Former player of Liverpol and German national team, Mesut Ozil has been transferred to Istanbul team, Fenerbahce. Ozil is known for his fearless stance on Uyghur people which cost him his European career, according to the sports experts. Ozil left the German national team after being crucified by German media for posing with Turkish president Erdogan. A Turkish columnist has even indicated that Erdogan might have a role in Ozil’s transfer to the Istanbul side. Davutoglu has also involved in the controversy by calling on Ozil to tell Erdogan about Uyghurs. But even when making the call which has been widely shared by Uyghur diaspora figures, Davutoglu refrained from using the word genocide. Davutoglu’s throughly tailored statement referred the Uyghur suffering as an “issue”.