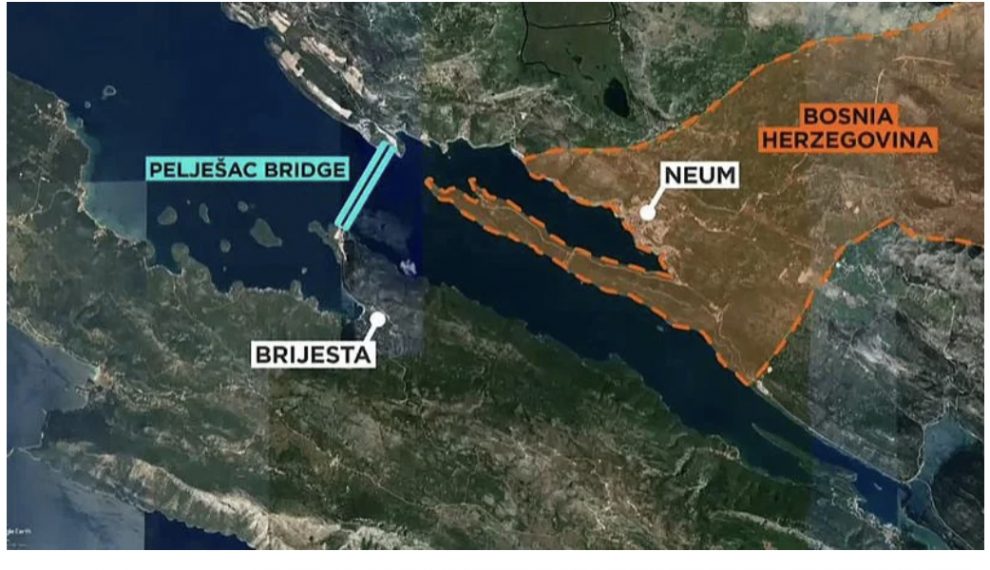 The European Union has allocated last year €357M for a Croatian bridge on the Adriatic coast after a decade-long halt. Peljesac Bridge ostensibly aims to unite Croatian mainland with Dubrovnik but it sends a message to non-EU member Balkan nations that the enlargement projections have been shelved thus pushing the rest of the Balkans into Russian influence sphere.

The €450 million euros project will provide uninterrupted commute between Croatian mainland and popular tourist destination Dubrovnik as travelers now have to cross borders passing through 20-km long Bosnia’s Adriatic shore line. However, the half a billion euros project would be rendred useless if and When aspiring Bosnia joins the EU and eventually the Schengen zone, reported Financial Times. “Peljesac bridge which will be the second longest bridge of Europe sends a clear message that enlargement is over. No one in their right mind would invest half a billion dollars in a “summer project”, which could go obsolete in a decade” says Samet Basaran, Sarajevo-based activist, referring the region’s summer-only potential.

Russia has already been very active in the non-EU Balkan nations like Montenegro, Macedonia, Albania along with Bosnia where Moscow blatantly undermines European interests. Pro-European governments have hard time hanging on the power especially in Macedonia and Montenegro. A disappointing message about enlargement projections sent by Pelsejac bridge would empower pro-Russian sentiments in the Balkans, according to the experts. “Increasing Russian influence in the Balkans deals a big blow not just to European interests but also those of NATO’s,” says Basaran.

After the current borders between Bosnia and Croatia had been carved up by the infamous Dayton Agreement in 1995, the two neighbors have never settled their maritime disputes. The 20-km-long shore line provides Bosnia maritime rights and building a bridge over disputed waters is simply violating not just international laws but also the regulations of Brussels itself.

Bosnia Herzegovina considers the project an assault on its sovereignty as it blocks Sarajevo’s only passage to the open waters. Former Bosniak member of presidency, Bakir Izzetbogovic has been preparing to take the issue to the international courts. Zeljko Komsic, a Bosnian Croat and a former member of the Presidency of Bosnia also lambasted on Zagreb saying “Croatia is directly violating Bosnian territorial integrity and sovereignty.” “It was simply unbelievable that a piece of our country is cut off before our eyes,” Komsic was quoted.

Some Bosniaks also considers the Peljesac bridge a cutting off attempt of Bosniaks from the rest of the world by those whom committed genocide and mass murders. Bosniak-majority entity within Bosnia has already been surrounded by Serbs and Croats on land. “The Peljesac bridge will turn Bosniaks into victims if a war breaks out again. We have no access to other nations,” said a Bosniak whom fought during 1992-1995 war and asked not to be named.