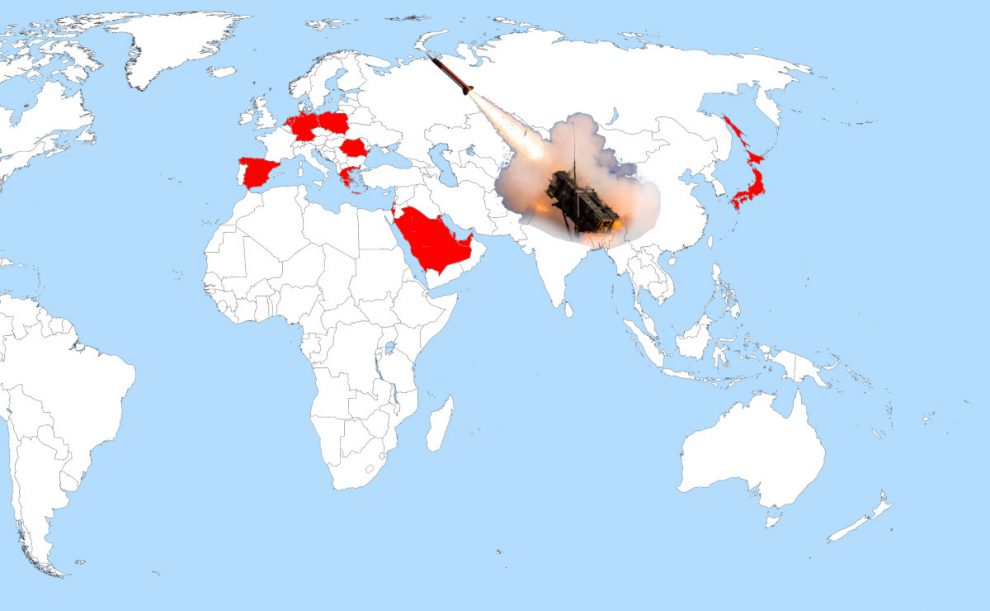 “Patriot” is not the actual name for the U.S. surface-to-air missiles; it is an acronym for the Phased Array Tracking Radar to Intercept on Target.

It might have been generated by a clever PR person working for U.S. defense contractor Raytheon. The missiles are deployed by the U.S. Army and several allied nations. The Netherlands, Poland, Germany, Japan, Israel, Saudi Arabia, Kuwait, Greece, Spain, the UAE, Qatar and Romania have them. Some EU countries deployed their own Patriots in Turkey during the Gulf War, but U.S. Congress never approved their sale to Turkey. The U.S. State Department offered a $3.5-billion Patriot missile sale to Turkey to be completed by the end of the last year, saying that it would increase “Turkish defensive capabilities, to guard against hostile aggression and shield NATO allies who might train and operate within its borders.” Yet, the department did not hear anything back from Congress until today.

The State Department says the Patriots are effective and top of their tier; but they know, we know and Israel knows that they are not up to scratch. Despite their deployment in their initial operational capacity in 1984, the original developers Raytheon, Hughes and RCA still keep the whole thing on the design table. The individual missiles may be as good as expected, but the “phased array” radar part of them “leaves many aspects to be desired,” and it fails as a system – meaning they must be deployed very close to enemy positions, or it is doomed to fail.

Not only that. Turkey wants to have its own students, experts and military involved in the development of any domestically used system, even the oil and gas transportation pipelines or nuclear power plants for energy. U.S. manufacturers have repeatedly turned down Turkey’s similar demands regarding the Patriots.

According to a classic Turkish idiom: If you burn your tongue with hot milk you puff out cold yogurt. Turkey has suffered enough from its allies’ arms embargoes, sales bans and other hostile behavior since the day it joined the Western alliance. Why do Westerners think the PKK terrorists’ head-count is now at an all-time-low? Why do you think the Turkish army does not have to delay its anti-terror campaigns while waiting for its unmanned aerial vehicles return from repair or service from Israel? Yes, you are right: Turkey is manufacturing them.

Now back to the Patriots.

“The U.S. Army has announced its intent to procure a limited number of Iron Dome weapon systems,” according to a U.S. Army spokesman for Army Futures Command, last week.

The U.S. Army made all its allies believe that the Patriots would remain in use until 2040. What happened? Isn’t the decision to acquire the Israeli missile defense system a significant shift from the dependence on the Patriots? U.S. taxpayers are already paying for the development of Israel’s Iron Dome missile defense system since the U.S. Defense Department partly owns them, but buying and deploying them is a totally different ball game. The State Department must have read the congressional report that Patriots could not intercept Saddam Hussein’s stovepipe Scud missiles more than 50 percent of the time. An investigation of the House Committee on Government Operations later concluded that the hit rate was not even 20 percent effective.

An unnamed high-ranking official of the State Department warned Turkey again that if Turkey purchases and deploys the Russian-made anti-aircraft weapon system, it would not receive NATO’s F-35 jet fighters. Turkey is involved in its development, and the major parts of the aircraft are being manufactured in Turkey. Yet, last August, U.S. President Donald Trump signed a defense bill that prohibited the delivery of 100 F-35 aircrafts to Turkey if it deploys S-400s. In other words, the Pentagon wants to hold the F-35s as ransom.

Could Trump or some “unnamed” high-ranking official please explain why Turkey should buy a defense system that even its own manufacturer wants to replace with Israeli missiles?