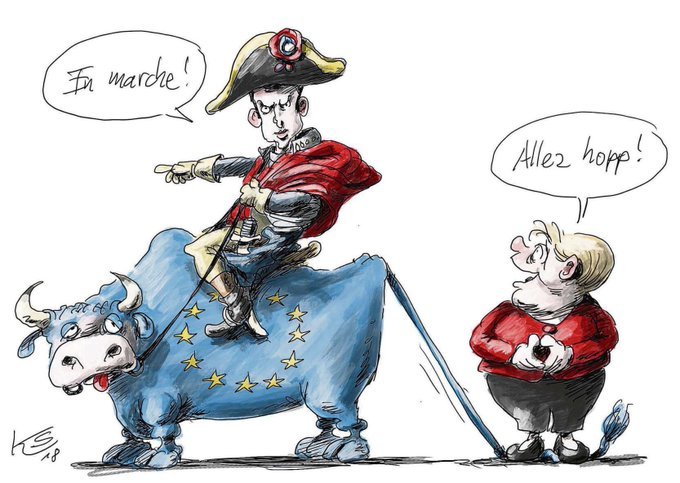 It is not just a coincidence that #EastMedIsTurkey (East Mediterranean Sea) is trending on social media beyond the borders of Turkey which is in middle of a battle with hegemonic France-led military tensions in the region.

It is an old habit of embattled France to poke its nose in internal and bilateral affairs of other countries. It is yet not so long that France is facing a backlash in Africa for her colonial past which saw miseries and poverty inflicted on the modest population of the continent.

Of course #Turkey has a point! No one in their right mind would take this ridiculous map seriously. A picture tells a thousand words. As I’ve always said: Expecting Turkey to bear the burdens of the region while denying its rights in sharing of resources is WRONG. https://t.co/o8MGHBzuA7

With no borders nor maritime jurisdiction in East Mediterranean Sea, France came rushing from western Europe to interfere in the maritime issues between Greece and Turkey.

It is no wonder. France is yet to pay for her crimes against humanity it inflicted against Africans and it will pay for her notoriety in East Mediterranean Sea.

Turkey’s rise in the regional politics from Middle East to Africa to Balkans has unearthed many a hegemon of the western world – France is not an exception.

Turkey, with a population of 83 million souls, is improving its global outlook with progress in industries, agriculture, defense, health, social welfare and education. However, the country is energy deficient which costs its exchequer in between 30 to 50 billion dollars annually.

With an advanced search for energy, Turkey has set its three drilling machines in energy rich East Mediterranean Sea.

The Sea — possibly possessing biggest natural oil and gas reserves — is surrounded by at least eight countries including Turkey and divided Cyprus. France is not in the picture at all.

To its advantage, Turkey shares most of the Sea’s shores and thus is legitimate in its shares of shelf resources under the sea.

However, Greece – fed with a defeatist mentality – has signed so-called maritime agreements – termed null and void by Ankara – with Egypt claiming most of the economic zones in the sea, excluding Turkey.

However, through its “Forward Block Diplomacy”, a termed coined by Turkey Affairs analyst Yusuf Erim, Ankara continues to drill in the Sea to safeguard its rights.

Turkey’s President Recep Tayyip Erdogan has asserted his country’s position that Turkey “will do whatever is needed to obtain its rights in Black Sea, Aegean and Mediterranean”.

Turkey is a long-time candidate to join European Union (EU) which has 27 members until now. And now public perception seems changing in Ankara that EU won’t be so naïve to “let in a Muslim country in a Christian bloc”.

It was evident during 1974 Cyprus Peace Operation that Turkey had to militarily intervene as a guarantor country to save ethnic Turks and the Cyprus was divided.

EU did not intervene to do a fair mediation. And this time, EU appears to have pushed forward France, led by Emmanuel Macron, whose rating has dipped in his own country due to year-long protests against what are described as inhuman policies.

There are many a reason about France’s Greece bid.

Emboldened by Paris support, Greece made the biggest provocations in the Sea last Friday night.

Active and alert Turkish Airforce warded off six Greek F-16 jets as they approached the region in the Eastern Mediterranean Sea where Turkey issued a maritime Navtex alert.

Turkish F-16 jets intercepted jets approaching the area where Turkey issued Navtex alert in the Cyprus island’s southwest and warded them off after finding that jets belonged to Greece.

Navtex or Navigational Telex is a maritime communications system that allows ships to inform other vessels about their presence in an area, as well as other information.

The Turkish navy in a new Navtex advisory said it will hold shooting exercises in the eastern Mediterranean south of the town of Anamur in Mersin province.

Anamur is located 73 kilometers (45 miles) north of the coast of the Turkish Republic of Northern Cyprus (TRNC).

Interest of France in the Eastern Mediterranean has not been new. France came there after the WWI and immediately sent back home by Turks. She is free to come back once again, but has to pay the price of it. @EmmanuelMacron https://t.co/C3wsUqlQ9w

Besides, Turkey’s role in changing the power politics in Libya had already mounted defeat to sponsors of warlord Khalifa Haftar. France is one among them besides Russia and United Arab Emirates.

Erdogan’s popularity in Arab world ruled by autocrats – friends in arms with western world for their security and safety — has increased manifold.

These developments seem to have triggered Macron outburst on Friday who said “has set red lines (in Eastern Mediterranean) because Ankara respects actions not words”.

One must not forget that Paris is regular defiant of US, EU and Turkish sanctions against terror groups YPG/PKK. It aides and supports them.

France a spoiled baby – why? ‘Because of the ottoman legacy’

Re-opening Hagia Sofia – Aya Sofia – as mosque was a long-time demand of Turkish nation and Erdogan fulfilled this wish in July.

It, of course, did not go well with the Christian world.

According to Economist Muhsin Kar: “Interest of France in the Eastern Mediterranean has not been new. France came there after the WWI (World War-I) and (was) immediately sent back home by Turks. She is free to come back once again, but has to pay the price of it.”

On failing designs of Paris in Libya, Kemal Inat, International Relations academic at Sakarya University in Turkey, said:
“In its desire to place Libya at the top of its energy supply chain after Algeria in North Africa, which is geographically closer, France wants to decrease its dependence on oil from other regions. Establishing control over the energy resources of Libya would bring a much-needed foreign policy success to Macron and silence his opponents in domestic politics, particularly the far-right Le Pen.”

Inat argues Macron came to office with a mission to “deliver France from the shadow of Germany and return it to its old and powerful days, and, in this way, make it the actor holding the reins of power in the EU”.

“If Macron fails in this mission, the far-right taking power in France in the next election is a prospect that he fears but also sees as a new opportunity for himself,” Inat said in a recent piece for Anadolu Agency.

It is not surprising to see Germany pressing for dialogue between Ankara and Athens to solve the dispute over east Mediterranean Sea. Although it flipflops its language when pressed by “Christian EU”.

Prominent Turkish analyst Ihsan Aktas, however, believes that Turkey is “successfully exerting its power in the international chess game”.

“Greece (has) put its trust in European (EU) countries, whose influence on world politics continues to decrease dramatically,” Aktas added.

So, is France swearing at its next defeat, this time in Sea!