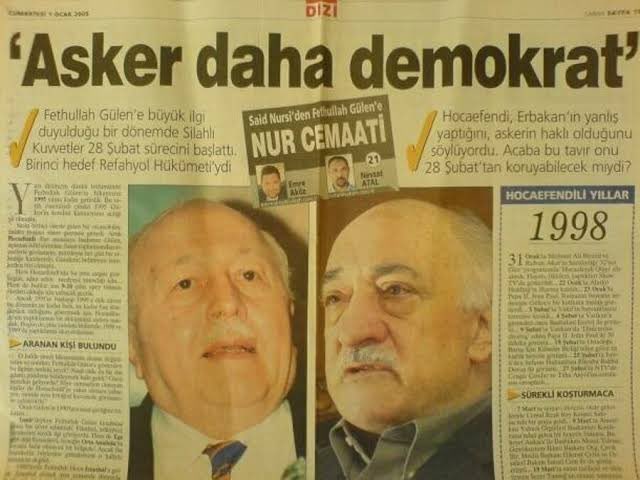 It has been 24 years since the Turkish army forced the Necmettin Erbakan government to step down in 1997 by pushing through a memorandum terms of which aimed to annihilate conservative segments of Turkish society under the pretext of fighting political Islamist ideology. Late prime minister Erbakan had no choice but to resign as he faced media, powerful secular elite and the army all together. But the biggest blow to Erbakan’s conservative government came from inner circle of conservatives as the Islamic-disguised Gulenists threw full support behind the military during one of the most gruesome human rights violation campaigns which would later be dubbed “February 28 process.”

Professor Necmettin Erbakan has been commemorated on his 10th passing anniversary on Saturday, February 26th. Erbakan’s Welfare party came out of the 1995 elections with a victory despite objection of Turkey’s powerful secular elites. However, then-president Suleyman Demirel refused to give the authority to form the government to Erbakan as the laws require. An hijack coalition attempt failed the confidence vote in the Parliament because Erbakan’s party was holding the majority. Demirel then had to hand the duty to Erbakan whose government was approved by the Parliament on July 8th, 1996.

The following 7 months might have been one of the most chaotic and shameful period in Turkish political history. Countless provocations and some reckless actions of Welfare party officials ripe the grounds for the army to interfere in democratic process as a self-assumed duty.

On February 28th, 1997, 9-hours-long National Security Council (NSC) meeting concluded with series of decisions known as the “February 28 Memorandum” which aimed to crush the conservative circles of the Turkish society.

Private schools, foundations and businesses with religious backgrounds were shut, while devout Muslims were largely marginalized from public institutions including government agencies, state universities, the civil service, the judiciary and the military. Perhaps the most notorious policy was banning of headscarf in schools as it usurped the education right from hundreds of thousands of girls.

On June 18 1997, the military went on to the next phase and forced Erbakan’s entire government to resign. The unfolding events of the so-called postmodern coup literally crushed the religious Turks except a single “Islamic” group: Gulenists.

Fethullah Gulen has played an important part in legitimization attempt of the coup in the eyes of conservatives. Gulen was regularly quoted by pro-army mainstream media during the period asking Erbakan government to step down. One infamous headline quoted Gulen saying “Army is more democrat.” Gulen has even penned a long letter to general Cevik Bir, the mastermind behind the postmodern coup expressing his gratitude. Gulen movement, a big conglomerate with schools, banks and TV networks avoided the crushing military boots unscratched.

The following 2 decades, Gulenists continued to infiltrate the state institutions especially the army. In 2016, the Islamic-disguised shadowy group took the stage again, this time as the perpetrator. In 1997, military could force the government to step down without taking up arms but in 2016, suicidal Gulenists murdered 251 people over night meeting a great resistance from civilians thus failing to topple the government.