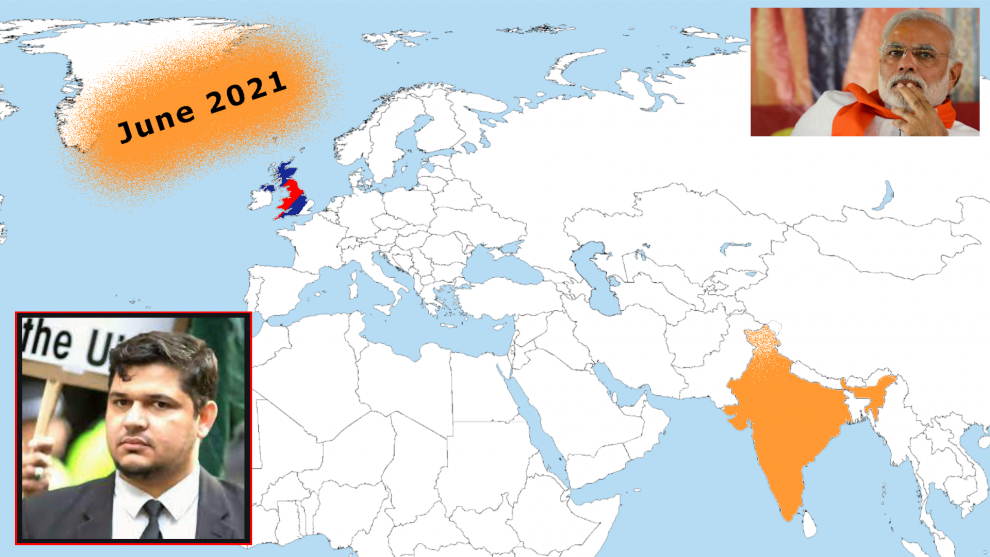 UK facing ‘three day sit-in protest from 11th-13th June 2021 and a national demonstration in 12th June 2021’ during  G7 Summit 2021  under the umbrella of United Front Against Indian PM Modi.
The planned UK demonstration announced by Mr Fahim Kayani, the president of Tehreek-e-Kashmir (TeK) UK, the organisation’s executive committee have decided to hold a three-day sit-in protest, between 11th to 13th June 2021; and a national demonstration will take place in 12th June 2021, under the umbrella titled as “United Front Against Modi”.
Stated by TeK, for the planned three days protests, prominent Leadership of Pakistani, Kashmiri, Bangladeshi, Sikh and Indian minorities; as well as the Palestinian and many other Socialist organisations have been taken on board.
Pointing to the importance of this unity Mr. Fahim Kayani President Tehreek-e-Kashmir (TeK) UK highlighted that: “We must knock on all possible doors to form a strong coalition to lobby at an  International level against Modi’s regime and reign of terror. Our Palestinian brothers and sisters agree that Modi and the BJP are enemies of Palestine as well due to the partnership between Israel and India and their settler colonial project to force demographic change. It is unacceptable that the G7, and the UK in particular, would invite nations  who have abysmal human rights records and not be held to account”.
The resolute ‘United Front’ plans to stand against India’s Prime Minister Modi’s oppressive policies, which taking practice against the vulnerable citizens in India and IO Kashmir; and will also stand for all the involved representatives’ Human Rights.
In the meantime, whilst adopting a joint strategy in sectors of media, TeK leadership also noted ‘the United Front will continue with its Parliamentary lobbying; lobbying activities in local councils; plus, will organise many national/international peaceful demonstrations with the purpose of human rights in core’.
The TeK UK leader Mr Kayani reminded everyone that ‘Modi’s attendance to the upcoming G7 UK summit 2021, will give him an international profile that he does not deserve, due to his complicity in war crimes, crimes against humanity, ethnic cleansing, genocide, demographic chance and settler colonialism. His participation would make Britain complicit in his war against the people of Indian occupied Jammu and Kashmir as well as minorities in India. It must be noted that while he was chief minister of Gujrat, he was refused entry to the U.S and  travel ban imposed on him by the UK, the U.S and some European nations, as well because of his involvement in the riots in Gujrat in 2002 that left over a thousand dead. Among the dead were at least three British citizens’.

Turkey has proven its capacity of game-changing trans-continental influence
ISIS is still among us: Turkey nabs 22 Daesh/ISIS suspects