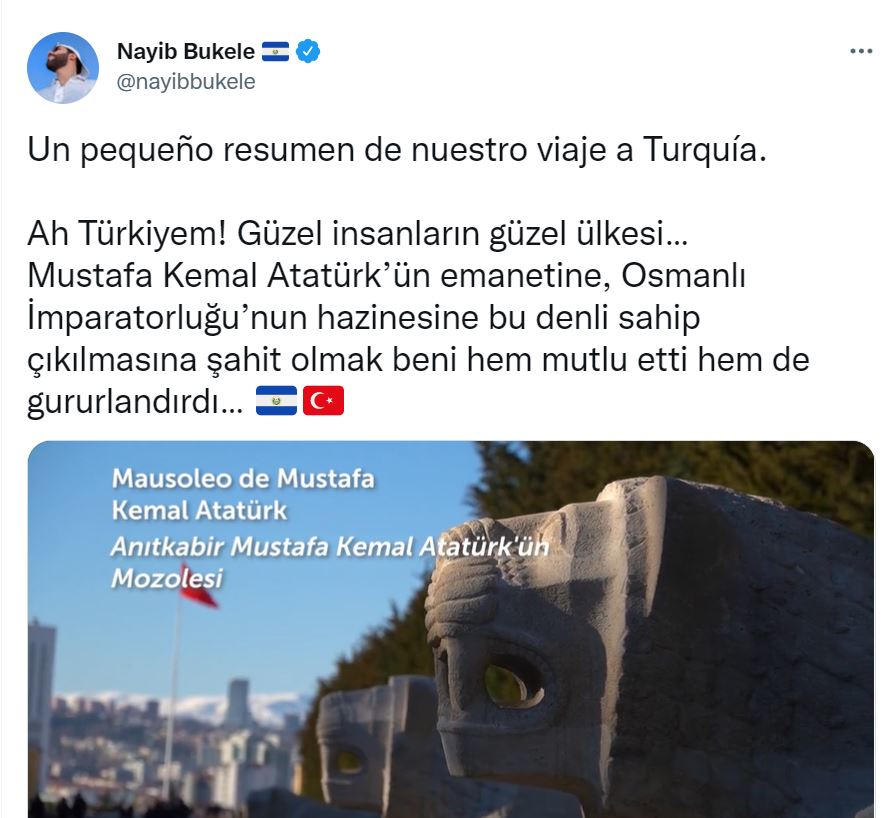 “Oh, my Turkey! The beautiful country of beautiful people … It made me both happy and proud to witness the trust of Mustafa Kemal Atatürk and the treasure of the Ottoman Empire being taken care of so much…”

El Salvador’s President Nayib Bukele swept through Turkey lust a gust of wind. However, in the aftermath of his productive visit, his Twitter post above remains.

From start to finish, everything about the visit was extraordinary – in a good way. One of the reasons, of course, is that Bukele has an unusual leadership profile. The 40-year-old leader follows trends very closely and uses social media effectively. The simplest example is his Twitter account, where he refers to himself in his biography as the “CEO of El Salvador,” rather than the president. Bukele is the first leader to recognize Bitcoin as legal tender. In essence, his communication team has managed to go far beyond the Western diplomats’ habit of taking photos while eating kebabs…

Located thousands of kilometers away from our country, what establishes the warm bond between us and this Central American nation that is not quite on Turkey’s diplomatic radar? Of course, it’s the Ottoman legacy on which our country is built and rises from, and which never disappoints us. The impact of an empire that dominated continents, naturally, is felt all over the world. It changed the course of history and influenced politics. For example, British Prime Minister Boris Johnson is the descendant of an Ottoman cabinet minister. But I am sure that no one could have predicted that that legacy would one day appear before us in the most important seat of El Salvador. Therefore, I would like to tell you about this extraordinary leader’s extraordinary Ottoman connection.

Bukele’s roots go back to Ottoman-administrated Palestine. He comes from a family that immigrated to South America with an Ottoman passport from the Palestinian territories of Jerusalem at the beginning of the 20th century. His father, Armando Bukele, is a prominent Muslim businessperson and local imam. Coming from a Christian family, he later converted to Islam and eventually became one of the foremost leaders of the Muslim community in the country. So much so that the founder of the country’s first mosque in 1992 is none other than the paternal Bukele. He also wrote a book called “A B C of Islam.”

The Bukele family company operates in many fields from the textile to the pharmaceutical industry. Since Bukele comes from a family that is so involved in commerce, he starts his own business at the age of 18 and then enters politics. And he climbs to the top…

Bukele won the elections in 2019 when he entered the presidential race as the former mayor of the capital, San Salvador. The slogans he used in his campaign, including “If those in power give back what they stole, the money left is enough for all of us,” won great sympathy, especially among the youth. His casual clothes are a big component of his image, with the president showing up dressed in jeans and a leather jacket to many events.

This young leader, who has a background that could be the subject of movies, is managing his country – despite the criticism – in an unusual way. From time to time, he also challenges the actors of the world’s established order such as the International Monetary Fund (IMF). Maybe this is one of the reasons why he feels so close to Turkey – apart from his Ottoman roots – because Bukele met a president who left his mark on Turkey by fighting against both local and global actors of the established order.

Indonesia Eyes Turkish Drones – But Which Types?
BBC staff on strike in Turkey