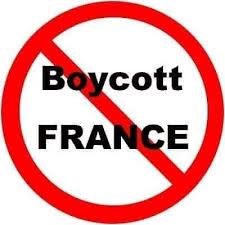 Addressing a ceremony in capital Ankara, Erdogan said: “I call on people of my country to boycott French products.”

Erdogan said Islamophobia was at its peaks in Europe especially in France.

A broad-based boycott campaign has been launched against French products after its antagonist president Emmanuel Macron resorted to disrespect to Islam and its last Messenger Revered Muhammad (SAW).

France has already faced the heat as campaign is intensifying in past two days.

French jingoism has invited sharp reaction after Erdogan called out Macron for his Islamophobic actions.

The #boycottfranceproducts and #boycottfrance are running high on social media campaign and people in Qatar, Kuwait, Turkey and Pakistan have started junking French products.

France has already faced the heat with its government pleading with Muslims world to stop the campaign.

The Battle for the Soul of Islam
Geert Wilders’ wild links