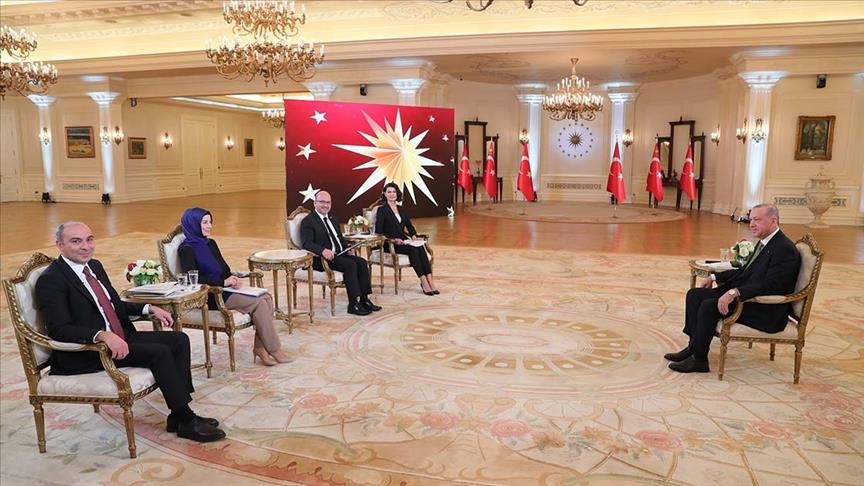 Erdogan reiterated his forecast that he expects the Turkish economy to expand by 10% at least by the end of this year and said economic growth can surpass that level.

He added that Turkey is lowering interest rates at the moment and will hopefully see a decline in inflation as well.

“We will never let anyone make economic growth unstable and we will get out of this spiral,” he noted.

Noting that Turkey has been in a spiral regarding high interest rates and speculation in currency, he said the latest fluctuations seen in exchange rates do not reflect the strength of the Turkish economy.

“We will give no quarter to those who are operating to disrupt the markets and disturb pricing behaviors,” Erdogan said.

“The aim is to increase the comfort of our people and small businesses with low interest rates and also achieve more investment,” he said.

“Until the elections, we will see lower interest rates and better exchange rates, including an improvement in inflation,” he added.

Erdogan highlighted that Turkey’s export volume has reached a record high of approximately $220 billion at the moment, and it will climb above this level by the end of this year.

He noted that the government has prepared two support packages that will provide credit access of up to 100,000 Turkish liras (around $7,300) for companies with less than 50 employees.

The president reiterated that general elections in Turkey will be held in June 2023 as planned.

Speaking on the reconstruction of relations with the Gulf countries, Erdogan said: “This step we took with the Abu Dhabi administration is a historic step.”

During al-Nahyan’s visit, the UAE announced a $10 billion fund for investments in Turkey, and the two countries signed several cooperation agreements on energy, technology, trade and health.

This was his first official visit to Turkey since 2012 and the first top-level meeting between the UAE and Turkey in recent years.

With visits paid at the top and ministerial levels until February, when Erdogan is expected to pay a return visit to the UAE, Turkey’s course with the UAE will have reached a “very different level,” Erdogan said.

“We will bring our relations with all of them [Gulf states] to a much better position,” he added.

“There is still a very serious cooperation potential between us and the Gulf countries. Our economies are complementary to each other and we see new cooperation projects based on mutual benefit as an opportunity for joint investments,” said Erdogan.

He went on to say that top visits from Bahrain to Turkey are also expected at the nearest times.

“We will endeavor to improve relations with Saudi Arabia. It continues at the ministerial level with Egypt. There may be very different developments there,” Erdogan stressed.

On ties with Egypt, Erdogan earlier said the appointments of ambassadors will be set on a certain calendar once Turkey decides on the course of relations with the country.

“We built the ancient history together and share it together,” he said.

“We are the country that suffered the most from the negative consequences of the Syrian conflict,” Erdogan said.

Terrorism is perhaps the most important consequence which threatens the Syrian people, the country’s territorial integrity and our national security, he noted.

In its more than 35-year terror campaign against Turkey, the PKK – listed as a terrorist organization by Turkey, the US and the European Union – has been responsible for the deaths of at least 40,000 people, including women, children and infants. The YPG is the PKK’s Syrian offshoot.

In 2013, Turkey became one of the first countries to declare Daesh/ISIS a terrorist organization.

The country has since been attacked by the terror group multiple times, with over 300 people killed and hundreds more injured in at least 10 suicide bombings, seven bomb attacks and four armed assaults. In response, Turkey launched anti-terror operations at home and abroad to prevent further attacks.

“From time to time, there are those who make unfounded allegations against our country in the context of Daesh/ISIS. First of all, they should review their own attitudes,” Erdogan said, referring to France’s operation to support the Daesh/ISIS terror organization via French cement giant Lafarge.

Erdogan highlighted that the tunnels, rooms and underground constructions have been built with the support of Lafange.

Lafarge has operated a cement factory in northern Syria during the country’s civil war.

“I told this to [French President Emmanuel] Macron himself…They are like that, unfortunately. They are twofaced,” Erdogan said.

The documents exposed how Lafarge, charged with complicity in crimes against humanity regarding funding Daesh/ISIS operations in Syria, had a relationship with the terror outfit that French intelligence fully knew about.

French agencies, according to data obtained, used Lafarge’s network to get intelligence in the region and maintain operations.