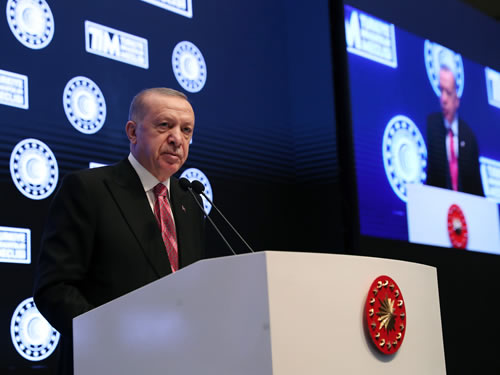 Delivering remarks at a meeting on foreign trade data of 2021, President Erdoğan said: “As we near 2023, the 100th anniversary of our Republic, Türkiye is going through a transformation in economy, and rising to the next league.”

“We are reaping the fruits, especially in exports, of our country’s efforts and hard work in the past 20 years to bolster our foreign trade,” President Erdoğan said.

“The Turkish economy continues to develop in line with principles of investment, employment, production, exportation and growth through current account surplus. The export data, we will announce in a short while, are the epitome of our commitment to our goals and of our sure progress on the right path. As we near 2023, the 100th anniversary of our Republic, Türkiye is going through a transformation in economy, and rising to the next league,” President Erdoğan noted.

Noting that the effects of the rise in the export volume on growth could be more clearly seen in such indicators as industrial production, capacity utilization rate, and employment, President Erdoğan said: “The Industrial Production Index reached a record level in October by rising to 143.6 with an 8.5 percent increase on an annual basis. The manufacturing industry’s capacity utilization rate even exceeded its pre-pandemic level, and reached 78.7 percent in December. This momentum had a positive effect on employment. The Turkish economy generated 2 million additional jobs as of October 2021 in comparison to the pre-pandemic period. While the OECD member countries are expected to recover in terms of employment in the Q3 of 2023, the Turkish economy, with its dynamic structure, rapidly reclaimed the pre-pandemic levels.”

Turkey’s exports reach $225.4 billion in 2021
Despite currency woes, Turkey may be right to cut interest rates