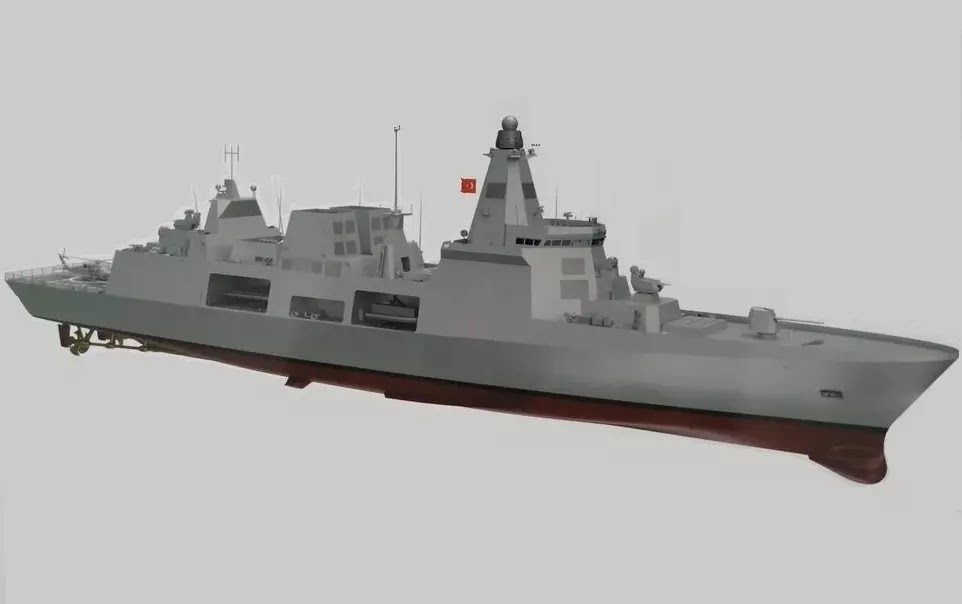 By Stijn Mitzer and Kemal
The Turkish Navy is set to build at least four TF-2000 air-defence destroyers that will be the most capable and heavily-armed naval vessels in the Mediterranean Sea once they enter service throughout the 2030s. The TF-2000 will incorporate almost every technological achievement made by Turkey in the field of naval systems in the last decade, including an indigenous vertical launch system (VLS) fitted with domestic surface-to-air missiles (SAMs) and Gezgin land-attack cruise missiles (LACMs) and (notably) directed-energy weapons including high-energy lasers (HELs).
These capabilities allow the TF-2000 to engage high-value targets at ranges over 1000 kilometres away using its land-attack cruise missiles, to establish anti-access area denial zones with up to 64 150+km-ranged SAMs and sixteen 220+km-ranged anti-ship missiles (AShMs) and defend friendly ships against enemy AShMs using its onboard high-energy lasers. The TF-2000s will also act as host platforms for unmanned systems including up to four missile-toting armed unmanned surface vessels (AUSVs), Bayraktar DİHA unmanned aerial vehicles (UAVs) and unmanned underwater vehicles (UUVs). [1] The TF-2000 will also likely be the first Turkish naval ship class to operationally deploy the indigenous Şahi-209 electromagnetic rail gun. [2]
Once in service, the TF-2000s are slated to be an integral part of Turkey’s expeditionary strike groups centered around the TCG Anadolu LHD and the country’s future aircraft carrier(s). The TCG Anadolu is to be followed up by the TCG Trakya light aircraft carrier and President Erdoğan has also hinted at the construction of a larger aircraft carrier that is to be designed in cooperation with Spain. [3] These capital vessels require destroyer escorts to defend them against enemy aircraft, ships and submarines, in other words, the perfect role for the TF-2000s once all of these will be ready for operational service in 2038.
The year 2038 will mark a century since the first domestically-designed warship was launched by the Republic of Turkey. On the 23th of March 1938, the Gölcük Naval Shipyard in Gölcük, Kocaeli, launched the Atak small minelayer. which would go down in history as the first warship constructed by the modern Republic of Turkey (which was proclaimed in October 1923 after the abolition of the Ottoman Sultanate in 1922). The launch of the Atak came two years after the launch of the Gölcük oil tanker in 1935, which was the first civilian ship designed and constructed by the newly-founded republic. [4] [5]
Based on the hull of a large seagoing tug, the Atak minelayer came in at a length of 44 metres with a beam of eight metres and a displacement of some 500 tons. [6] Its single 1025 HP diesel engine allowed for a maximum speed of thirteen knots. Armament consisted of 40 naval mines stowed on the rear of the Atak’s deck. [6] At some point after her commissioning a naval gun appears to have been added to the front deck. The Atak wore a disprutive camouflage pattern for a major part of her career, which was presumably applied during World War II. Turkey managed to stay neutral throughout almost the entirety of World War II, only declaring war on Germany and Japan in February 1945.

Although the design of the Atak is not special in and of itself, it signified the ambitions of a country that was increasingly looking to localise some of its defence needs. At roughly the same time as the Atak first entered the water, Turkish aircraft manufacturer Nuri Demirağ began the design of his revolutionary Nu.D.40 fighter aircraft, which unfortunately would never see the light of day. [7] Indeed, any aspiring Turkish industrialist would soon be confronted with a government that proved unwilling to provide the necessary ecosystem for a defence industry to thrive and survive.

Apart from the construction of five British-designed Bora class motor torpedo boats (MTBs) in 1942, the 1940s and 1950s saw no naval construction taking place in Turkey. [8] During this period, the Turkish Navy received significant numbers of naval ships from the United States, which essentially doomed any future prospect of indigenous naval shipbuilding for the coming decades. The Atak minelayer continued to see service during this period, outliving its successors in the form of two British-built Sivrihisar class minelayers and only being scrapped in 1961. [9] [6]
It would only be in the late 1960s that Turkey again began building naval ships, resulting in the construction of a dozen AB-25 patrol boats. A more ambitious project came in the form of the construction of two Berk class frigates starting in 1967. [10] Based on the U.S. Navy Claud Jones class with minor improvements to suit Turkish requirements, these were the first major warships built in Turkey since the 1910s! While their construction proved the feasibility of indigenous naval shipbuilding, no further orders for the construction of more ships followed. Only in the mid to late 2000s did the Turkish naval industry churn out their next large design project in the form of the MILGEM project, which so far has spawned the design and construction of several corvette and frigate classes.
As the latest iteration of the MILGEM project, the TF-2000s will be functionality akin to to the U.S. Arleigh Burke class destroyers. The TF-2000 will boast an indigenous 127mm main gun, sixteen 220km-ranged Atmaca AShMs, 64 VLS cells for 150+km-ranged SIPER surface-to-air missiles (among other SAMs) and 1000+km-ranged Gezgin land-attack cruise missiles, 324mm Orka lightweight torpedoes, two Aselsan 35mm Gökdeniz CIWS, two Meteksan Nazar high-energy lasers, chaff decoy systems, two weapon stations for UMTAS anti-tank guided missiles (ATGMs) and four remote weapon stations. The class will feature an extensive radar and sensor suite of domestic origin to detect enemy targets so that missiles can be directed towards them. Another similarity to Arleigh Burke class destroyers is the presence of full facilities for two S-70B Seahawk anti-submarine warfare (ASW) helicopters. [1]

The journey of a thousand miles begins with one step. While Turkey was quick to take its first step in the late 1930s, the decades that followed marked a period of neglect of the country’s defence industry. In the last two decades the Turkish government has reversed this trend with amazing speed, embarking on a journey to self-sufficiency that is arguably the fastest of its kind occurring today. It won’t be long before the Turkish defence industry will be capable of producing nearly every type of ship along with their associated armament and equipment such as radars and sensors. Once in service, the TF-2000 will be a testament to the country’s journey to self-sufficiency, and be a worthy 100-year renaissance of the Atak minelayer. 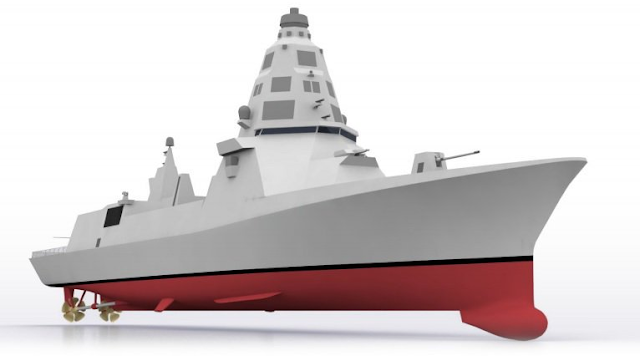