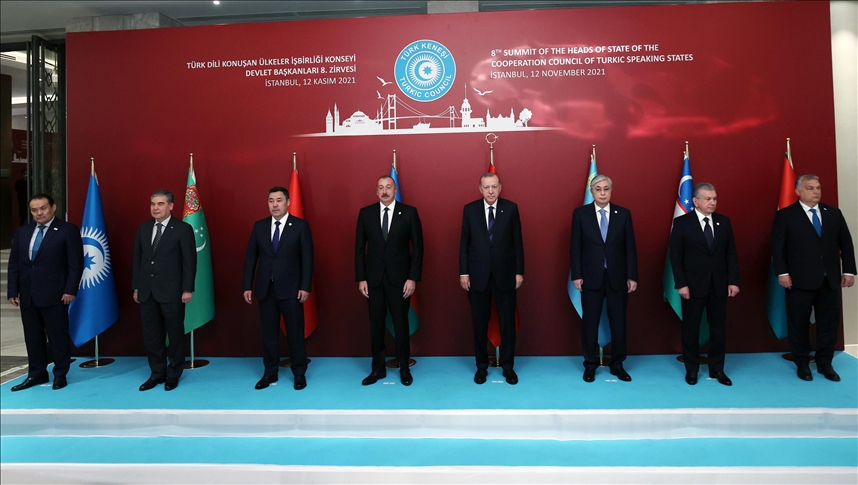 It should be noted that the transformation of the Turkish republics celebrating the 30th anniversary of their independence and the Turkic Council established in 2009 into the “Organization of Turkic States” in such a short time was a historical development that we could not even imagine until recently. The Turkish world already has a population of 300 million, an area of 4.5 million square kilometers, and an economy of $2 trillion. In the 21st century, when the weight center of the economy shifts to Asia, the integration of Turkey and Azerbaijan by 2040 with the great geography of Turkestan, which is located on the Silk Road route between Europe and Asia, will provide important opportunities for the Turkic world.

Undoubtedly, the most important development at this summit is the change in the name of the council. The translation of the name of the Cooperation Council of Turkic-speaking Countries into the Organization of Turkic States marks a historical and fundamental transformation. Because the phrases of “the Turkic-speaking countries,” “Peoples with Turkic language,” and “Turkic-speaking peoples” were produced by Nikolay Ivanovich Ilminski, the famous Turkologist of Russia in the 19th century, which occupied the great geography of Turkestan. These terms were based on the educational method to accelerate Russification activities by dividing the Turkic peoples by making Turkic dialects into different languages. With this name change, the terms “Turkic-Speaking Peoples and Countries,” which are widely used in the geography of Turkestan, have been replaced by “Turkic Peoples or States.” It is necessary to consider this change as a radical transformation of mentality rather than a symbolic name change. In addition, the transformation of the cooperation council, which means the board, into an organization has great meaning in terms of corporate change and the future.

In the opening speech of the summit, it is politically important that Turkish President Recep Tayyip Erdogan touched upon the issue of recognizing the just cause of the Turkish Republic of Northern Cyprus (TRNC). The emphasis on the fact that the trade volume between the member states of the organization has not reached the desired level, which should be emphasized, should also be noted.

Nursultan Nazarbayev, the founding President of Kazakhstan, who has very important services to the unity and togetherness of the Turkic world, attended the summit via video conference. “With this summit, we can convey the message to all our sisterly and brotherly peoples around the world that Turkic civilization has begun to revive, the Turkic states have come together and established a new agenda item and ideology” Nazarbayev said.” His statement forms the main idea of the decisions taken at the summit. It is also very valuable that the President of the Republic of Kazakhstan, Kassym-Jomart Tokayev, emphasized the era of former Turkish Prime Minister Adnan Menderes, who “opened his heart to the Kazakh sisters and brothers.”

In the final declaration of the summit, the registration of Azerbaijan’s Karabakh victory and right by the organization’s member states once again is also a deterrent against threats to the member states from now on. Because Turkey’s unconditional support for Azerbaijan during the war had found great support for the Turkic peoples living in the geography of Turkestan.

Undoubtedly, one of the most important decisions of this summit is strengthening economic ties between the member states. The most notable decision in this regard is the formation of the “Turkic Investment Fund,” which will be created with the equal capital contribution of the member states by Sept. 1, 2022. The importance of large investment funds in today’s economy is known to everyone. Therefore, establishing a common development fund means a union of forces in the economic sense, and this may also be a harbinger of greater cooperation in the future.

However, the decisions taken regarding the economic cooperation of the member states, increasing the trade volume and the Caspian Transit International East-West Central Corridor, which are vital for the development of the Silk Road, should be taken with due attention. The invitation of Kazakhstan to participate in the economic zone “TURANSEZ,” which will be established for the Turkic states in the city of Turkestan, one of the important intersections of this corridor, was welcomed by the member states. To use this corridor as a more efficient and uninterrupted route, the “International Combined Cargo Transportation Agreement between the Member States of the Organization of Turkic States” has taken its last shape to simplify troublesome customs procedures among the member countries and for facilitate transportation corridor. In addition, supporting Azerbaijan’s efforts to integrate the Zangezur Corridor into the Caspian International East-West Central Corridor are also important steps in terms of economic integration between the member states.

Cooperation in fields of education, culture

Among the decisions taken at the summit, education and culture are also important deconstructions. Important to establish an international television channel broadcasting to the Turkic world in Turkestan, Kazakhstan, and to create a common higher education area. Furthermore, the decisions are taken by the organization’s member states to strengthen the Orhun Exchange Program in the field of higher education and prepare student exchange programs in secondary education also show promise in terms of ensuring integration in the Turkic world, especially in the field of education.

The decisions about the expansion of the Turkic Universities Association (TURKUNIB) with the participation of new universities from Uzbekistan, Kyrgyzstan and Turkey, simplification of the founding procedures of schools to be built in the Turkic world by Turkey’s Maarif Foundation (TMV), and preparation of course books on “Common History of Turks,” “Geography of Turkic World” and “Common Turkic Literature” are also admirable.

Undoubtedly, it is important to take these decisions, but even more important is eliminating bureaucratic obstacles arising from the member states’ own legislation in the implementation of these decisions. If, by 2040, the member states show their will to implement the articles mentioned above, the obstacles to referring to the 21st century as a “Turkic Century” will also disappear.

Let’s talk about democracy and human rights, but on a full stomach.
The UAE’s strategic realignment