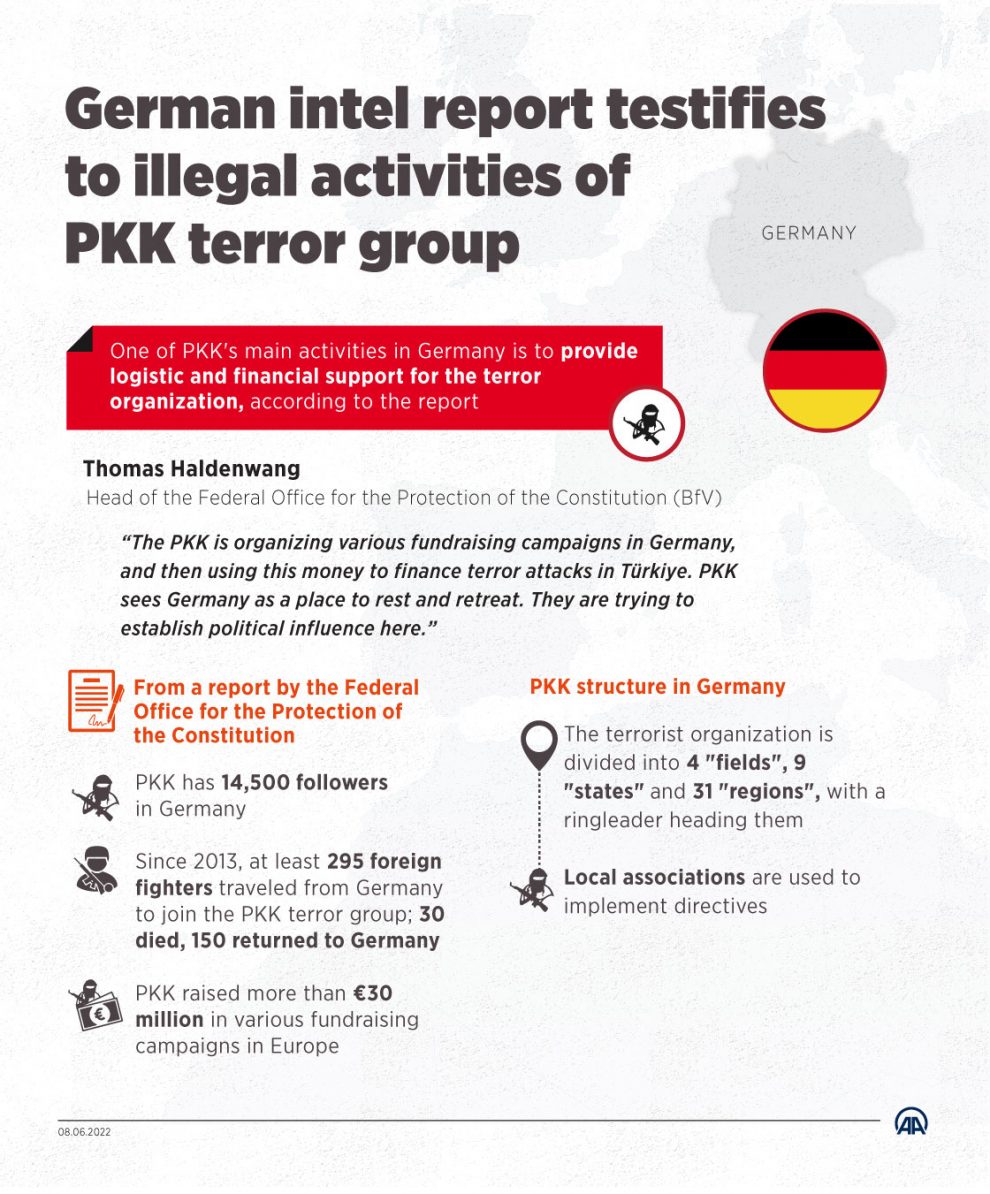 Germany’s spy chief on Tuesday admitted that the country has become a platform for the PKK terror organization’s fundraising and recruitment activities targeting Türkiye.

“The PKK is organizing various fundraising campaigns in Germany, and then using this money to finance terror attacks in Türkiye,” Thomas Haldenwang, head of the German domestic intelligence agency BfV, told a news conference in Berlin.

He said the PKK terror group is also using various associations in Germany to recruit young people as foreign fighters, who are then sent to Türkiye, Syria, or Iraq.

“The PKK remains an international terror organization, it continues violent attacks and killings in the region,” he stressed.

According to the BfV’s annual security report released on Tuesday, the PKK terror organization is the biggest foreign extremist group in the country, with around 14,500 followers.

Since 2013, at least 295 foreign fighters from Germany have traveled to northern Syria and Iraq where they received military training from PKK terrorists and took part in armed attacks in the region, according to the report.

At least 30 of these foreign fighters have died in battle zones, while nearly 150 of them have returned to Germany in recent years, the report said, without giving any further details.

In northern Syria, the PKK terror group is called the YPG/PKK, as stressed by Turkish officials.

According to the BfV, followers of the PKK group committed more than 300 crimes last year in Germany, including violent attacks, resulting in personal injury and property damage. At least nine people were injured in these attacks.“In Europe, the PKK has been trying to portray itself as a non-violent group,” the report said, referring to the terrorist organization’s propaganda activities to influence European public opinion.

But in many demonstrations in recent years, PKK followers used violence and clashed with the police or political opponents, according to the report.

The PKK, which is classified as an “ethno-nationalist” and “separatist” terrorist organization by the EU’s law enforcement agency Europol, has been banned in Germany since 1993.

Although Türkiye has repeatedly called on its NATO ally Germany to take stronger action against the PKK, the terrorist group’s activities have been largely tolerated by authorities, and Berlin has been reluctant to do more to combat the group.

In its more than 35-year terror campaign against Türkiye, the PKK has been responsible for the deaths of at least 40,000 people, including women, children, and infants.