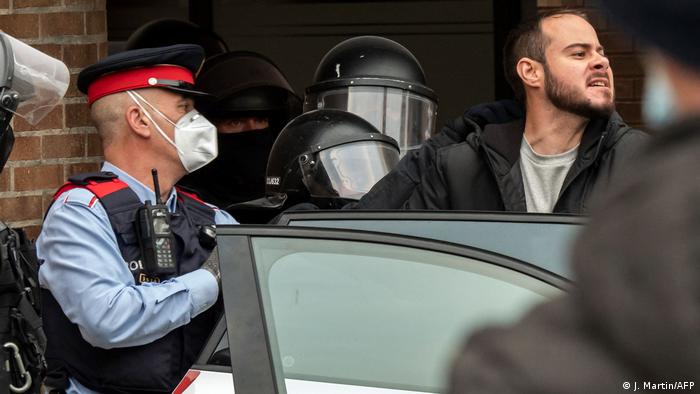 Spanish musician Pablo Hasel has been apprehended by police on Tuesday from a university where he barricaded himself after he refused to surrender to the authorities. The popular rapper has been sentenced to 9 months in prison for “glorifying terrorism” and “slandering the crown and state institutions” through his tweets and lyrics. European media’s editorial line over his arrest exposed how singing or tweeting in Europe could be reported as a crime while same action in other countries referred as freedom.

When Turkish authorities decided to press charges against members of a music band affiliated with far-left terror group DHKP-C, German Deutsche Welle used the headline “trumped up terror charges.” Reuters has also labeled Turkey’s action against the pro-DHKP-C Group Yorum a “crackdown on musicians.” In Pablo Hasel’s arrest, however, European media adapted to a totally different editorial line despite both incidents being similar. Deutsche Welle considered the arrest of Hasel a “national debate” while labelling Hasel’s criticism of monarchy through lyrics and tweets an “attack.” French news agency AFP took its editorial line to a whole another level when reporting Hasel’s arrest on Tuesday. “Spanish rapper Pablo Hasel is notorious for incendiary tweets and lyrics,” said AFP in its report. The French agency has also considered the fact that Hasel had a beard was an important detail to point out. AFP, too, decided to use the term “attack” when referring Hasel’s tweets criticizing Spanish monarchy.

In Turkey, authorities have pressed charges against dozens of people over the years for insulting president Erdogan or other state officials. As opposed to Hasel’s case, European media have never considered that the insults were “attacks” on Turkish officials or institutions. Turkish Prosecutions’ actions have always been reported with extremely negative terms like “an attempt to silence.”  Pablo Hasel may have been using Twitter to promote his political views but his case shed light on hypocrisy of western media.