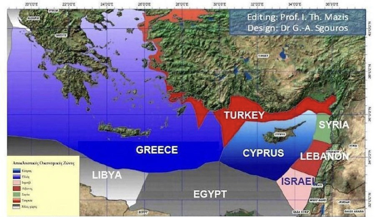 Well, actually the below “map” says it all: “Hellenic States” namely Greece and South Cyprus claim to own pretty much the entire Aegean and Mediterranean! Yes – not joking, they really do!! But is this really possible? What are the basis of their claims?

What Greece is trying to do (by manipulating the EU as well) is nothing but a deliberate misinterpretation of the maritime laws. They claim each and every “rock” in the Aegean and Mediterranean which somehow were occupied by Greece post-WW2 without Turkey’s consent or involvement grants maximum territorial entitlement on surrounding waters! Hence, they claim, for instance, the island of Meis which is slightly bigger than a rock with the population of circa 300 people and only 1 km away from Turkey but 570 km’s from Greece mainland, grants some 60.000 km square area on the Mediterranean!!

This deliberate misinterpretation however is doomed to fail, not only because of the way how such islands are occupied by Greece in the first place, but because GREECE IS NOT AN ARCHIPELAGIC STATE, meaning vast majority of the country is situated on the mainland of Europe. Greece tends to wittingly misinterpret the United Nations Convention on the Law of the Sea (UNCLOS) (to which Turkey is not a signatory by the way) by forming and ill baseline against which the exclusive sovereignty is measured.

Hence, every piece or rock which they somehow occupied after WW2 by ill-meetings and “agreement” with solely Italy and without any formal or informal representation by Turkey in fact do not grant them entitlement as if Greece was an archipelago like Indonesia or The Philippines!

Alienated by EU, Greece Finds Itself Losing More Ground in EastMed
Pakistan-Saudi Spat: Hitting the Kingdom Where It Hurts