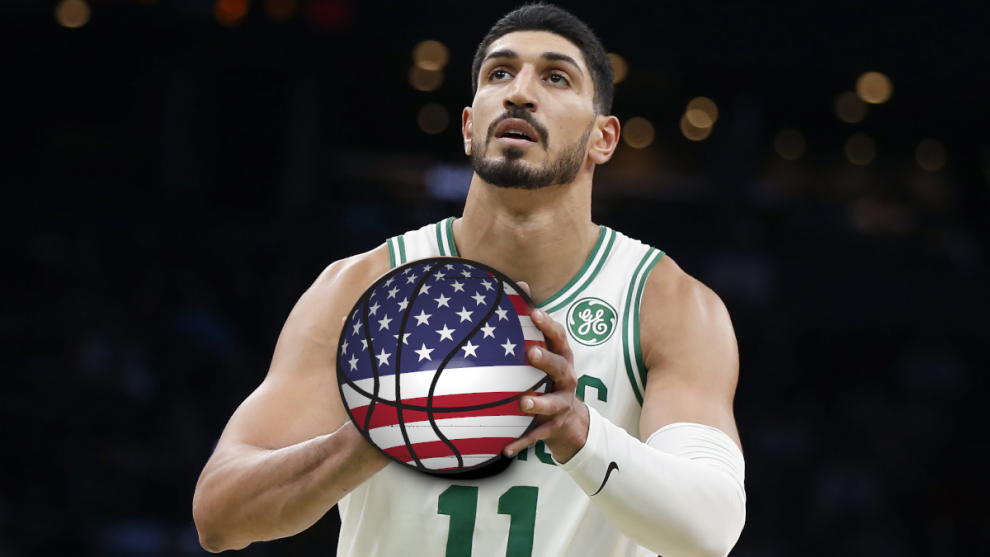 American sports especially NBA have always been dominated by African American players whom are outspoken about discriminations and violence black people face in the US but when it comes to join the George Floyd protestors, a little known Boston Celtics center Enes Kanter assumed a major role after he took it to the streets of Boston to chant I can’t breath while wearing his green Celtics jersey. Only three other lesser known players joined the protests marred by violence while prominent powerful figures of the league preferred to stay home. But how did a little known white Turkish athlete became a major figure in an all American matter despite NBA is known for staying out of anything that could hurt its global image.

When NFL players started to kneel down on one knee during national anthem to protest systematic police brutality against blacks, it, at some point, became a political friction point. NBA quickly prohibited its players from kneeling down fearing the league’s image would get tarnished. The whole world also witnessed last year how NBA stays strictly out of anything other than basketball when Lebron James declined to comment on a human rights issues question in China after a pre-season game there. James’ attitude did not certainly represented a personal reaction but a corporate stance.
But a white Turkish center of Boston Celtics put on his jersey and joined the protests in Boston on Monday. How did NBA and its commissioner Adam Silver gave a green light to get one of its most valuable jerseys to be involved in a initially legitimate protest which later turned violent and political?

For those who follow more than just basketball, Kanter is known for his loyalty to a shadowy Islamist cult known as Gulen movement -also referred as FETO by Turkey- Its leader Fetullah Gulen has been residing in Pennsylvania for more than 2 decades and he is wanted by Turkish state for orchestrating the 2016 coup attempt which killed 251 people over a night and putschist jets bombed the Turkish Parliament. Turkey designated Gulen movement as a terror group after the failed coup.

Gulen was once recorded reserving his cup of tea for Enes Kanter after taking a few sips from it. Gulenists find it sacred to eat or drink left overs of their leader. Disguised under scholarly inter religious dialogue role, Gulenists are extremely secretive and powerful. The secret to Kanter’s bald presence in the protests marred by violence lies behind this secrecy and power which involves American politicians and the establishment.

Kanter was detained in Romania in 2017 when returning from a Gulen movement event after his passport was canceled by Turkish authorities. Under normal circumstances, a person without a valid passport should be deported back to his native country. However, Kanter managed to fly to the US over London with no passport which would require knowing important guys in Washington.

Gulenists in the US are known for their generous donations to Clinton family organizations. Kanter also frequents Clinton foundation events making no secret of his Islamic cult’s ties to the former president and the secretary of state. Kanter’s bald presence shoulder to shoulder with protestors while hundreds of powerful African American NBA players staying home should be evaluated within his cult’s relations to the Clinton family and the American establishment. Protests have not turned into anti-Trump naturally because law enforcement violence on black people was much bigger during Obama administration. Kanter politicizes NBA and Celtics’ jersey and NBA administration can’t do anything to stop it.