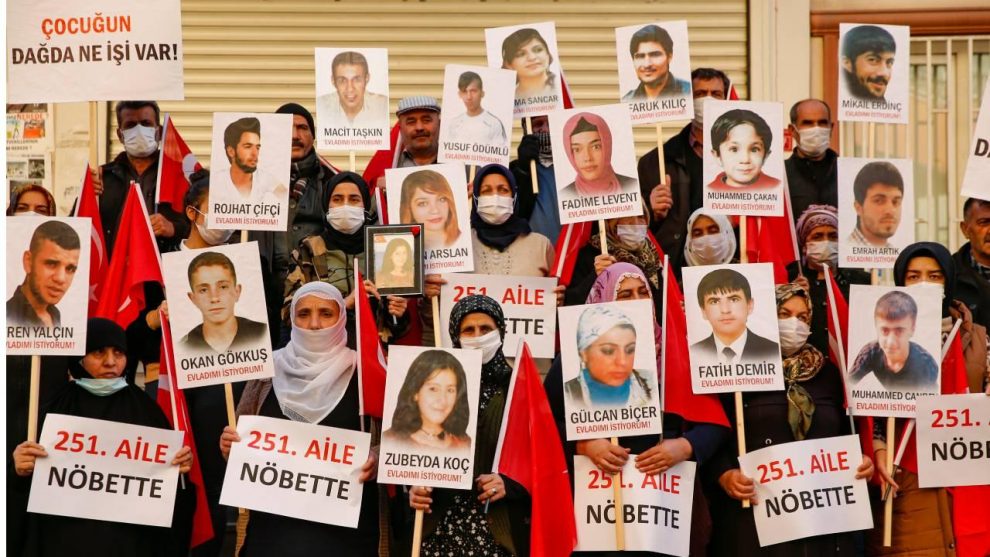 Since Sept. 3, 2019, a remarkable and unprecedented civilian initiative has been underway in Türkiye.

First mothers, then fathers too, of children and young adults, who were lured into northern Iraq’s Qandil mountains or outright kidnapped by the PKK terrorist organization, triggered a legendary resistance story by revolting against the terrorist organization that abducted their children into the mountains. Instead of “simple answers” they demand to be reunited with their sons and daughters. Thus, the painful parents’ sit-in protests started in Türkiye’s southeastern province of Diyarbakır.

Where exactly? On the doorsteps and outside the local offices of the People’s Democratic Party (HDP). Why choose a so-called “democratic” political movement as an address for the manifestations? Since the “Diyarbakır mothers,” the parents know who acts as an illegal conveyor belt between the terrorists and innocent young citizens. They know it is the HDP and no one else.

Courageous is an understatement of sorts – threatened by both HDP representatives and the PKK terrorist group trying to stop the mothers from continuing their daily protest with no such luck; in contrast, ever more mothers took matters into their own hands. Even during the COVID-19 outbreak with social distancing, relocating to a heated tent during harsh winters – no threat, nothing can stop them.

By now and over 1,220 long days later the protestors have become a symbol of Türkiye, which is a new, modern, democratic role model nation. Mothers represent everyone in the country and they send the clearest message to the last remaining baby killers, whose agenda is only anarchy and dictatorship.

Historic event
Last week, a purposeful event about the Diyarbakır mothers was held in Türkiye’s globally renowned Cappadocia region in central Nevşehir province. The event was organized by Türkiye’s Media Platform Association and co-hosted by the Interior Ministry and the Presidency’s Directorate of Communications, event attendees voiced their unwavering support for the mothers’ fight (and as mentioned above, by now fathers, too) in order to have their loved ones back at home. The First International Child Watch Congress brought together academicians, journalists, representatives of civil society, international guests and many local citizens including young students eager to find out what the proud mothers stand for and how to help in their epic fight.

Protesting parents in front of the Peoples’ Democratic Party (HDP) headquarters in the southeastern province of Diyarbakır, Türkiye, Jan. 3, 2022. (IHA Photo)
Detailed analysis of the many speakers, both from Türkiye and abroad, has already been widely published and hence this opinion page contribution aims to delve at the bigger picture. First, a brief look at some of the highlights of the opening speech made by Interior Minister Süleyman Soylu. Second, the role of the HDP as such. And third, the European dimension or shall we rather say, the lack of it.
Minister Soylu, very warmly welcomed in Nevşehir, truly spoke his mind and if ever another confirmation was needed to underline his government’s full-fledged support of the by now over 300 concerned families’ actions hoping that all missing children will safely return – a number of whom already have! As a matter of fact, it is his very own government’s relentless approach toward erasing the PKK once and for all from Türkiye’s soil that encouraged the mothers to voice their anger and sorrows. The good news is that over the years the number of terrorists decreased dramatically as Ankara stepped up counterterrorism operations and has been extremely successful at it. But a hardcore group continues to bring terror to innocent people, and in order to achieve their heinous goals, needs a constant supply of fresh recruits. This in turn is mostly only possible by exercising force should their attempt at brainwashing youngsters and promising them heaven on (terror) earth does not work out as planned.

He then did not mince his words by stating that the HDP is actually not a political party but the political branch of the PKK and that it would abuse its political legitimacy. Yet, what was truly inspiring was the way how the minister combined his intention to end PKK terror and further improve economic conditions in Türkiye’s southeast. Often neglected before the new millennium, today’s administration understands that it is impossible to bring economic and social welfare overnight and hence, sees it as a medium- to long-term undertaking. And what began almost two decades ago now bears fruit; new factories open up and employment opportunities are created. One can see new schools, universities, libraries, roads, hospitals, private and government housing and so on and so forth.

By providing for immensely improved living conditions everywhere in the southeast and thus having ended the often quoted “east-west gap” with a reference to the globally used reference to the “north-south gap” the government took the wind out of the terror clan’s sails. Minister Soylu then mentioned that no other power than the power of these women could remove the pressure, aka bring back the children.

The mothers, fathers, sisters and brothers know it – as written above recruiting for a terror clan would not be possible without logistical help on the ground. One cannot take a shuttle bus to the Qandil mountains, the last big hideout of the PKK. Let us recall that former HDP co-chair Selahattin Demirtaş once referred to the PKK as an “armed civilian movement” as if they do something “positive,” “a kind of struggle,” bizarre, toxic commentary. Did he have a chance to cut his party’s ties with the PKK? Certainly! Could his fellow party members do the same? Of course! But they would not, the linkage is crystal clear. Even normally rather “pro-freedom fighters” media abroad accept the fact that the relations between the PKK and the HDP are at least “problematic” and agree that there is a link.

And then the year 2015, as mentioned by Gen. Raymond Thomas back in 2017 when he said in Aspen, Colorado, that it was no one else but himself who told “the YPG to rebrand itself in northern Syria, changing their name into the SDF.” Often quoted as proof that the United States always supported the YPG (until this very day) he more or less congratulated himself by saying it was “a stroke of brilliance” by adding the word democratic into the YPG’s new label, a kind of rebranding.

Did the HDP listen? Of course, they “heard,” but they did not distance themselves from the PKK. The Diyarbakır mothers are well aware of this silence and complicity.

What would European parents do?
God forbid a terrorist network embarks on a comparable “recruiting effort” in European democracies. For decades, Europe turned a blind eye, declaring the PKK as nothing more than a problem of far-away Türkiye, nothing of any concern. But things are changing. The normally indifferent media, even the normally uninterested politicians, realized that after the Christmas riots orchestrated by the PKK’s Paris network, things were no longer the same. Far-away Türkiye? No way – Paris’ 10th District in the heart of the metropolis.

Türkiye has been telling its allies and partners in Europe for years: The PKK is not only Türkiye’s problem. It is a terrorist organization that seeks anarchy and bloodshed wherever it operates. It can attack anywhere, anytime.

However, if Türkiye’s European partners would finally do what Türkiye is doing, that is working hard on ending all illegal activities on a country’s soil – money laundering, drug trafficking and human trafficking – the PKK would be history albeit being responsible for 40,000 deaths of innocent men, women and even children. Those citizens will never be forgotten.

On the one hand, the Paris riots were a shocking wake-up call for Europe; on the other hand, this article took the First International Child Watch Congress as a base to depart from an enormous step forward. It would be a timely thing, the right thing to do to bring the mother’s fight nearer to European audiences as well.

Respect, sincere respect to all mothers and fathers involved. Let all children return home safely as quickly as possible.

Klaus Jurgens is a political analyst and journalist with over twelve years experience in Turkish affairs.

A must read book: you²
Russians bought more property in Turkey in 2022 than in the previous six years combined