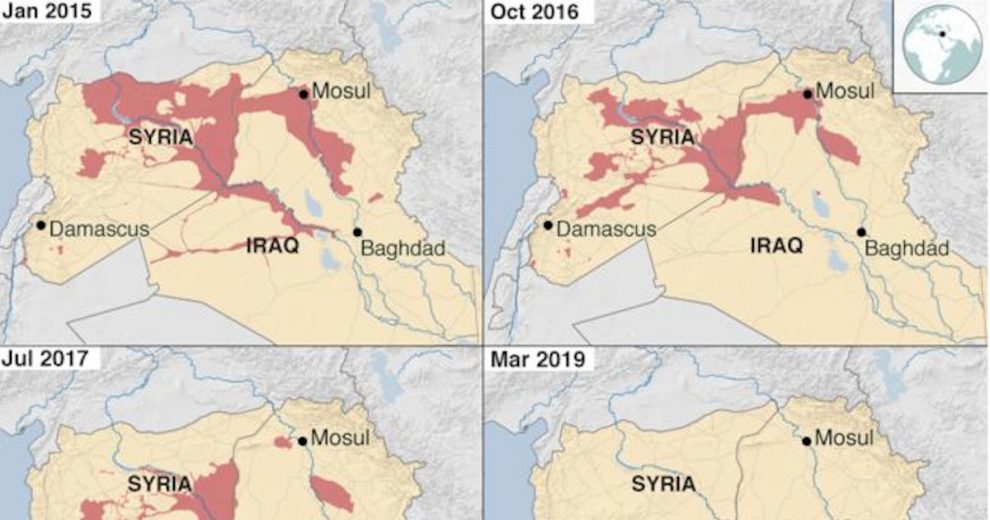 The US told the world it was only arming the Syrian Defence Forces (SDF), made up of the YPG – the Syrian branch of the PKK terrorist organisation – to defeat Daesh, yet it has allocated $300 million for the SDF in 2020 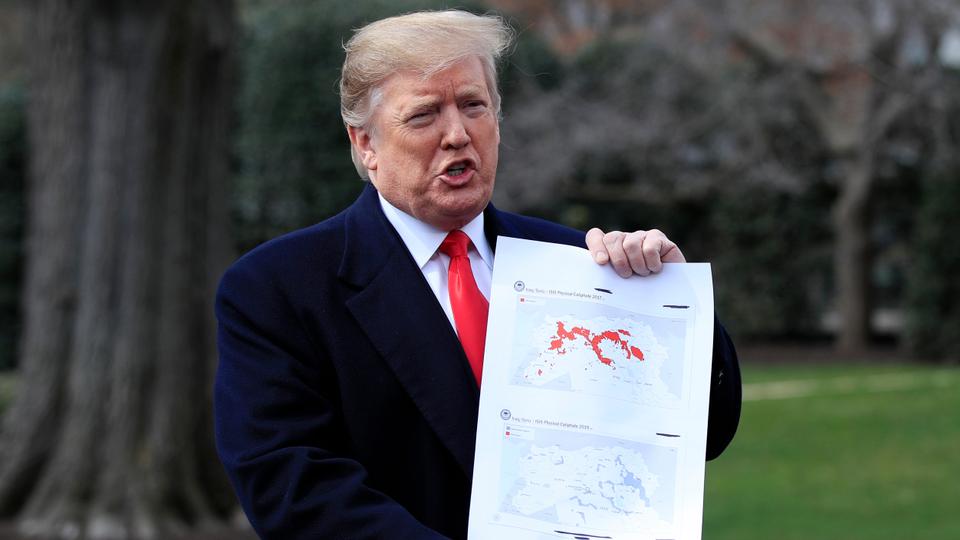 On March, 2019, US President Donald Trump said, while showing a map of the Middle East to reporters: “I brought this out for you because — this is a map of, everything in the red, this was on election night in 2016. Everything red is ISIS [Daesh].

“When I took it over, it was a mess. Now, on the bottom, that’s the exact same: There is no red. In fact, there’s actually a tiny spot, which will be gone by tonight.”

Soon after that, Trump claimed that 100 percent of the territory had been taken over.

The US and the YPG have been collaborating in northern Syria since 2015, when Washington cobbled together the so-called Syrian Democratic Forces (SDF) to fight the growing presence of Daesh in the region.

While fighting against Daesh, the US armed the YPG under the cover of Syrian Democratic Forces (SDF), a terror group whose existence is a threat to its NATO ally, Turkey.

The US stressed several times that the arming process was temporary and the supply of weapons and ammunition would be limited to what the YPG need to carry out specific operations against Daesh.

The YPG is accused by the UN Commission of Inquiry of violating human rights and attacks on civilians in Syria. Released in March 2018, the report said that the SDF has conscripted children, including girls and 13-year-olds, against their will.

“As part of forced conscription campaigns in areas under its control, the SDF continued to conscript men and children for military service throughout the reporting period,” the report said.

Turkey has been fighting Daesh at home and abroad since 2013 and has neutralised more than 3,500 terrorists and arrested more than 5,500 in this time.

Turkey has repeatedly said that fighting terrorists by using another terrorist group is folly and against the spirit of international law, and is a threat to the internal security of Turkey. The PKK’s war on Turkey has resulted in the deaths of more than 40,000 civilians and soldiers.

So the question is: if the US was just arming the YPG to defeat Daesh, why are they still planning to arm them after the group has been defeated?

The future of the US relationship with the YPG

To contain the looming security threat, Turkey went ahead with Operation Peace Spring on October 9, entering northern Syria. US mortar shells have been found in northeastern Syria in ammunition stocks belonging to YPG/PKK.

Although the US and Turkey have agreed that the latter would halt its military operation and allow the YPG to pull back from border areas, the US Department of Defense has already allocated $300 million to its military project in northern Syria for 2020.

Security analyst Abdullah Agar, however, believes that the US will be unable to completely withdraw its support from the YPG.

Agar told TRT World: “The US aims to legitimise its existence in the region under the cover of fight against terrorism by presenting the SDF/YPG as ‘freedom fighters’. As for coming to the main aim, the US wants to establish a legal, secular state which would get support from the Western countries in the region and act like its satellite.”

A top commander in the Syrian Defence Forces, codenamed Mazloum Kobani, has a planned trip to the US which could be part of a PR push, Agar said. He explained: “Marketing Mazloum Abdi [Kobani] is a part of this operation as they want to label him as a well-known hero in the international area.”

How the PKK gained its foothold in Syria

The PKK used Syria as a base from 1979 to 1998 and during this process, it gained ground for itself in northern Syria. After the Adana agreement between Turkey and Syria in 1998, Damascus ended its support of the PKK and expelled its leader Abdullah Ocalan. After that, the PKK has kept a low profile in northern Syria.

In 2002, under the name of the so-called Kurdistan Freedom and Democracy Congress, terrorists created new branches in Iraq, Iran and Syria to implement Ocalan’s adopted ideology of ‘Democratic Confederalism’ in host states.

The ‘KCK-Rojava’ was created to obscure the PKK’s various offshoots and in Syria, the KCK includes the PYD and YPG. Furthermore, the Movement for a Democratic Society (TEV-DEM) was launched to implement Democratic Confederalism in Rojava.

Before the fight against Daesh began in 2011, the concept of Rojava was an idea inspired by the PKK to collect all its forces under the same roof. Many in the West have started viewing the YPG as ‘freedom fighters’ despite the classification of the PKK as a terrorist organisation.

On the one hand, the US treats YPG officials as equals and on the other, the leadership are branded as terrorists.

Agar said: “Because of PKK’s reputation as terrorists, in the eyes of the world, the US is now working on creating a new identity to maintain its support to SDF/YPG in a legitimised way.”

Now once again, US officials are planning to meet with SDF/YPG’s so-called commander Kobani, whose given name is Ferhat Abdi Sahin, a terrorist linked with the PKK.

Kobani was responsible for the PKK’s organisational structure in Europe from 1997 to 2003. He was a member of the executive board of the PKK’s high command in 2005.

After arriving in Syria in 2012, Kobani gradually advanced his position in the field while fighting  against Daesh. He made contact with international forces, primarily the United States, in the fight against Daesh.

Turkey has stated its concerns several times that the arms and support provided by the US would be turned on Turkey. During the latest Turkish military operation in northern Syria, the YPG used RPG-7 launchers to hit a Turkish tank, and fired heavy mortars into Turkish neighbourhoods, which killed at least 17 civilians and injured 36.

The facts Ilhan Omar won’t see
Whose Syria is it anyway?
Comment