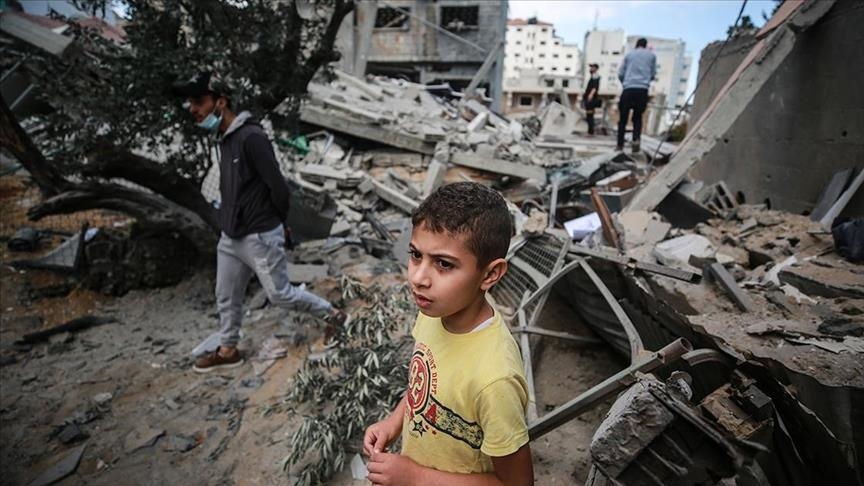 As Israel ramps up its military operations in the occupied East Jerusalem and the Gaza Strip, many Arab states have been forced to walk a diplomatic tightrope, particularly those that established official relations with the Jewish state in the last year.

Some Arab countries have tried to balance offering public relations gestures to appease local opinion, with avoiding jeopardizing relations with Israel. Yet given the severity of the violence, such mild stances may further indicate a loss of concern for Palestinian lives and their hopes for statehood.

The United Arab Emirates’ (UAE) response is central, after it, along with Bahrain, normalized relations with Israel in the “Abraham Accords”  in September 2020. The UAE attempted to present this as a diplomatic victory in halting Israel’s planned annexation of the West Bank and easing its occupation of the Palestinian territories.

Israel’s attempts to expel Palestinian residents from the Sheikh Jarrah neighborhood, and its security forces’ attacks towards protesters, ultimately deal a blow to the UAE’s diplomatic pretense, while further showcasing how little leverage it has over Israel.

As with other Islamic countries that have relations with Israel, the escalation over Al Aqsa Mosque and Haram al-Sharif (Temple Mount) made it necessary for the UAE to voice concern over their status, given the importance of these sites in Islam. The Emirati Ministry of Foreign Affairs on April 26 said it “expressed concern over the acts of violence committed by right-wing extremist groups in the occupied East Jerusalem, which have resulted in injuries among civilians.”

It also said it “called upon the Israeli authorities to assume responsibility toward de-escalation and putting an end to all aggressions and practices that perpetuate tension and hostility.”

The criticism, however, was directed at the extremist groups, and it avoided condemning the Israeli government. Moreover, it is an isolated incident of the UAE expressing concern for Palestinian rights. On May 14, the UAE’s Minister of Foreign Affairs Sheikh Abdullah bin Zayed simply voiced concern over the escalating violence in Gaza, indicating the UAE’s wishes to take a more “moderate” position like those of the United States and other Western countries, which have merely called on “both sides” to de-escalate, though supporting Israel.

Emirati media outlets have also refrained from condemning Israel, showcasing Abu Dhabi’s attempts to sway public opinion. The UAE daily Al-Ittihad posted the headline, “No to violence and hate,” with a tepid end to “tensions” in East Jerusalem, without directly calling out Israeli security forces’ actions. Similarly, the Emirati broadsheet newspaper Al Khaleej framed Israeli strikes on Gaza as a “response” to rocket fire by Palestinian factions from the besieged coastal strip, without connecting the rocket fire to Israel’s actions in Jerusalem.

Some Twitter users highlighted that during Israel’s escalation in Jerusalem, adverts in downtown Dubai were encouraging residents to holiday in Israel, further showing Abu Dhabi’s desires to portray Israel positively.

Far from being isolated individual viewpoints, however, such figures reflect the UAE’s attempts to sway public opinion, given the government’s tight control over freedom of speech.

Abu Dhabi is clearly going beyond giving vague public relations statements, and it now seeks to promote support for Israel, which could further secure the UAE’s growing cooperation with Israel.

On the other hand, Saudi Arabia has adopted a more damning tone of Israel, despite being in a difficult situation over the violence. The pro-government newspaper Al Riyadh published a story using the term “aggression” to describe Israel’s activities at Al-Aqsa Mosque. Another Saudi newspaper, Al Okaz, described an attack on a residential building that killed two leaders of the Palestinian Islamic Jihad (PIJ) as “violent bombing”.

And in contrast with the UAE foreign minister’s lukewarm tone, Saudi Arabia’s Foreign Minister Prince Faisal bin Farhan al Saud condemned on May 16 what he called Israel’s “flagrant violations” of Palestinian rights, and called on the international community to end Israel’s operations.

However, it is no secret that Saudi Arabia also seeks stronger covert relations with Israel. An eventual normalization could also help it save face with the United States, as Biden’s administration pressured Riyadh over the killing of Washington Post columnist Jamal Khashoggi and the Yemen war. Saudi Crown Prince Mohammad bin Salman’s not-so-secret meeting with Israeli Prime Minister Benjamin Netanyahu in the Saudi NEOM city last November revealed the Crown Prince’s desires to upgrade ties with Israel.

Yet given that Saudi Arabia fears a huge backlash across Islamic countries over potential relations with Israel, with its role as the custodian of two of Islam’s holy cities, Mecca and Medina, it would prefer to adopt a more critical stance on the surface, particularly as Jerusalem’s status is a contentious issue.

Qatar has upheld its traditionally anti-Israel public stance, which has been stronger than that of other Gulf countries. While it has had some cooperation with Israel, largely through providing humanitarian aid to Gaza and Hamas via Israel, it also hosts some key Hamas figures.

Doha has stated that it will not normalize with Israel until Palestinian statehood is achieved. Qatar’s Assistant Foreign Minister Lolwah al-Khater also condemned the response of several Western media outlets and politicians towards Israel’s actions in the Palestinian territories, saying that “many politicians and the money-driven media are still dealing with Palestine as if it is under guardianship.” For Doha, there is little to sacrifice, given its past stance towards Palestine and Israel.

Echoing the UAE’s public stance, Bahrain said it hopes the current violence will be addressed in a “fair and equitable manner”, while also avoiding any explicit criticisms of Israel or sympathy with Palestinians. It may therefore struggle to balance its ties with Israel and the large pro-Palestinian protests in the capital Manama.

For Egypt’s part, despite its opposition to Hamas and its assisting of the blockade on Gaza with Israel, Cairo has received several injured Gazan citizens into its hospitals. Kuwait, however, which has avoided normalizing relations with Israel and condemned its actions on the Palestinian territories, may still hope to continue this stance, to avoid a backlash over potential relations with Israel.

Meanwhile, Morocco faced domestic pressure after normalizing ties with Israel last December, and the situation in Gaza and Jerusalem could further scrutinize its relations with Tel Aviv. Its leaders King Mohammad VI and Prime Minister Saad Eddine el Othmani have shown sympathy with the Palestinians, and Rabat announced a large aid package for Gaza and the occupied West Bank, which could further aim to appease opposition towards its relations with Israel.

While the violence continues, Arab states clearly face a growing challenge, and many would hope the crisis soon subsides due to what is at stake for them diplomatically. Those that have avoided normalized relations with Israel thus far will more than likely want to sit it out even longer.