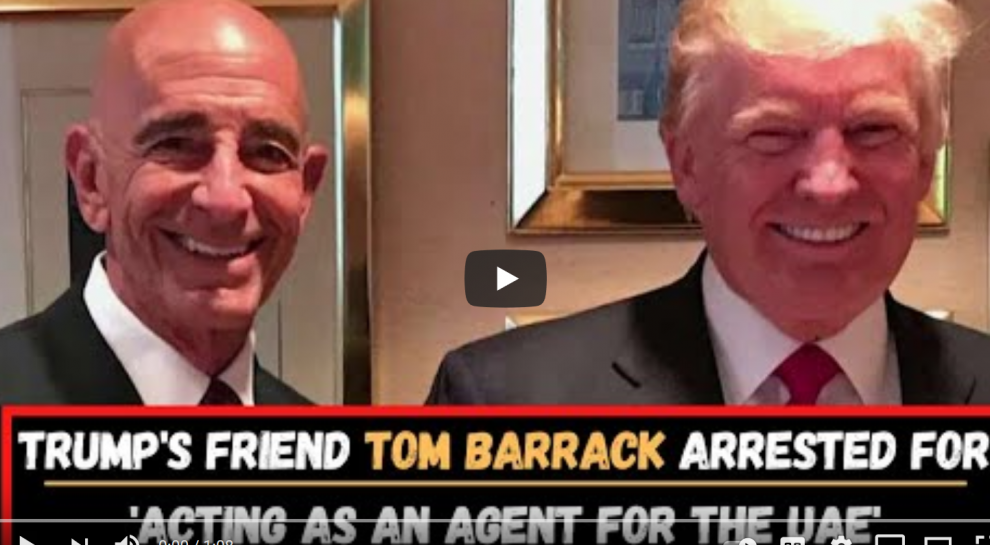 This month’s indictment of a billionaire, one-time advisor and close associate of former US President Donald J. Trump, on charges of operating as an unregistered foreign agent in the United States for the United Arab Emirates highlights the successes and pitfalls of a high-stakes Emirati effort to influence US policy.

The indictment of businessman Thomas  J. Barrack, who maintained close ties to UAE Crown Prince Mohammed bin Zayed while serving as an influential advisor in 2016 to then-presidential candidate Trump and chair of Mr. Trump’s inauguration committee once he won the 2016 election, puts at risk the UAE’s relationship with the Biden administration.

It also threatens to reduce the UAE’s return on a massive investment in lobbying and public relations that made it a darling in Washington during the last four years.

A 2019 study concluded that Emirati clients hired 20 US lobbying firms to do their bidding at a cost of US$20 million, including US$600,000 in election campaign contributions — one of the largest, if not the largest expenditure by a single state on Washington lobbying and influence peddling.

The indictment further raises the question of why the Biden administration was willing to allow legal proceedings to put at risk its relationship with one of America’s closest allies in the Middle East, one that last year opened the door to recognition of Israel by Arab and Muslim-majority states.

The UAE lobbying effort sought to position the Emirates, and at its behest, Saudi Arabia under the leadership of Crown Prince Mohammed’s counterpart, Mohammed bin Salman, at the heart of US policy, ensure that Emirati and Saudi interests were protected, and shield the two autocrats from criticism of various of their policies and abuse of human rights.

Interestingly, UAE lobbying in the United States, in contrast to France and Austria, failed to persuade the Trump administration to embrace one of the Emirates’ core policy objectives: a US crackdown on political Islam with a focus on the Muslim Brotherhood. UAE Crown Prince Mohammed views political Islam and the Brotherhood that embraces the principle of elections as an existential threat to the survival of his regime.

In one instance cited in the indictment, Mr. Barrack’s two co-defendants, a UAE national resident in the United States, Rashid Al-Malik, and Matthew Grimes, a Barrack employee, discussed days after Mr. Trump’s inauguration the possibility of persuading the new administration to designate the Muslim Brotherhood as a designated foreign terrorist organization. “This will be a huge win. If we can list them. And they deserved to be,” Mr. Al-Malik texted Mr. Grimes on 23 January 2017.

The unsuccessful push for designating the Brotherhood came three months after Mr. Barrack identified the two Prince Mohammeds in an op-ed in Fortune magazine as members of a new generation of “brilliant young leaders.” The billionaire argued that “American foreign policy must persuade these bold visionaries to lean West rather than East… By supporting their anti-terrorism platforms abroad, America enhances its anti-terrorism policies at home.”

Mr. Barrack further sought to persuade America’s new policymakers, in line with Emirati thinking, that the threat posed by political Islam emanated not only from Iran’s clerical regime and its asymmetric defence and security policies but also from the Brotherhood and Tukey’s Islamist government. He echoed Emirati promotion of Saudi Arabia after the rise of Mohammed bin Salman as the most effective bulwark against political Islam.

“It is impossible for the US to move against any hostile Islamic group anywhere in the world without Saudi support…. The confused notion that Saudi Arabia is synonymous with radical Islam is falsely based on the Western notion that ‘one size fits all,’ Mr. Barrack asserted.

The Trump administration’s refusal to exempt the Brotherhood from its embrace of Emirati policy was the likely result of differences within both the US government and the Muslim world. Analysts suggest that some in the administration feared that designating the Brotherhood would empower the more rabidly Islamophobic elements in Mr. Trump’s support base.

Administration officials also recognized that the UAE, Saudi Arabia, and Egypt constituted a minority, albeit a powerful minority, in the Muslim world that was on the warpath against the Brotherhood.

Elsewhere, Brotherhood affiliates were part of the political structure by either participating in government or constituting part of the legal opposition in countries like Kuwait, Iraq, Yemen, Bahrain, Morocco, Jordan, and Indonesia.

The affiliates have at times supported US policies or worked closely with US allies like in the case of Yemen’s Al Islah that is aligned with Saudi-backed forces.

In contrast to UAE efforts to ensure that the Brotherhood is crushed at the risk of fueling Islamophobia, Nahdlatul Ulama, one of, if not the world’s largest Muslim organization which shares the Emirates’ rejection of political Islam and the Brotherhood, has opted to fight the Brotherhood’s local Indonesian affiliate politically within a democratic framework rather than by resorting to coercive tactics.

Nahdlatul Ulama prides itself on having significantly diminished the prospects of Indonesia’s Brotherhood affiliate, the Prosperous Justice Party (PKS), since the 2009 presidential election. The group at the time successfully drove a wedge between then-President Susilo Yudhoyono, and the PKS, his coalition partner since the 2004 election that brought him to power. In doing so, it persuaded Mr. Yudhoyono to reject a PKS candidate as vice president in the second term of his presidency.

Nahdlatul Ulama’s manoeuvring included the publication of a book asserting that the PKS had not shed its links to militancy. The party has since failed to win even half of its peak 38 seats in parliament garnered in the 2004 election.

“Publication of ‘The Illusion of an Islamic State: The Expansion of Transnational Islamist Movements to Indonesia’ had a considerable impact on domestic policy. It primarily contributed to neutralizing one candidate’s bid for vice president in the 2009 national election campaign, who had ties to the Muslim Brotherhood,” said militancy expert Magnus Ranstorp.